For two whole weeks everything that happened in the Maynard household revolved around one fact: Felicity was coming home.

So begins The Trysting Place, one of your early, out-of-print trad regencies (and a prequel to The Notorious Rake). I loved the opening of this story, in which we see eighteen year old twins Lucy and Laura acquiring new muslin dresses, Mrs. Maynard telling the housekeeper to use only the best linens throughout the house and Mr. Maynard seeing to his estate so that Felicity would be persuaded of its prosperity. 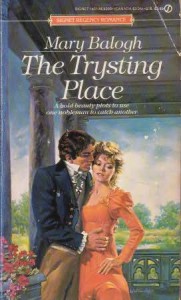 Felicity has been absent from home for five years, and her parents and sisters are eager to see her. Meanwhile, Felicity (who in a title mishap, is referred to as both "Lady Felicity Wren" and "Lady Wren") is in her carriage, remembering her last few visits to her parents' home. Although she'd been grateful to see her family members doing well, Felicity had found those visits difficult, since the unhappy Felicity had had to convince her parents of her happiness.

Worse than that, Felicity had dreaded running into her old suitor, Tom. Tom and Felicity were childhood friends who fell in love, but one day, the beautiful Felicity was spotted at a ball by an elderly and rich man who proceeded to offer for her. Felicity's parents, on the brink of financial ruin, pleaded with their daughter to accept Sir Wilfred's suit, asking if she could bear to see her family in the poorhouse when she could save them. Though desperately in love with Tom, Felicity married Sir Wilfred.

Sir Wilfred had not been unkind to Felicity, but he was very possessive of her, so now for the first time in eight years she feels free. A wealthy widow, Felicity is determined to conquer society, to be happy, carefree and dazzling, and for that she will need a glamorous husband. The simple country life that would have contented her had she never married Sir Wilfred is no longer enough, and she is grateful she didn't marry Tom, who is surely a dull farmer now.

Tom is indeed a farmer, but even after eight years, he still carries a torch for Felicity. He knows he will always love her, that there is no other woman for him. But he also knows that the world is now Felicity's oyster and it is unlikely that she will return his feelings. He tells himself he will pay a single call on Felicity, and leave it at that.

Of course, things don't go according to Tom and Felicity's plans. Felicity finds Tom charming and dear-‘as a friend, or so she tells herself. And Tom finds that as long as Felicity cares for him, even if in a platonic way, he will gladly take what she is willing to give him until she marries another man.

When Felicity's twin sisters persuade Felicity to take them to London with her so they can have a season, Tom decides to accompany their party. He will look out for Felicity as long he can bear to do so, he tells himself. What he does not anticipate is Felicity's infatuation with Edmond, Lord Waite.

Felicity sets her cap for Waite, who is nearly betrothed to another woman and interested in Felicity only as a potential mistress. She can change Lord Waite's mind, Felicity is sure, if Tom will help her by making Edmond jealous-

I thought the beginning of this book was quite promising, since I started out feeling for both Tom and Felicity. I could see that Felicity had done a number on herself where Tom was concerned. While married to Sir Wilfred she could not have Tom, so she convinced herself that Tom would not have made a good husband for her. Her self-delusion had been a coping mechanism, so in the first third of The Trysting Place Felicity had my complete sympathy.

Fans of The Notorious Rake should know that Edmond, Lord Waite is portrayed somewhat differently from the way he comes across in that book; here he is colder and more high in the instep, which makes him a good foil to Tom. Tom is a wonderful character, warmer, more loving and far more devoted to Felicity than Edmond (based on his depiction in this book alone) could ever be, but Felicity is blind both to Tom's true value and to Tom's feelings for her.

Felicity doesn't understand her own emotions either, and so she gives the two men mixed signals and strings them both along. Somewhere along the way my patience with Felicity began to dwindle. I had tremendous sympathy for the suffering Tom, who was truly a jewel, and, because I had read The Notorious Rake first, though it was published later, I even felt some sympathy for Edmond. Felicity's confusing and tormenting of the two men went on so long that I became exasperated with her.

It was hard to believe Felicity could remain as blind as she was for as long as she did, so her portrayal did not ring true. It didn't help that she was also a virgin widow, which is not one of my favorite romance tropes. To top it all off, though twenty-six, she didn't have half the maturity of her eighteen year old sisters, and struck me as a flighty, neglectful chaperone.

[spoiler]At the end of the book, Tom assures Felicity that he will "see to everything" which could only mean her situation with Edmond. I was frustrated because I wanted Felicity to take responsibility for her own actions and clean up her own mess. Instead there's this:

"Oh, Tom," she said, grasping his arm and relaxing against it, "if you just knew how I have longed to lean on you entirely. I am not at all the strong, independent widow that many people take me for. Can I really leave everything to you? I don't have to worry any longer?"

London life is frequently contrasted with life in the country and found wanting in The Trysting Place. It is implied over and over that country life is more meaningful; one would get the impression from reading this book that with the exception of a few side characters, only superficial gossips and snobs inhabited Regency London, while people in the country had more substance.

Perhaps this was intended to reinforce that Felicity's valuing of London life with Edmond over country life with Tom is wrongheaded, but as a city dweller, I dislike these stereotypes. As an aside here, why is it that so many books hold up country life as somehow superior to life in a city?

It may sound from this review like I did not enjoy the book at all, but that would not be true. I loved the character of Tom and I loved the moving beginning of the story. I also enjoyed the secondary storylines involving Felicity's two twin sisters, Lucy and Laura. There was an especially nice chapter in which something happens to each twin which she does not expect.

Felicity's younger brother Adrian, a prankster, was also a delightful character. In actuality so many parts of this book were so very well written (I bookmarked several pages I liked with post-it notes) that my frustration stems from my feeling that this book could have been truly great.

We've all read books in which the hero takes for granted the heroine who has loved him for years, while being dazzled by a more glamorous beauty. The Trysting Place takes that trope and reverses the genders, and I think the results could have been amazing if Felicity had been portrayed more consistently and believably.

Weighing the weakness of Felicity's characterization against the strengths of Tom, the side characters, and the powerful opening scenes, I have decided that for me, The Trysting Place was a mixed bag and a C/C+ read.