Less than twenty-four hours after fleeing to Paris, Maya Sinclair is the prime suspect in a brutal murder-‘and targeted by the real killer. When she’s viciously attacked in the gardens of Versailles, Maya barely escapes with her life thanks to sexy French journalist Simon Girard.

Simon has been investigating the mysterious death of his brother, an art forger with ties to the woman Maya is suspected of killing. Still healing from heartbreak of his own, Simon reluctantly joins forces with Maya, who has awakened feelings within him he thought long dead.

Their search for answers uncovers the existence of a secret society, and puts them on a quest to find a missing crucifix rumored to hold the key to everlasting life. Together, Maya and Simon race through Paris one step ahead of a killer who will do anything to ensure some secrets remain buried forever… 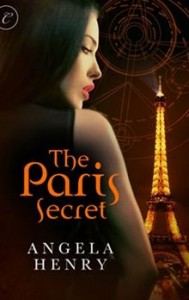 What made me want to read your novel is that 1) it’s set in Paris and 2) the hero is French. What made me happy to discover along the way is 1) the heroine is biracial and I’d love to see more of that in books and 2) the hero isn’t stereotypical. So yeah, the plot got a little strange at the end but with all it’s got going for it, it’s still a story I enjoyed.

The book is filled with details of Paris which sound like either you’ve done your research well or that you’ve spent some time actually wandering around the city and soaking it up. I always enjoy books like this that give me a feel for a place and don’t just use the setting as a wallpaper backdrop.

Though Simon is one sexy guy, he’s much more than just a sexy French guy who’s a good lover. He’s a man on a mission to solve his brother’s murder first and interested in Maya second. He also doesn’t just sound like an American character dolled up to seem French nor does he look down on Maya just because she’s American. He’s got some private angst in his background but he doesn’t trot it out nor swear off love. And he’s slightly insulted when Maya – mistakenly – thinks he’s had sex with her while romantically involved with another woman.

Maya is an interesting character too. I admire her for heading off on her dream vacation even after her scumbag boyfriend leaves her and for starting to enjoy the trip to the hilt once she gets there. That does actually end up getting her involved in the whole situation but she’s no wilted cabbage over the loss of a man. She keeps her head on straight and – yeah! – uses her librarian skills to solve the mystery. The parallel between her situation as a biracial woman with family issues and that of the historical Sister Louise-Marie Therese, the Black Nun, is a unique slant for the plot but I wish Maya’s thoughts on it had gotten a little more air time.

The mystery and reason for the murders is a bit hard to swallow and I think it would help for readers to be interested in historical conspiracy theories. I could go along with things as long as it was all just a bunch of historians trying to prove a point and find a treasure. But at the end, when certain things were revealed about one character and the location of the treasure was discovered, for me the train jumped the tracks.

There was also too much deus ex machina. These two are on the run not only from a murderer but also wanted for questioning by the Paris police but just in the nick of time, Simon always has yet another friend who owes him a favor allowing Maya and Simon out of their ‘painted into’ corner. I didn’t like the crazy villain but admit that the death of one villain and the turn the story took then was a surprise. The open ended romance also worked for me as I think Simon and Maya ought to get to know each other under better circumstances.

Okay so while the mystery part of the plot didn’t work quite so well for me, I do like a lot of what you did with this book. And for readers looking for different characters who avoid being cliched, it’s a good bet. B-

→ Jayne
Previous article: Beyond the Book: Maya Banks on why she wrote a romantic suspense series
Next Post: Tuesday Midday Links: Self publishing stock rises and so does traditional publishing