One of the first AAR DIK books I ever read was one of yours: “Walking After Midnight.” Now here I am, years later, reading another “walking” book that involves a hero and heroine on the run and trying to stay alive. My questions for myself as I started the book were will the romance work, will the suspense work and how will I feel about the thief hero when all is said and done. The answers are yes, partly, and ultimately it’s a cop out.

“For years after witnessing the murder of her mother, Micayla “Mick” Lange has been forced to relive the horrific events of her dreams, often causing her to sleepwalk. Now a Detroit cop, and stinging from a recent breakup, Mick has arrived early to housesit during the holidays for the wealthy father of her longtime best friend. When she catches Jason Davis in the act of stealing a large sum from the home safe, Mick finds herself embroiled in a crime so explosive it could cost both of them their lives. Although their attraction to each other is palpable, as natural adversaries their only common ground is mutual distrust – and the fact that the same killers are now hunting them both. Sparks fly and passions flare as Mick and Jason run for their lives, knowing that teaming up is the only chance they have to survive.” 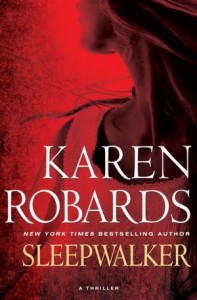 The book gets off to a quick start with a throw down that shows Mick and Jason just how evenly matched they are. Mick might be littler but she can put a hurting on anyone stupid enough to discount her in a fight. But when proof of a horrific crime stares her in the face and she realizes that her knowledge is known, she has no choice but to flee with this crook she just caught red handed. This is one of the better set ups that forces the bickering hero and heroine on the road together that I’ve read. In a flash, Mick’s whole world is flipped and it’s she who does the most to get them away from the henchmen – something that I truly enjoyed. She doesn’t want to do this but once she makes up her mind, she’s the one leading the charge. I did wonder how she’d managed to remain in total denial about the true nature of the main villain, though. That must have taken some mental hoop jumping of major proportions.

The race away from the killers is one of the best parts of the book. There’s enough trash talking to keep the tension between Mick and Jason wound tight plus a little sexual frisson which – thank God – doesn’t lead to inappropriately timed boinking. Several thugs are still after them, forcing our lead characters through the bitterly cold, snowy night, just barely missing being caught time and again. But caught I knew they’d eventually have to be and it’s done realistically and due to the fact that Mick is a cop with ingrained instincts. Makes sense. Yet, I also think most people will see the twist coming that brings Mick and Jason into the hands of the baddies.

That entire scene is cool and I sat riveted to see how they’d escape from handcuffs, several men who weren’t going to hesitate to kill them, and through a steel reinforced door. Jason’s calm under pressure is a joy to see and his humor in the setting of a large percentage of the DPD being hot on their tails needles Mick in a way that had me laughing.

Now, this is the point where the suspense stuff begins to go pear shaped. I’m willing to go along with how you get these two out of Detroit. I can also accept the sweet little set up Jason and his cronies have going. And the explosion of Happy Boinking between Jason and Mick is inevitable given the sparks that are being struck between them. I can also trust Jason’s realization of how much Mick means to him and not just because of the hot lovin’. She’s more than that to him and given the life or death situations that they’ve gotten into and out of, I think they know each other and their feelings pretty well by this time. But…but…I did some serious eye rolling from here on out about the suspense.

The baddies had to make a return if only because they hadn’t been dealt with. Suddenly Mick lying to Jason about what she did was alright. And given Jason’s history – he only robs from crooks so that makes it all okay – he still has contacts in a Big Government Agency who are deliriously happy to help them out when it’s discovered that Mick is being blackmailed by the killers to return to Detroit – in a way that makes me wonder why none of these smart people realized it was a given it would happen this way. And everything that could go wrong does go wrong yet – booyah! – it’s Mick who mainly saves the day.

I gotta say that I have serious doubts about the rainbow happy ending. No one is going to discover where Jason lives by following him or – later – Mick back to the Bat Cave? No associates of the villain will make trouble for the rest of Mick’s family? She’s going to be okay living with a thief who, at the end of the day, has no plans to quit? But, that’s right, he’s a Disney thief who only steals from crooks so I guess she can accept that. I suppose she won’t be tied up for ages taking part in the trial of the villain or his minions either. It’s off to Jason’s sunny little hideout to put cracks in the wall plaster and shock the iguana.

After how good lots of the previous parts of the book are I hated to see it all go wonky at the end. Sigh.