I loved your 2009 book, Scandal, and very much enjoyed Indiscreet, which came out later the same year. So when I learned that you were publishing a new historical called Not Wicked Enough I got excited, and asked Jane if she could send me the ARC. Having now read it, I have mixed feelings about Not Wicked Enough. The novel has quite a bit of elegance and charm, but it’s in a lighter vein than Scandal and Indiscreet and was not quite as satisfying to me. 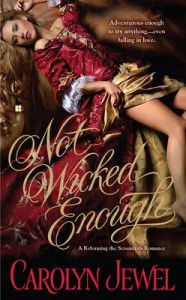 Lily Wellstone arrives in Bitterward, the home of her widowed friend Ginny, at night and in the middle of a downpour. Occupying the entrance hall is an unsmiling gentleman in rough clothes. Yet despite his ill-fitting attire, Lily correctly identifies him as Ginny’s older brother, the Duke of Mountjoy. Lily and Mountjoy converse and when Lily mentions that she is rarely tired enough to sleep before four in the morning, Mountjoy shows her to the library.

Once there, Mountjoy learns from Lily that she is a wealthy heiress, the owner of Syton House, a very prosperous property, and that she was once disowned by her father for her wild nature. Lily offers to leave Bitterward before Ginny learns of her arrival, but Mountjoy, who finds her uncommonly attractive, welcomes her into his home despite the misgiving that Lily may “disrupt his peaceful country existence.”

Mountjoy is not wrong about that, since Lily proves to be a “managing” kind of woman, a bit like Sophy in Heyer’s The Grand Sophy, but more whimsical and less madcap. Lily likes to take others in hand and assist them in finding happiness by enticing them to have fun.

Lily’s first and foremost project is Ginny, who has been mourning her late husband too long, to a point of isolating herself and not allowing herself to enjoy life. Under Lily’s encouragement, Ginny begins to blossom once more, to wear colors and smile again.

But Lily does not confine herself to amusing Ginny alone, she also engages Mountjoy’s near-fiancée Miss Jane Kirk, and his brother Nigel, in such experiments as writing with glowing (and flammable) phosphorous ink. Which would be bad enough, to Mountjoy’s thinking, even without Jane’s suggestion that she write “Mountjoy has not smiled these seven years.”

Although Mountjoy and Jane are not betrothed, the entire neighborhood, Mountjoy included, expects they eventually will be. That Jane is shy and even fearful in his presence is disconcerting to Mountjoy.

Mountjoy and Lily encounter each other at night, when Lily wanders the house or the gardens because she has difficulty sleeping. The first time they meet in the garden, they kiss and then restrain themselves from succumbing to their mutual attraction.

That same night, Lily shows Mountjoy the medallion she says she received from a gypsy king in thanks for rescuing his dog. The gypsy king promised the medallion would unite its wearer with the person with whom he or she “is happiest in love.” But Lily does not expect that will happen for her, since she has already met that man.

Lily loved and still loves Greer, a soldier she meant to marry who died in the war before their union could come to pass. It’s been five years since Greer’s death, but Lily does not believe she will ever love again. Nonetheless, she still has an appreciation for a man’s body and has not forgotten carnal pleasure.

Thus it happens that Lily and Mountjoy become lovers, although neither of them admits that is what they are. During their nighttime encounters, one thing leads to another, and another, and another. Eventually they become what today would be termed “friends with benefits,” neither intending to fall in love with the other, although they like each other very much.

Lily will never love again. Mountjoy will someday marry Jane. Yes, he should stay away from a gentlewoman who is also his sister’s friend. Yes, she shouldn’t touch her friend’s brother. But when there is so much pleasure to be had, how can they keep their hands to themselves?

Not Wicked Enough has considerable strengths to recommend it. First, the characters are delightful. Lily, for all she takes charge of others’ happiness, is endearing because of her generosity of spirit. Her desire to bring joy to her friends makes her appealing, as well as charismatic and outgoing.

Although she had a lonely childhood, Lily looks forward rather than back, and displays a great deal of strength of character regardless of the occasional moment of vulnerability. Her love of color, clothing, and other beautiful things, her sense of whimsy and adventure make her stand out in Mountjoy’s eyes like a bright, exotic flower.

Mountjoy is just as appealing, though in a subtler way. He was a gentleman farmer who came to prominence when it was discovered he was the heir to a dukedom, but he continues to dress like a gentleman farmer in an attempt to prove something to people who are superficial enough to dismiss him on the basis of his garments.

And that is not the only difference between him and Lily. Whereas she is extroverted, he is shy of crowds and social occasions. While she looks for ways to enjoy life, he is dedicated to hard work. And when she takes risks, he feels protective of her. (I especially appreciated that despite those protective feelings, Mountjoy does not attempt to control Lily but gives her the freedom to be herself. He also acknowledges at times that she is in the right and he is in the wrong.)

To add to the novel’s strong points, your writing style has a beautiful clarity that I love. There is smoothness to the writing that made me want to savor the words.

Still, while I liked Not Wicked Enough I found myself reading a few chapters and then putting the book down for the day. The reason, as best as I can articulate it, has to do with the relative absence of either external or internal conflict.

While Mountjoy was almost engaged, his near-betrothal never felt like a real obstacle to me. Although he kept thinking that he ought to propose to Jane, his heart was never in it, and it was also evident that Jane’s affections had settled on someone else.

Yes, Lily believed her own heart belonged with Greer and she could never love another, but since she rarely thought of Greer except to repeat this mantra, it was hard to feel that her disloyalty to Greer ever truly upset her. I also didn’t get much indication of what Greer had been like as a man, so I did not feel that Lily was haunted by her past love.

Additionally, the subplots didn’t have much forward momentum except near the very end of the book. Lily’s cousin the Marquess of Fenris skulks around Bitterward’s neighborhood for much of the story, but doesn’t really reveal his motives until close to the end. Nor do we find out the reasons behind Nigel’s odd behavior any sooner, although I guessed what was going on there early on.

Because of the above, and because Mountjoy and Lily were such good friends and lovers, and clearly got on like a house on fire, I didn’t feel their relationship faced real obstacles. The stakes felt relatively low, and consequently I wasn’t deeply driven to find out what would happen next. I also don’t know how much this book will stick with me. Still, while I read about them, the characters charmed and entertained me, and I enjoyed their sexy relationship and the hours I spent in their company. B-.