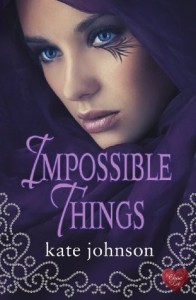 Has Bookpushers recommended this book to me and I really needed a break from contemporaries. There was so much to like about this fantasy romance that took place in some alternate world reality that included longboats, an empire, pirates and smugglers.  Our hero is Kael Vapensigsson, a twice marked warrior of the Chosen.

The Chosen are magic imbued humans who, with the help of crystals, are especially talented in certain areas. Tattoos appear on the body to indicate which gift a Chosen is given.  For Kael, he has two marks–one of a warrior and other mysterious mark which is revealed later in the book.

He is attempting to run down the source of a dangerous drug that poses a threat to the Empire when he comes across a slave that is thrice marked.  She’s been beaten and starved to the point of death but he can’t leave her there–a thrice marked Chosen. He fakes Ishtaer’s death and spirits her back to the Empire where she is fattened up, trained, and begins to recover from her physical wounds.

The romance kind of slips upon us which suited both the characters, particularly the heroine who suffered severe emotional, physical and sexual abuse prior to being rescued. But the romance plays a vital role as we watch the characters grapple with new feelings and then come upon the realization that what they feel is so strong that it must be love.

There are two major problems with this book. The heroine is a real Mary Sue.  She is beaten, blind, maimed but the only known thrice marked Chosen. Despite being blind she is able to fight seasoned Chosen warriors without training; she is able to heal wounds others can’t or won’t try. She graduates third fastest ever in the history of the Empire’s Academy in healing and first fastest in Foresight. She’s pretty perfect in every way except she’s too timid. Most everyone loves her including the other outcast Chosen who has a wooden leg, Kael and all his fierce warriors. Even a bully comes around to praising and recognizing the heroine’s worth later in the book.  In one scene, Ishtaer is able to rescue a grievously wounded Chosen by taking her pet wolf and one legged companion on a wild boat ride through the croc infested waters, avoiding poisonous darts, killing all enemies in her path (while blind) and burning the evil settlement–all because of her Chosen gifts of Seer, Healing, Fighting.

The second problem was the language. The character’s dialogue, in particular, was very modern for a historical fantasy set with longboats, horses, and swords. At one point, one of the “viking” characters comments about how cool something is. “Probably she was some runaway who thought tattoos were cool and had got herself kidnapped into slavery.”

But beyond those two issues, there is some very good character development between Ishtaer, as she gains confidence in herself, and Kael, who looks beyond his own circumstances and learns to overcome his fear of loss.  There are swashbuckling fight scenes and the author does a great job of grounding us in the world with descriptions of the political structure in the Empire and the land and scenery. I’d read this author again in this world. C+