I think most US citizens would agree with me that getting a visit from someone in professional attire who says, “We just need to speak with you a moment. We’re from the IRS.” is not a favorite way to start the day. Or end it. Discovering that your heroine, Tara Holloway, is a special agent of the IRS – someone with the job of tracking down the worst of the worst tax scofflaws – got me interested in trying the second in your series featuring her, “Death, Taxes, and a Skinny No-Whip Latte.” Parts of the book I found hard to put down. Yet there is also a whole latte (pun intended) that bored me as much as you say it bores Tara. 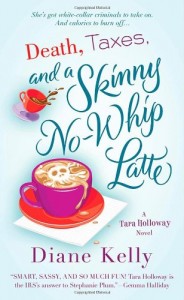 Tara Holloway, new agent in the Treasury Department’s Criminal Investigation team, has just been assigned a new case along with her partner Eddie Bardon. Marcos Mendoza is suspected of a whole host of crimes from loan sharking to murder. Past business associates have gone missing or – in the case of one unfortunate man – gone missing then turned up. In pieces. When the Texas Rangers failed to make a case that is strong enough to arrest him, desperate officials turn to the department that can always be counted on to bring down the bad guys – the IRS. Get ’em on tax fraud and they’re going down.

But in spite of all their determination, Tara and Eddie feel their wheels are spinning and the window of opportunity to catch Mendoza is closing fast. Plus families, boyfriends and BFFs are grumbling about the time being spent on the case. Tara and Eddie have to think, and act, outside the box. Can they come up with a plan that will nail this bastard and which is also within the law?

Yes, I have a fascination with the IRS. Kind of like watching a pride of lions at the zoo. Interesting to look at from a distance but I’ll pass on any close, personal interactions. Still, it’s nice to know the government is going after the worst of the worst so that maybe I don’t have to pay any more taxes than I already do. Tara is armed, she knows self defense and as her target practice shows, she’ll hit exactly what she aims at. She’s also smart – my hat is off to anyone who can remember the whole US tax code info – and determined. Once she’s assigned to a case, that case gets solved one way or the other.

The sections of the story which show Tara and her fellow agents using their knowledge of tax law and computer sleuthing are cool. Sort of frightening in a way but still seriously cool. The stakeouts I could take or leave. Well, leave mostly as they quickly turned into a total yawnfest. Tara buying her disguises is fine. The first bits about how the stakeout is done are also fine. Then there are some things which happen to Tara that definitely break up the monotony but at the same time, I found myself wondering what purpose these events served to advance the plot. Yucky old exhibitionists and punk robbers hold no fear for Tara but they also held no interest for me. And then the stakeout and the waiting went on. And on. ZZZzzzzzzzzzzzzzzz. Tara says these things are boring and damned if she isn’t right. When another stakeout got started I almost cried. Almost, mind you but I managed to refrain as I made the decision to skim instead.

You drop enough clues about how Tara is going to get the help needed to crack the case that I didn’t find the revelation to be a Revelation. The way it’s carried out is fun and a bit nerve racking. The way the “think outside the box” plan is arranged and executed made me sit up and pay attention again. The final take down is satisfying and there’s a nice wrap up to the case all around.

The cover quote compares Tara to Stephanie Plum. In some ways I agree with this but I don’t think it’s entirely accurate. Both have guns but Tara knows how to use hers and keeps it loaded. They’re both wisecrackers but Tara is competent at her job even as she jokes around. She’s also already getting nekked and having hot, sexy encounters with her hot boyfriend on a very regular basis. The new man in her life might make the series become more of a Ranger vs Morelli however I’m not sure I’ll be intrigued enough to keep following it. Balancing the pluses and minuses, this one clocks in at a C+ for me.