I first read The Temporary Wife, one of your most beloved trad regencies, several years ago. At the time, I liked it but was distracted by an initial similarity to another of your regencies, The Ideal Wife, which I had read first and liked even better. 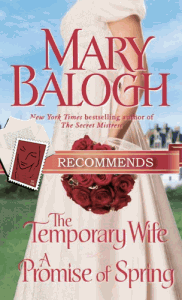 The opening premises of the two books are very much alike, but they shoot off in very different directions soon after that. Still, the similarity in how they begin makes it difficult not to compare them and choose a favorite. I suspect that in many cases, whichever of these two books a reader reads second will feel somewhat less original to that reader as a result of having read the other first.

Now that The Temporary Wife is finally being reprinted in a 2-in-1 edition along with A Promise of Spring, I was curious to revisit it and see how I would like it since it’s now been over a decade since I read The Ideal Wife and that book has faded from my memory. Happily, this time I enjoyed The Temporary Wife even more.

The Temporary Wife begins with the following sentence:

It not being quite the thing to advertise in the London papers for a wife, Anthony Earheart, Marquess of Stuanton, eldest son and heir of the Duke of Withingsby, advertised instead for a governess.

Anthony omits his title from the advertisement, which entertains his friends no end. They tease him mercilessly about his apparent need for a governess, when he has no children. It’s only later that he explains his purpose to one of them, Lord Rowling. He requires a wife, one who is a gentlewoman, but at the same time “impoverished, plain, demure, very ordinary, perhaps even prim,” with “all the personality of a—a quiet mouse.”

Lord Rowling asks if Anthony feels a strong need to dominate his future wife, and the marquess replies that his father the duke has summoned him home to marry a seventeen year old girl. Although the duke is ill and Anthony is his heir, they had a bad falling out eight years earlier and have not seen each other since. The family, under the duke’s influence, has remained in the country in all these years (something I found unlikely) while Anthony has lived in London, establishing a reputation as a rake.

To Rowling’s protestation that “you cannot marry the dullest creature you can find merely to annoy your father,” Lord Staunton replies “Why not?” He explains that has no intention of spending his life with the woman he marries. She will be pensioned off to the country. His brother will serve as an heir. The woman he chooses will only remain with him for the length of his visit to Enfield, his father’s ducal mansion. She will be a temporary wife.

After interviewing five unsuitable applicants, Staunton finds his dull mouse in Miss Charity Duncan, whose self-effacing mien is matched by her drab and brown clothing. Miss Duncan keeps her eyes downcast and her voice is soft.

Her face looked pale and ordinary in the shadows. The brown of her hair blended so totally with the brown of her bonnet that it was difficult to know where the one ended and the other began. Her garments were decent and drab. He was given the impression that they were not quite shabby but very soon would be. They were shabby-genteel.

She was perfect. His father would be incensed.

What Anthony doesn’t know is that Charity is less timid than she looks. In fact, she was dismissed from her previous position as a governess for reporting to the mother of her charges that their father molested a maid.

But Charity needs employment badly. Due to a debt her father left behind after his death, her family is impoverished. Her brother has had to find work as a clerk and she insisted that she could also seek employment to help support their younger siblings. Charity dreams of finding a get rich quick scheme that would actually work, but since such a thing isn’t possible, she is resigned to doing whatever she can to find another position, even if that includes keep her eyes lowered and her voice quiet.

Of course, when Anthony offers Charity five thousand pounds a year for the rest of her life if she marries him and accompanies him on his visit to Enfield for a few weeks, Charity accepts. Charity finds the dour and businesslike Anthony unlikable, but to support her family so well, she is willing to marry him. She doesn’t realize until after they marry that Anthony is not just wealthy, but also a marquess.

Anthony and Charity journey to Enfield together (Charity having told her brother that she got the position, but not what the position was). They stop to spend the night in an inn where only one room is available and there they share a bed. At first, all they intend to do is sleep, but Charity can’t fall asleep and Anthony gets the idea that sex could solve that problem. It is their wedding night after all. Charity wants to experience sex and knows she may never get another opportunity. And so, they go for it.

The sex is spectacular, but the next morning Anthony kicks himself for having suggested it. He noticed Charity’s blue eyes and lovely hair in the process and now he can’t think of her as a drab mouse any longer – and yet that is what he needs her to be when they reach Enfield. Charity, for her part, cannot believe that Anthony is just as dour and abrupt with her as he was the day before.

But once they arrive in Enfield, Charity is in for worse shocks. The house is palatial and imposing. The housekeeper takes in Charity’s clothing and mistakes her for a servant. But worst of all, the family members are toplofty and cold. Charity immediately senses undercurrents of anger and resentment in the way they treat her husband, and being a kind-hearted meddler, she decides to try and heal this breach.

But can there be mutual forgiveness between Anthony and his siblings? Will Anthony make peace with his ill father before the duke dies? And will he realize what a gem he has in his wife before their temporary marriage comes to an end?

I enjoyed The Temporary Wife immensely though for me at least, this is a book that reflects fantasy at least as much as reality. The premise of a duke’s heir advertising for a wife is quite far-fetched. This was probably the biggest hump I had to get over in the book, but it was not the only one. Still, I can usually go with the flow if something unbelievable is presented from the beginning as the premise of a story.

Doing so wasn’t easy in this case, but after I got over it, I found a thoroughly rewarding emotional journey for the main characters. Charity, although courageous to begin with, comes into a family alienated from its eldest son. Not only does she have to close that rift, she first has to get to know them despite their standoffish exteriors. In the process she discovers that the man she married does have a heart, and that he was badly hurt when the falling out took place. She also, very gradually, falls in love with Anthony.

As for Anthony, while he is a less overtly sympathetic character than Charity, he is fascinating. His expression is often described as “shuttered” and his is the journey of a closed man gradually opening up. He doesn’t believe he needs love, but of course he does need it, and he very gradually allows himself to be convinced of this. His love for Charity also grows in slow steps but once he falls for her, he is head over heels in love, which is all the more satisfying since he began the book pretending (and even convincing himself of) complete indifference to love.

As readers of this review may be able to tell from the above two paragraphs, the growth of the romantic relationship is thoroughly blended with the family’s healing, to a point where it is hard to separate the two. I think the first time I read the book, I wasn’t expecting this and therefore felt it took something away from the romance, but this time I loved this aspect of the book.

Besides the premise, a couple of other things also struck me as difficult to buy. I thought Charity’s boldness in calling the duke “father” rather than “your grace” and interfering in the affairs of such a forbidding and high-in-the-instep family was unlikely given that she came from such a different background, but I was able to suspend disbelief because courage and meddling were presented as integral aspects of her personality.

The other instance involves a spoiler:

Late in the book, Anthony’s father suffers a heart attack that comes shortly after Charity forced a confrontation between him and Anthony. The confrontation went badly, and Charity later blames herself for having precipitated the heart attack. Anthony assures her that his father had a weak heart and therefore she was not at fault, and although I thought this may have been inserted to reassure readers on that score, I was left somewhat skeptical toward Anthony’s statement.

Finally, one of the biggest pleasures of this book is the writing, which is sharply observant and true to the characters. In this regard, as well as in the transformation of Anthony and his family from joylessness to joy, I feel that this book is one of your strongest. Despite its imperfections, The Temporary Wife is now among my favorites of your books. B+/A-.