REVIEW: A Duke in Shining Armor by Loretta Chase

Recently, Jayne and Kaetrin reviewed your latest historical romance, A Duke in Shining Armor. Both liked it and gave it a B+ and a B, respectively. For me, the book was less satisfying. 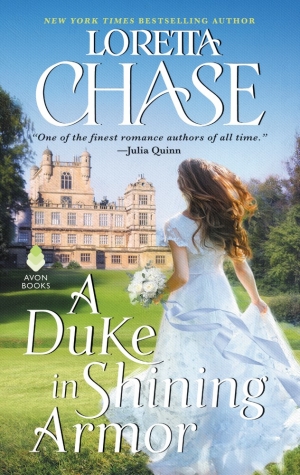 A Duke in Shining Armor begins on the day of a wedding—the Duke of Ashmont’s wedding. Ripley, another duke, is just back from a tour abroad when he runs into a drunken, stumbling Ashmont. The latter reveals that he is to marry Lady Olympia Hightower later that morning. Ripley agrees to make sure that despite Ashmont’s state, the wedding will go off without a hitch.

Ripley and Ashmont, along with the Duke of Blackwood, Ripley’s brother-in-law, form a trio known in society as “their dis-Graces” for years of misbehavior. All three are childhood friends, young, handsome, and not entirely mature. Lately, though, Ripley has done some growing, and he doesn’t think it’s beyond his powers to fulfill Ashmont’s request. Little does he know that one person will make it very difficult for him—the bride.

Shortly before the wedding, Lady Olympia drinks tea laced with brandy to calm her nerves. Then she helps herself to her brother’s brandy flask. But neither of these is enough to allay her fears—that Ashmont, although he offers the wealth her family badly needs, will take her for granted and be unfaithful to her.

Feeling trapped, the drunken Olympia escapes out the window. When Ripley goes to see what is causing her delay, he is just in time to hurry after and catch up to her. But Olympia cannot be talked into turning back, so to keep her safe, Ripley accompanies her on her journey to the home of her aunt.

Ripley has a history of playing practical jokes (a past invitation to stutterers made me recoil), and he hopes desperately that this will be seen as but one more of them. Once Olympia is conveyed to her aunt’s before nightfall, and Ashmont, with a little help from Ripley, pursues her and woos her back to the altar, Olympia’s good reputation will be restored, or so Ripley tells himself.

Olympia, meanwhile, has no desire to marry Ashmont, to whom she is not attracted as she is to Ripley. But her family’s need for the funds the marriage can provide prevents her from simply calling it off with him.

Olympia is a bookish, bespectacled girl, one who has devised a system for categorizing the books in her father’s personal library. She was voted “Most Boring Girl of the Season” (this read as weirdly anachronistic in an otherwise well-researched book), so she doesn’t expect Ripley to be drawn to her, but he is. So much so that he is eventually faced with having to choose between her and his friendship with Ashmont.

A Duke of Shining Armor begins slowly. Olympia’s initial drunkenness, the dismal, rainy day, and Ripley’s concern for the abandoned Ashmont made the first quarter feel gloomy. Even after Olympia regained her wherewithal and her interactions with Ripley became more lively, I still had issues.

Two of the biggest had to do with repetition and pacing. The phrase “He was a man,” appeared almost often enough to comprise a drumbeat, coupled with the notion that a man can’t help himself.

He was a man. Exceptional bottom, was his first thought.

He recalled the way her body felt pressed to his, and the way she felt in his arms when he’d carried her up to the inn. Of course he remembered. He was a man, and she was a shapely young woman.

Well, he was a man, and when a woman touched a man, he was likely to get excited, whether he needed to or not.

Ripley’s heart beat faster, and it was no good trying to stop what was happening inside him. He was a man, and a woman had her naked hands on his naked skin. A woman was touching him, undressing him.

Ripley was a man. This meant that, even while he was trying to decide what could be done about Ashmont, he was thinking in greater detail about the process of undoing ribbons and letting the soft, thick, brown hair fall about her shoulders, and undoing the rest of the ensemble, bit by bit.

Repetition is an effective technique in humor, but here the gender essentialist nature of these statements made it sail past funny and into irritating. Reading this novel as the #metoo movement is taking off might have had something to do with my reaction as well.

A second problem was that no additional idea for what comprised the basis of Ripley and Olympia’s relationship was introduced with equal strength and emphasis. Ripley did give some thought to Olympia’s librarianship, and in one exceptional scene involving the acquisition of a dog, we saw him admire her for concrete reasons. But more such moments were needed to provide a counterbalance for the “He was a man” excuse, and to provide reasons for why he ultimately found it impossible to let Olympia go.

I wanted to understand why Ripley needed Olympia in his life. If the attraction was based mostly in involuntary lust on his part, there merely because he was male and she was female and shapely, then it doesn’t fully explain why he would choose Olympia specifically, when she was his best friend’s bride. I did feel that there were admiration and longing somewhere in there, but for almost two-thirds of the book, they were buried too deep.

I did not have this same issue with Olympia; it was clear that she preferred Ripley to Ashmont, but was held back from breaking up with the latter because of her family’s insolvency.

Olympia took a bit too long to be decisive with Ashmont, though, and Ashmont, likewise, took too long to confront Olympia face-to-face. A near miss between them was a touch unlikely, but I was willing to go with it, at least until Ashmont bypassed another opportunity to make his case to her later in the book, sending an emissary in his place. That was when it started feeling contrived.

Additionally, Ripley’s reluctance, Olympia’s indecisiveness, and Ashmont’s inability to make his case to Olympia led to uneven pacing, so that the book dragged in multiple places.

There were, nonetheless, pleasures to be found in this novel, such as the witty dialogue with its great comedic timing:

“Now I understand where the pranks come from,” she said.

“Yours is a lively imagination.”

“It must be all the Shakespeare plays,” he said. “Yet here I am, killing books by the thousands, and you remain strangely unmoved.”

“And to a point,” he said. “Then something gives way and you run amok. Fascinating.”

Had something given way? She had run amok. That much was indisputable. As to the rest . . .

“No one has ever called me that before,” she said.

I also enjoyed some of the beautiful, emotional writing in the love scenes, such as this:

They were like two armies fighting for territory. But the fight was somehow the opposite of a fight. Whatever it was, it had to be done. She needed her hands on his skin and his on hers. She needed kisses, more of them, taken and given. And while she took as much as she could, she felt a loss of things that covered her—her clothes, yes, but something more. For years and years, she’d hidden her dreams and wants, and bit by bit, other parts of herself.

Despite their flaws, both Ripley and Olympia were appealing, and I especially liked the secondary characters of Ripley’s Aunt Julia and Ashmont’s uncle, Lord Frederick, whose failure to connect decades before mirrored the possibility that Ripley, too, could ignore his feelings for Olympia until it was too late. In many ways Julia and Frederick were more compelling characters than Ripley and Olympia, and I hope that we will see more of them in the two upcoming books.

As for A Duke in Shining Armor, it felt at times as though there was a terrific book submerged within it, with only parts of that book showing through. Still, I enjoyed those parts enough to give the novel a C+.