REVIEW: Unbreak Me by Michelle Hazen 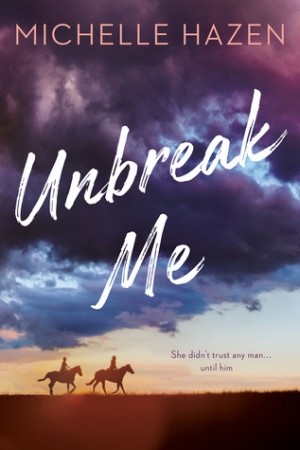 I was attracted to Unbreak Me because it promised to be angsty and it was; but I wonder if my relationship with angsty reads is cooling.  Because my reaction to this book wasn’t what I expected.

LJ Delisle is a New Orleans man of Haitian heritage. He and his mother lived through Hurricane Katrina and, like much of that community, still bear the scars from it. He is also a passionate horseman but he has what is described as an unusual approach to training. His uncle, who has a horse ranch outside NOLA doesn’t approve of this approach and so, LJ needs to move farther afield to train horses the way he wants to.

Which brings him to Montana and Cassandra (“Andra”) Lawlor and her family’s quarter horse ranch.

Andra and LJ do not have an auspicious first meeting. Not expecting to see him at all and surprised by the 6′ 5″ muscular Black stranger, she has an immediate panic attack. Her father, takes an instant dislike to LJ mainly as a result of this, although the colour of LJ’s skin doesn’t help.  The community where the Lawlor’s live is extremely white and racial ignorance is strong.

Five years earlier, Andra was kidnapped and assaulted by a guy she knew casually and who disliked being told no. She pushed herself to finish college but since graduating and returning to live at the ranch, has lived mostly as a hermit. She dislikes strangers (of any colour) and strange men in particular. Her father thinks it’s a mistake for her to hire on a male horse trainer they don’t know for that reason. But Andra wants to break out of her cage and this is a first step.

LJ is a natural caretaker and he is attracted to Andra as a person but also her vulnerability. He dislikes her isolation and the way the other staff of the ranch tend to clam up when she is around and decides to befriend her. His opening salvo is a lemon velvet cake. After noticing that Andra lives mostly on frozen ready meals, he decides to teach her how to cook and he and Andra slowly build their friendship around food.

Andra also sees just how good LJ is with the horses and how responsive they are to him. The horses’ trust of him goes a long way to helping her feel comfortable.

The story begins in Montana but moves later on to New Orleans where Andra has a taste of being the fish out of water. One of the push/pulls of the book was that LJ wanted to work with horses and loved Andra – and that means Montana – but he also misses his mother and his home and community and that means NOLA. Having both seems impossible. There were times in the story this dichotomy confused me (sometimes it seemed like nothing was going to make LJ happy and it felt very “glass half empty”) but it does come out all right in the end.

Between the trauma of Andra’s abduction and sexual assault and LJ’s remembered trauma from Hurricane Katrina, the economic differences between the main characters, as well as the racism LJ has to deal with – in Montana, in NOLA, from strangers, from the police, sometimes even from Andra herself, there is plenty of angst in Unbreak Me. I’m certainly no expert in any of these things but it seemed to me that the story verged uncomfortably on the edge of torture porn and sometimes was on the wrong side of it. It’s the difference between something being designed to provoke a reaction in the reader and a reaction following as a organic result of the events described in the story. I expect others will take a completely different view however. How I experienced the book was very likely one of those “in the eye of the beholder” things. Still, I felt manipulated from time to time. There was just too much.

That said, the Author’s Note at the back references real events which occurred in the wake of Hurricane Katrina so it’s not like they didn’t actually happen. In this book however,  the cumulative effect of all the various trauma felt a heavy-handed.

Similarly, Andra’s trauma was often a convenient plot point and I was unconvinced by the sudden and fairly miraculous recovery she made. I don’t think trauma can be cured by sex, even if it is spectacular.

LJ frustrated me from time to time about this because he took it very personally when Andra had a bad reaction to intimacy. Even though she explained it wasn’t about LJ at all, he struggled to accept it. It had the effect of making things about him and not her which was not cool. I’m no expert but it seems to me that even someone who has made a significant recovery may every now and then have bad moments or days and they’re not anyone’s fault, they just have to be got through.

While many of the points about racism were, on their face, well made I admit to a feeling of discomfort that they were made by a white author speaking on behalf of a Black man. I’m just not sure that white authors can tackle such subjects authentically.

I’m Australian and I don’t know what I don’t know when it comes to US history, the history of chattel slavery and the history of Haiti but I asked around and found out that the representation of Saint-Domingue and Haiti and Creoles was inaccurate in this book. It’s been explained to me that Creoles came from slave populations brought to places such as Louisiana and Haitians are very proud of the fact that theirs was the first Black independent nation in the world. So when LJ identified as Haitian-Creole that can’t be right.

LJ is also presented a lot of the time in a very “aw shucks ma’am” manner which felt like a caricature at times and those things all combined to make me uncomfortable with the representation. I’ll be very interested to read reviews from Black readers who are more familiar with the relevant history because I feel like they will have more to say on the topic and will certainly be more authoritative than I am.

One other thing: there is a description of Lupus in the book which felt problematic.

“Lupus.” He shoved a knuckle across his lower lip. “It’s an autoimmune thing. Like AIDS, but backward, because your body attacks everything: germs, its own self.”

LJ’s mother has Lupus and he is explaining it to Andra. I think I understand the intention here. AIDS is a disease where the immune system fails and Lupus is a disease where the immune system attacks everything. But Lupus doesn’t have the cultural stigma or historical association with minorities in the same way that AIDS does. Taken on its own I may have mostly given it a pass as poorly expressed but when combined with some other things in the book, it felt particularly clumsy.

There were good things. Turns of phrase which painted a picture that felt powerful or particularly apt.

…as much as it grated on him, he didn’t argue with her assessment of herself. He just let her talk.

“After the attack, there was the trial. I went back to college, because I wasn’t about to let that jerk chase me away.” She looked away, moving his salt shaker so it was lined up next to the pepper. “Everybody knew what had happened.”

He was all the wrong sizes. His throat too small to breathe through, his shoulders too big to stay still. His hands clamped uselessly together, dangling between his knees. He ignored all the jigsaw pieces of himself and listened.

Andra’s face usually stayed as smooth and beautiful as any marble-hewed Michelangelo. She did all her talking with her back. Iron stiff, or easy and supple, going with the flow the way she did when riding one of her beloved horses.

I was uncomfortable about the way Andra’s sexual trauma was represented. I wasn’t convinced her “recovery” from panic attacks was an accurate depiction and I had a fairly visceral reaction to this:

But there was no part of him that didn’t love her, and that made fear impossible.

For all that the book was full of angst and drama, I still spent a reasonable portion of the novel feeling bored. It took me over a week to read; when I am happy to watch TV or play Words with Friends rather than read, that’s a sign I’m not really that into it.

The book is fairly highly rated at Goodreads already so perhaps I’m an outlier. It could be that angst-filled books just don’t work that well for me anymore. Or it could be that it was this particular book. In any event, it wasn’t a very successful read for me.