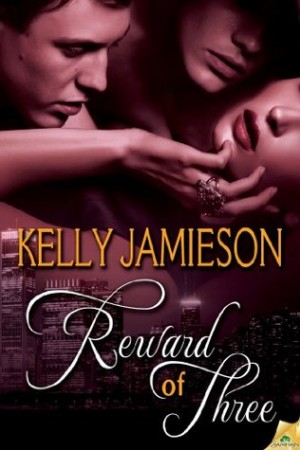 There’s just no way I can talk about this novella without giving away things which might be regarded as spoilers.  So, be ye warned all who read what follows.

I admit to a weakness for m/m/f menage stories and I think Rule of Three was among the best I’ve read in that niche.  Reward of Three takes up the story three years after the events of Rhythm of Three and begins when Kassidy announces her pregnancy to Dag and Chris.  They had talked about the challenges of raising a child in a poly relationship but had talked to other poly families and decided it’s what they wanted to do.  They had also decided that both Dag and Chris would be the dads, regardless of biology.

The beginning of the story felt a bit sparse and I would have liked to have seen some of the discussions about living in a menage and raising children rather than just being told about them.

But then, something happened and it distanced me so much from the story that it was difficult to read the rest and hard to remain engaged at all.  This is the potentially spoilery bit y’all. I think the blurb broadly hints at what happens and oh how I wish I had read it more carefully because if I had, I would not have requested this book for review.  Kassidy has a miscarriage and the bulk of the rest of the book takes place in the week following as the trio grieve individually and decide whether they can weather the storm together or whether this will break them.

I do have difficulty reading about pregnancy loss.  It’s a personal hot button – without going into too much detail, I think it’s easy to guess why. I either have a very strong emotional reaction and lose my shit completely or I withdraw emotionally from the story so as not to lose my shit.  The latter happened to me here.  I’m not sure that has anything much to do with the way the book was written but it did inform my experience of it.  That being the case, my grade probably needs to be taken with a grain of salt.

I wouldn’t want to suggest that each person who experiences pregnancy loss feels the exact same way.  Of course they don’t. For an unwanted pregnancy, I imagine a miscarriage could even be a relief.  People grieve in different ways and none of those ways are wrong. That said, I found it insulting in the extreme for Dag and Chris to be getting it on the day after Kassidy loses their baby (she’s sleeping in a different room because she wants space).  I get that lovemaking can be a way to feel alive and connected after a loss.  But still.   (Remember, I was pretty shut down when I was reading and I still was pretty flabbergasted by this).

There were aspects of Kassidy’s reaction which rang very true (even as I was reading with my eyes half closed because I didn’t want to know) and I expect that other readers will feel quite moved by her grief.  The book is only about 100 pages and most of it covers about a week. One week is just the tip of the iceberg for someone who suffers a miscarriage of a much wanted baby (as was the case with Kassidy).  I found it extremely difficult to believe and/or accept that Kassidy would be up for vigorous sex with both men ONE WEEK after a miscarriage.  She was 10 weeks pregnant so it’s not like she had a heavy period.  She would likely still have been bleeding.  Now, some people don’t mind having sex when there’s blood but a) it wasn’t mentioned and b) that kind of blood has a different emotional qualilty to me and I just could not and did not want to go there.

There is a happy ending for the trio as they work through their various griefs.  While I don’t think the novella suggests that they’re all fine and dandy after a week (which I appreciated) I did nevertheless get the impression that the worst was over. Um, no.

There is also a happy epilogue one year after and I think readers can guess what happens there.  For me, that was almost harder to read.

So, I’m probably the wrong person to review the book and really, I wish I hadn’t read it.  I think it had too much sex for the content and tone and I found the juxtaposition jarring.  The first book was a little gem but this was a disappointment on a number of levels, some of which had nothing to do with the story really.   I’m not sure what use this review is to anyone and the grade is probably pretty rubbery all things considered. But, for what it’s worth, I give Reward of Three a C-.

→ Kaetrin
Previous article: The “C” in ARC Does Not Stand for “Contract”
Next Post: Wednesday News: Amazon scores a point against Hachette, the Pentagon is watching us, Torstar shareholders okay Harlequin sale, and re-visioning the ‘bodice ripper’