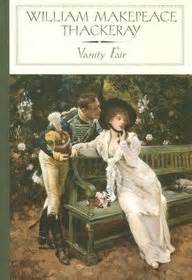 I will preface this review by stating that Vanity Fair is not a romance, nor is it remotely romantic. For those who are unfamiliar with Thackeray’s classic novel, it is subtitled “A Novel without a Hero”, and satirizes English society circa 1815. It may be of interest to those of us who cut our teeth on Regency-era romances; Vanity Fair presents a somewhat jaundiced view of the British upper classes of the time.

Becky Sharp completes her studies at Miss Pinkerton’s Academy, studies that were subsidized first by her artist father’s teaching at the school and later, after he dies, by her own teaching of French to the pupils. She leaves the school to stay with her good friend Amelia Sedley, who finishes matriculating at the same time. Becky needs to go into service and she has a position secured, but first she will spend some time with Amelia in the comfortably prosperous atmosphere of the Sedley household.

There, Becky meets Jos Sedley, Amelia’s brother, who is visiting, having made his fortune in India. Jos is fat and shy, especially around women, but also vain and given to cultivating and believing ridiculous puffery about himself and his exploits (after Waterloo he seemingly believes he was a vital part of the British victory, in spite of the fact that he spent the entire battle in town, desperately trying to flee to safer environs).

Becky sets her sights on Jos, believing he will offer for her and save her from a life of drudgery. But she’s not able to reel him in before being forced to depart for Queen’s Crawley to work as a governess for Sir Pitt Crawley, a baronet who is a nobleman in name only. Sir Pitt is crude and Queen’s Crawley is dirty and depressing, but Becky manages to do what she does best – charm and ingratiate herself with anyone who is capable of being charmed and willing to be ingratiated. She quickly has Sir Pitt eating out of her hand, and when she meets Sir Pitt’s wealthy relative Miss Crawley, Becky becomes fast friends with the old lady. The entire Crawley family fawns over Miss Crawley in hopes of gaining her inheritance, though Rawdon Crawley, Sir Pitt’s younger son, has long been her favorite and presumptive heir.

Positions in the Crawley family are thrown into disarray, however, after Sir Pitt Crawley’s mousy wife dies. This prompts Sir Pitt to propose marriage to Becky, only to find that she cannot marry him, as she is already secretly married to his son Rawdon. The secret and, some would say, unsuitable marriage (Becky’s mother was an opera dancer, after all) infuriates the entire Crawley family, none more than Miss Crawley. Rawdon was her favorite and she adored Becky for her ability to amuse (usually by cruel mockery of others – Becky knows how to tailor her talents to her audience), but Miss Crawley is at heart a snob and feels betrayed by both parties after the elopement. Rawdon is promptly cut off by his father and dropped from Miss Crawley’s will; all of Becky and Rawdon’s attempts to reingratiate themselves with Miss Crawley fail (in no small part to the machinations of other family members who are scheming to get their hands on the money, as well).

Becky reunites with her friend Amelia after marriage; Amelia has  married under somewhat similar circumstances. Amelia had long been betrothed to George Osborne, son of her father’s business partner. But when Mr. Sedley undergoes a disastrous financial reversal, his old friend Osborne immediately turns on him and orders George to drop Amelia. George only demurs due to the very strong influence of his friend and fellow Army officer, William Dobbin. Dobbin is in love with Amelia himself, so in love that he selflessly wants her to have everything she wants, and she wants George. So George and Amelia are married, and like Becky and Rawdon are cut off financially. But it’s time for the men to head to Belgium to face Napoleon, so at least they don’t have to worry about trying to live in London with no incomes for the time being. Becky and Amelia accompany their husbands to Brussels.

The meaning of “A Novel without a Hero” isn’t hard to parse. The characters in “Vanity Fair” are all deeply flawed. At first glance it seems like the “best” characters in a conventional sense are Amelia and Dobbin, who demonstrate the selflessness and humility so integral to heroes and heroines in 19th century English novels. But Amelia is a total twit, devoted to George beyond reason and given to crying at the drop of a hat (Thackeray makes fun of her constant waterworks, which I appreciated; late in the book he refers to her as “our simpleton”, which I just loved). Dobbin is a tad more sympathetic, but he’s not exactly a relatable character, spending years pining after someone who is unworthy of his affection and lacking any sort of charm or sense of humor to lighten his character.

George Osborne is an idiot and a jerk, completely unworthy of Amelia’s devotion. His father is even worse; he justifies his horrible treatment of Mr. Sedley by acting even more horrible, renounces his only son for marrying against his wishes, and only relents partly years after George is killed at Waterloo by taking in Amelia and George’s child (thus taking the beloved child away from Amelia, who selflessly gives him up – gag – so he can have a better life). Oh, the kid is kind of a brat, too.

The Crawleys are also mostly awful, from the odious Sir Pitt to his namesake eldest son, whose pomposity and piety are as tiresome as his sire’s debauchery. Actually, Pitt Jr.’s eventual wife, Jane, is probably a fair candidate for least obnoxious character – she’s a good person without being a martyr about it. Rawdon Crawley is rather unprincipled and something of a happy idiot (at least Becky treats him so, after they marry), but he is redeemed somewhat by his love for their son, also called Rawdon.

Then there’s Becky. What to say about Becky? I really liked her for much of the novel; she fit the anti-heroine mold well. She is someone who clearly grew up via the school of hard knocks, and she’s learned to take care of herself, with a vengeance. She manipulates people, yes, but it helps that most of the people she manipulates are not that sympathetic themselves. I liked this description of her, mid-novel:

“When attacked sometimes, Becky had a knack of adopting a demure ingenue air, under which she was most dangerous. She said the wickedest things with the most simple unaffected air when in this mood, and would take care artlessly to apologize for her blunders, so that all the world should know that she had made them.”

At a certain point, though, Thackeray takes Becky too far, and I’m not sure how I feel about it. The first issue is her disdain for her child. I could accept benign indifference (punctuated by bouts of using him when it’s convenient to do so); that would be in line with the Becky the reader has come to know. But Becky seems to really take an active dislike to her son, and it becomes distasteful to read about and makes her seem a lot meaner. Previously she hadn’t been mean, exactly, except on occasion when she mocked someone. But there was usually a reason for it; Becky’s every action is calculated and chock-full of self-interest. Her hostility towards the boy has no purpose, and feels out of character.

It’s especially unpleasant contrasted with her husband’s fondness for his namesake. Rawdon Sr. is no great shakes, but at least he has some parental instinct. He actually seems to improve as a person through his love for the child.

Then there’s Becky’s treatment of Rawdon himself. For years into their marriage, she seems to be acting in both of their interests, and Rawdon seems fine with her flirting (and perhaps more than flirting) with other men if it means that they can continue to live a certain lifestyle without ever paying their bills. But Becky grows increasingly more contemptuous of her husband, and by the time she lets him languish in debtor’s prison, ignoring the pleading note he sends begging her to bring a small-ish sum that will free him, he becomes fed up with her, and so did I as the reader. I was actually sort of sorry to feel that way; I preferred her as an entertaining sort-of-villain, the type who you can never feel too bad about liking because the people she hurts are mostly those who’ve brought it on themselves. But by book’s end Becky is revealed to be thoroughly corrupted and capable of anything, even, perhaps, murder. I didn’t really like the transformation because it smacked too much of conventional morality, of a simplistic division of characters into “good” and “bad”, which clearly hasn’t been Thackeray’s thing for the majority of the book.

As much as I liked “Vanity Fair” (and I did really like it), I found myself wondering at how it had become so beloved. In 2003 it was voted the UK’s “Best Loved Novel” in a BBC poll. It struck me as strange because in some respects, it feels like a bit of a lightweight story. I’d compare Thackeray to Jane Austen, in that both write serio-comic takes on 18th century British life. Thackeray is about 1000 times more cynical and less concerned with morality than Austen, of course. But it’s mostly just an arch commentary on the times, not a big sweeping novel of deep philosophical themes like, say War and Peace. Not that there’s anything wrong with that (I liked Vanity Fair better than War and Peace!), but one wonders what makes a story that’s not after all a big, serious epic something that is remembered and loved 160+ years after it’s published?

Though that’s not a complaint. Vanity Fair is well worth reading, and I’m glad it’s famous enough that it came to my attention. My grade is a B+.

→ Jennie
Previous article: Wednesday News: Amazon scores a point against Hachette, the Pentagon is watching us, Torstar shareholders okay Harlequin sale, and re-visioning the ‘bodice ripper’
Next Post: REVIEW: I Am Zlatan: My Story On and Off the Field by Zlatan Ibrahimovic