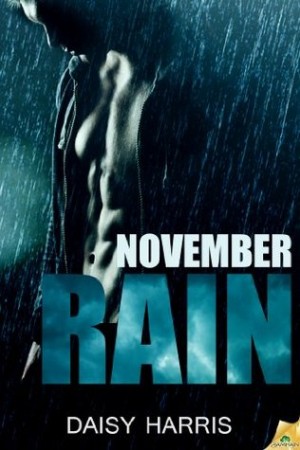 Detective Joe Klamath is used to guys falling on their backs at the arch of his commanding eyebrow. Yet he can’t seem to get a read on a cute, department-store sales guy. The vagrant who just walked in, though? He’s easy to read. He’s dangerous.

Joe’s training kicks in, but as he wrestles the gun-wielding man, he gets shot.

Raised in a conservative Ethiopian community, Elias Abraham keeps his natural attraction to men under wraps. But Joe’s heroism moves him to care for the man who saved his life. After all, Joe is hurt. Chances are slim he’ll demand the types of things boys in college always wanted. Sex acts Elias wasn’t—and possibly never will be—ready for.

Gradually, Joe’s easy confidence softens Elias’s resistance. But as Joe’s healing progresses too slowly for a man of action, and trouble brews in Elias’s family, Elias begins to wonder if he can handle the pressure. Because though he hasn’t given all of his body, he’s already given all of his heart.

I read the blurb when I first requested the book for review but had forgotten it by the time I actually read the story. I was kind of hoping at first that Joe wasn’t one of the heroes because I didn’t like him initially. I thought he was overly aggressive and a bit of a dawg.  Unfortunately, my opinion of him didn’t improve all that much over the course of the book.

Also, early on there was some name confusion and in more than one place Joe was called Jack – an error I sincerely hope was corrected before the book went on sale.

Actually, it’s under 120 pages so I should call it a novella.   And the problem with novellas is that there isn’t a lot of time or space to show a relationship develop believably to the exchange of “I love you” and a HEA.  In my opinion the best ones get around this by having the main characters already know each other or by delivering a hopeful Happy-For-Now ending rather than the whole box and dice.  Here, Joe and Elias meet, fall in love and get their HEA in less than 120 pages.  Frankly, my note when Elias first thinks (after knowing Joe for about a week and barely sharing any conversation with him) “I love you” was  oh honey, no.  Elias is soft spoken and shy.  He is presented as having a natural reticence which is largely influenced by his Ethiopian culture.  He hadn’t had a relationship before Joe – just some meaningless and embarrassed college fumblings and I thought he was far to naive and immature to truly know what he was doing when it came to Joe.

Because we get both perspectives, we know that Joe initially assumes that he and Elias will merely hook up and his sexual aggression (he wasn’t violent, just forceful and pushy) felt so much more alarming when I’d spent time in Elias’s head and knew how shy he was of physical intimacy.  Quite a lot of their foreplay is essentially crossed wires where Joe makes assumptions that Elias either doesn’t understand or doesn’t correct.

Joe had been in a 10 year relationship up until about a year before the book begins.  It appears to have been more of a convenience and a friendship rather than true love but it is clear that Joe is still hurt that things ended.  He is also hurt that his ex, Dan, is getting married so soon after their break up and Elias is the perfect arm candy for Joe to take to the wedding to save face.  Joe doesn’t come across as having much insight into himself or others, notwithstanding that he is a police officer in a Crisis Intervention Unit, partnered with a registered counsellor.  His communication skills are poor and talking about his feelings is difficult – so he mostly doesn’t do it.

I was interested in the Ethiopian cultural aspects of the story and I thought you did a good job of moving Joe from a fetishising racist at the start to someone who becomes far more culturally sensitive and aware of the racism of others (although I think he remains too accepting of it). The casual racism displayed by some of the secondary characters and bit players felt depressingly authentic.

Elias lives with his older brother Solomon and Solomon’s wife, Sara.  Sara isn’t coping well in America, having immigrated from Ethiopia via an arranged marriage.  She particularly dislikes the winter and is quite depressed.  Solomon struggles to understand his wife and provide support to her, and Elias is reluctant to intervene in his brother’s marriage.  Even though Solomon and Elias were raised in the US, their cultural identity is very much Ethiopian.  Arranged marriages are very common (apparently) and overt displays of affection are rare. Being gay, for an Ethiopian male is even more fraught. Elias knows that his parents (who have returned to Ethiopia) will disown him if he comes out and he is terrified that he will lose Solomon and Sara (his only family in the US) if he shows himself to be openly gay.

I understood the attraction for Joe in Elias – Elias is younger and prepared to do just about anything for Joe (honestly the servile nature of some of it was uncomfortable for me) – but I struggled to see what was so great for Elias about Joe.  Yes, Joe is good looking but, particularly at the beginning, he treats Elias as little more than a piece of meat.  In fact, during the course of the story, Elias does stand up for himself on occasion (something for which I was very glad) and tells Joe that he will not be treated that way.  But Joe keeps crossing Elias’ boundaries with no compunction. The best example of this comes later in the story. I have hidden it under a spoiler tag, so readers can choose to read about it or not.

When Joe is invited for Thanksgiving dinner to Solomon’s house, Elias makes it abundantly clear that there can be no physical contact and Joe must appear to be a friend only – the risk to Elias here is significant; he could lose his family and his home.  However, Joe doesn’t hesitate when he decides he wants to kiss Elias in the kitchen.  And this, after Elias specifically warned him against such conduct. I was annoyed that Joe didn’t respect Elias’ boundaries and given this occurred later in the story, I wasn’t confident he ever would.

The writing was sometimes confusing. Within one paragraph there would be an apparent shift from one character’s POV to another.

Elias sealed their mouths together like he had something to prove, but he deserved to get his nut on, to scrape Joe with his teeth. Joe deserved to get manhandled because he’d been stupid enough to let Dan’s dumbass remarks follow him home.

I felt the depiction of Joe’s injury was inconsistent. It was initially a “graze” but he needed way more time off work and therapy than that would suggest.  The PT doctor was obviously there to teach Joe how to be a better man and that felt heavy-handed.

I think I may have enjoyed this one better if there had been more time for the relationship to develop but things moved very fast and I felt Elias was steamrollered rather than seduced. While I liked Elias, he felt very young, and I didn’t really like Joe all that much.  The best parts of the book were those which dealt with the culture shock Sara suffered when she emigrated but even then, the word count meant this didn’t get enough page time either and the resolution felt pat.

Ultimately, November Rain was not a success for me.  I had initially graded the book at a D+ but on reflection, I think the multicultural aspects of the story raised it to a C-.