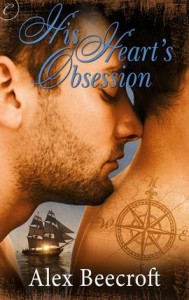 But Hal demands proof of love before he will submit to the rakish Robert.

Mission accepted. After all, how hard could it be to show what’s inside his heart? Yet Robert’s move to claim Hal’s love leads to the threat of exposure, and mortal danger from the French. Will a heart obsessed ever accept defeat?”

My goodness it’s been a while since I read one of your novels. When I saw this novella listed as an upcoming Carina release, it seemed the perfect thing to break my Beecroft drought. It’s short enough that I sailed through it – pun intended – fairly quickly yet I finished it feeling mildly annoyed with Hal and that Robert might have his work cut out for him if he wants to hear more of Hal’s laughter.

What could be worse than an unrequited love triangle? For two of the three involved to be “inverts” – dreaded sodomites – in His Majesty’s Navy in 1752 – that’s what. Hal Morgan has nursed a pure and completely unreturned love for his captain for years. The pain of it finally threatens to unman him when the Captain seeks his Lieutenant’s advice on wooing a pretty young woman. In Hal’s despair Robert sees a chance to declare himself and attempt to win the love of a man he’s longed for ever since joining the crew of the HMS Swiftsure.

Hal’s rejection of Robert’s initial advances – which is understandable since Robert has a long earned reputation as a practical joker – is expected. But Hal’s continued woe-is-me little martyr act started to grate shortly after it began and got no better as the story progressed. Were I in Robert’s place and if it would not have caused me to be exposed to the full might of the Articles of War, I would have smacked Hal with a truncheon and yelled (like Cher) “Snap out of it!” Robert truly must be in love to persevere in the face of this determined pity party.

Once Hal had finally – finally! – snapped out of it and decided that yes, he could excise his fruitless love for the Captain and after that, accept the devotion of a happy-go-lucky man who, in spite of all Hal’s sulks, never wavered, things looked up and got better but it was a long trip to the HFN in His Majesty’s Navy. C-