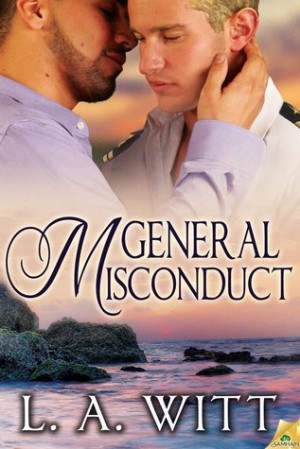 When this book came up for review, I was particularly interested in it because of the Japanese setting.  And the descriptions of Okinawa did turn out to be the highlight of the book for me.  The landscape sounds beautiful and stunning.  (This was one of those books where I wouldn’t have minded some photographs to be included in the back matter actually.)  Unfortunately, the story was kind of boring for me and I struggled to finish.  About halfway I was hemming and hawing about whether to continue reading but at that point I felt I had invested too much time so I ploughed on.  You probably won’t thank me for that.

Aiden Lange is a newly minted naval ensign, stationed in Okinawa, Japan.  He has big career plans in the navy and is looking forward to his time in Japan.  It doesn’t start off that well.  He gets beaten (and nearly raped) by a gay Marine in an alley outside a seedy bar and the military police-type person (who I gather featured in a previous book which I have not read) advises him to go hiking in Hiji falls, post some photos on Facebook and tell everyone the story of how he fell on slippery rocks and thus bruised and cut his face and hands, rather than risk damage to his career by admitting the truth.  Even though DADT is over, I gather that being gay in the military is still somewhat problematic in terms of career advancement?  Or, at least, that is how it was presented in the story.

Naturally, Aiden has to actually go to Hiji Falls in order to take the photos for his cover story but things take a turn for the better when he meets Connor Bradshaw swimming in a watering hole at the top of the climb.  Connor and Aiden are both attracted to one another – the story is told in alternating first person POV so readers get to spend time in each character’s head – but are initially a bit shy about making a move.  Connor is a civilian – the son of an officer.  He is going to college as a dependent on his dad’s GI bill and living at home is part of the deal with that.  He is 20 but he seemed very young to me even at that age. Aiden is only 22 and doesn’t feel all that much older actually.

For reasons which are never made clear, Aiden doesn’t push to know who Connor’s dad is.  The guys go to dinner and agree to meet up again to explore the island.  After a couple of days, one of them makes a move and from then on their relationship turns sexual.  As Connor is very inexperienced, they take things slowly but at the point where they start kissing, most of the getting to know you conversation flies out the window and not a lot of time is spent showing how their feelings are growing.   Instead, I was told – and this rarely works well for me. Ultimately, I didn’t understand why they were together, apart from youthful hormones and when it turns out that Aiden works directly with Connor’s dad, and the shit hits the fan, I didn’t quite understand their investment in the relationship which would lead both to take the risk of continuing to see each other.

General Bradshaw is concerned about damage to both Aiden’s and his own career due to the potential conflict of interest and the appearance of being biased due to the relationship between Connor and Aiden.  He has no issue with Connor being gay – which was a plus and I really liked this aspect of the story – but he has forbidden Connor to date any military men (which leaves a very small pool indeed, because Connor doesn’t socialise with the local community because reasons).  The general also warns Aiden that he will do damage to the ensign’s career – including arranging for remote and boring postings – if the relationship with Connor doesn’t end.

This was a bad idea. A stupid one. Just like every time Connor and I had sneaked off to a beach or a restaurant or wherever over the last couple of weeks. We’d seen each other almost every day since we’d agreed to fly below his father’s radar, and I had the same ball of nerves in my gut every single time. The same certainty that we were going to get caught, that we were idiots, that I should really just tell him this was a bad idea and go our separate ways. Just call it quits before General Bradshaw made mincemeat of my career.

Apart from getting their rocks off, I didn’t see, on the page, the reason Aiden felt Connor was worth such a risk to his career.

This wasn’t just about the sex we hadn’t had yet, or the fooling around we had done. If what we were doing was just about sex, we’d hide his car somewhere and spend every waking hour in my bed. Or these long drives would be to the resort hotels up near Nago, or the more cosmopolitan ones down in Naha.

But we didn’t hide.

Yeah, we fooled around sometimes, but we spent more time out of bed than in it. And I liked it. I liked the time we spent together, whether we were making out or going out, and that was the part that scared me. Connor may have been uneasy about taking the next step in the bedroom, but I was a nervous wreck over the places this was going that didn’t involve our bodies.

told me there was more going on than just sex but unfortunately, I didn’t see the falling in love occurring on the page and so my investment in them as a couple was pretty low.

There was also a lot of repetition in the book –

“For what it’s worth,” he said, running his hand up and down my chest and abs, “my first time was awkward as hell. And yes, it hurt.”

The sex scenes were hot enough but I admit I was bored by the story and started to skim them because they weren’t showing me the connection I wanted to see. What I saw on page, reiterated my view that these two guys were really young and not terribly mature.

It was in the second half of the book, that two things struck me – one had been burbling along in my brain for a while, but my thoughts became clear in the latter part of the story.

There were almost no Japanese people in the book.  This is despite the entire story being set on the island of Okinawa.   I gathered that the American military kept generally to themselves and perhaps the book was saying something meta about how whacked it is that this was the case, but I don’t know enough about the context to be sure of this.  Basically, the only Japanese people in the story were servants (wait staff), or shown in servile behaviour.  General Bradshaw had a Japanese (second) wife.  Her only role in the book was to show  a character into the house late in the book.  Another officer had a Japanese wife and the sum total of her lines is included in the following:

As soon as I stepped into the kitchen, Noriko turned around and held out both hands. “I take it.”

She beckoned with her outstretched hand. “I take.”

Connor had spent a lot of time on the island but had learned very little Japanese.  He didn’t hang with the locals and had no Japanese friends. There were NO Japanese characters in the story of any consequence at all.  In a book set in Japan.

Aiden wanted to explore the beauty of the Japanese landscape but he didn’t appear to be interested in getting to know much about Japanese culture and customs.  He didn’t appear interested in meeting any locals. Neither did Connor, who had been there for years already.  The juxtaposition of the lovingly described natural beauty and the almost complete erasure of the people was baffling and disturbing.

Which brings me to my second bone.  Where were the women?  The most “significant” woman in the story (who was mentioned but had no actual page time) was Connor’s mother who was not only an alcoholic but also an abusive homophobe.  Ding Ding!!  I counted six women in total (the two wives, a waitress, a grandmotherly neighbour who was barely mentioned, an officer by the name of Gonzales who briefly appeared and Connor’s evil mother). There were no female characters of any depth or substance whatsoever. Gonzales at least was an officer and had a couple of lines which weren’t about taking dinner orders or removing dirty dishes but when that’s the best one can say about a female character in a novel, the barrel is scraped pretty clean.

If I had been more engaged by the story I may not have noticed (or at least, not as much) the absence of Japanese people and women but as it was, I was bored and not very invested in Aiden and Connor getting their HEA and those two things stood out to me as if they were surrounded by neon lights. For those reasons, my grade for General Misconduct is somewhere between a C- and a D. I have read and enjoyed other books by you and I’m sure I will again, but unfortunately, this one was not for me.