When I saw this book available online, I snapped it up without a second thought. I am a huge fan of The Bronze Horseman and its two sequels, and I also enjoyed The Girl in Times Square. I’ve avoided some of your other, earlier books because online reviews have indicated that they are different in tone and style and perhaps a bit downbeat. But Children of Liberty sounded like a vibrant historical novel with a love story at its center, so I was hopeful that it would be somewhat similar to The Bronze Horseman. 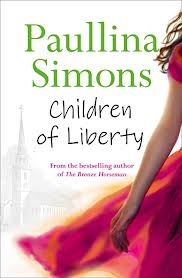 As it turns out, this book is actually a prequel to The Bronze Horseman trilogy. For some reason it took me a while to figure that out – the mention of a character’s last name, “Barrington”, niggled at my memory but not enough to really turn the light bulb on. But when I did figure out that the Harry and Gina (later called Jane) of this book are Alexander’s parents from The Bronze Horseman, I was dismayed.

Why? I guess I should spoiler-mark this for anyone who hasn’t read the earlier books and thinks they might someday:

[spoiler]Readers of The Bronze Horseman know that Alexander’s parents died in the Soviet Union, killed by the regime they had once idealistically idolized. Furthermore, in my hazy recollection, Alexander’s memories of his childhood featured a kind but weak father and a bitter, alcoholic mother.

I’m not, as romance readers go, an absolutist on HEAs. I can accept a sad ending, when it’s appropriate to the story. (See: The Time Traveler’s Wife. Sniff.) But this is just depressing. I don’t want to read a whole book about two people who are going to get to know each other, fall in love, and then wreck everything with their bad decisions and personal foibles.[/spoiler]

Gina Attaviano arrives in America at Boston Harbor in 1899, along with her mother and older brother Salvo. They have emigrated from Naples, an emigration that was long the dream of Gina’s father, who died before they could leave Italy. Immediately upon arrival, the Attaviano family encounter Harry Barrington and Ben Shaw, who troll the docks hoping to set arriving families up in apartments owned by Harry’s father (this set up seemed kind of unsavory and potentially exploitative to me but it is never suggested that Harry’s father is any sort of a slumlord, so I guess it’s okay). The Attavianos are bound for Lawrence, Massachusetts to stay with family, but Ben, who has taken a shine to Gina, lobbies hard to change their minds, and when that fails, insists that he and Harry (who’d rather just move on to another arriving family) accompany the Attavianos and their worldly goods to Lawrence to see them settled.

Ben persists in his moony-eyed attraction to Gina even when he finds out she’s only 14 years old (he and Harry are both 20) and in spite of Gina’s mother and particularly her brother’s protective attitudes. Gina, however, only has eyes for Harry, for reasons that weren’t especially clear to me.

Ben and Harry are Harvard students and lifelong friends. Ben has been pretty much raised by his aunt Josephine after his free-spirited mother found she couldn’t really take care of him and live life the way she wanted to. Harry lives in the family manse with his father and sister and suffers under the weight of his father’s heavy expectations for him. It is expected that Harry will join the family business upon graduation, though Harry’s interests lie in literature and, later, political thought. Ben is obsessed with the Panama Canal (in the planning stages in  1899). The Panama Canal business is oddly shoehorned into the story and at times reads like a lot of historical info-dumping. In general, Ben is kind of an odd character; he’s absent for a lot of it but his supposed love for Gina lingers over the story. It feels almost like parts of Ben’s story were edited out or perhaps like he’ll come up as a more significant character in future books (assuming there are future books, which seems like it will be the case). But he could have been removed from the story entirely without altering it significantly.

Anyway, Ben loves Gina (though he hardly knows her), Gina loves Harry (ditto, but at least she has her tender age as an excuse), Harry is indifferent (and has long been practically engaged to his father’s business partner’s daughter). Gina chases Harry by enlisting his help in getting her brother Salvo a business loan so that he can open a restaurant. Harry and Gina become friends of a sort while the restaurant is coming together, but when he realizes that he is actually sort of attracted to her (Gina has turned fifteen at this point), he abruptly breaks off contact and they don’t see each other for five years.

Cut to five years later: Gina is a politically active college student who now goes by the name Jane. Gina/Jane’s transformation from moony teenager to political firebrand and Emma Goldman enthusiast is unconvincing. When Harry encounters her again, he wonders “When did she get so fiery?” which only highlighted for me the change in her character. Sure, people change, and teenagers mature – but it would have been more plausible and interesting if there was some sort of reason given for her political awakening.

I also just wondered at this juncture in the story – what was the point of first half of the book? It’s a lot of pages in which not too much happens; the characters are introduced and their situations established, but I was left wondering if the story could have just started with the “five years later” part and introduce Harry to Jane then. A lot of the early plot goes nowhere. For instance, Salvo briefly works for and flirts with Harry’s soon-to-be-fiancee, and quits after offending her, but it never comes up again (in fact, Salvo disappears in the second half of the book).

Simons’ writing style has always been unique; I’ve wondered if it’s partly a result of learning English as a second language. It’s not a style that works that well for me, oftentimes; in fact, it’s a tribute to just how much I love the Simons books that I do love that I’m able to put aside my issues with her prose, since prose is generally a pretty important factor to me when I’m reading. In Children of Liberty the writing quirks were more noticeable and aggravating, since I wasn’t caught up in the characters and plot so much. Some examples:

“To say she looked unreservedly pleased would be to under-define her expression.”

“He didn’t want to unpack the reasons why.”

The modern usage of the already annoying phrase “unpack” stood out glaringly for me.

“He smiled rotundly, patting his daughter’s back.”

And really, there are many more examples I could give.

The biggest problem I had with Children of Liberty, though, is the character of Harry. He starts out as not particularly likable but not really objectionable, either, but by the end of the book he is entirely contemptible. I mean, just a total asshole. First of all, in five years he hasn’t matured in any appreciable way; he’s still engaged (though at least a wedding date is set) and living off of his father; he’s working on his dissertation and seems to have been for a while. He’s also teaching at Harvard but is alternately clueless and rather childishly sullen about the fact that his students don’t like him (he’s too hard a grader and doesn’t connect with them).

He’s sexist: At one point, Harry muses to himself about Jane’s interest in anarchists; “For some reason, women found all that talk of liberty appealing.” He also seems offended that Emma Goldman speaks about free love given that she’s “homely.” He is jealous of Jane’s friendship with a classmate named Archer; at one point Harry, bringing Jane flowers, finds her accompanied by Archer and is so angry that he flings the flowers at her feet and stalks off. I am guessing that this is supposed to show the intensity of Harry’s feelings for Jane, but really, it just makes him seem like a big baby. Furthermore, his indignation is ridiculous given that he has a fiancée. In the end he makes a choice but it’s done in the most cowardly and passive way possible, making the choice (and Harry himself) impossible to respect.

Gina/Jane is a Tatiana-like character in some ways – she has a similar childlike enthusiasm and naif appeal. But she lacks Tatiana’s essential charm and the Mary-Sue-martyr tendencies that made Tatiana weirdly compelling as a heroine.

What it comes down to for me is that without the compelling characters and plotline that characterized the previous Simons books I enjoyed, this is simply a book with many more flaws than virtues. My grade, regretfully, is a C-.