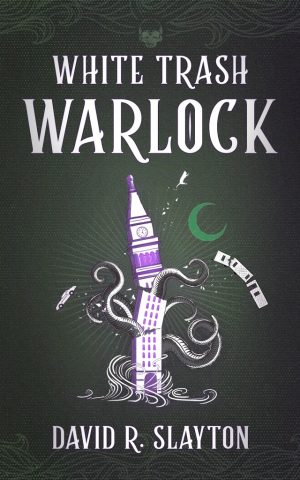 Guthrie was a good place to be from, but it wasn’t a great place to live, not when you were like Adam, in all the ways Adam was like Adam.

Adam Binder hasn’t spoken to his brother in years, not since Bobby had him committed to a psych ward for hearing voices. When a murderous spirit possesses Bobby’s wife and disrupts the perfect life he’s built away from Oklahoma, he’s forced to ask for his little brother’s help. Adam is happy to escape the trailer park and get the chance to say I told you so, but he arrives in Denver to find the local magicians dead.

It isn’t long before Adam is the spirit’s next target. To survive the confrontation, he’ll have to risk bargaining with powers he’d rather avoid, including his first love, the elf who broke his heart.

The Binder brothers don’t realize that they’re unwitting pawns in a game played by immortals. Death herself wants the spirit’s head, and she’s willing to destroy their family to reap it.

A good friend mentioned this book to me as something potentially interesting that was coming out soon. My friend’s and my tastes always aligned very closely. Also I have seen and read so *few* books with gay romantic element in it lately that I one clicked right away.

I am so very pleased that I did. This looks like a start of the series, something that I expect almost every time I pick up a new book for the last couple of years, but encouragingly enough after I finished I was actually looking forward to learning more about this world and about the characters. When I finished this book, instead of thinking oh no, it would be endlessly stretched for god knows how many books to come, I thought – yes, more fun books are coming.

Adam was a very sympathetic character to me from the beginning of the book. He is a witch who is struggling to get by and who lives with his aunt. He is estranged from his mother and brother and he has a very good reason to think they treated him badly when he was younger. Committing somebody to the asylum when somebody does not need to be there can make person think such thoughts.

Adam has a very modest opinion of his magical powers and *in this book* it looks like he is right about that (although having read many series with the magical main character thinking the same about himself or herself and increasingly growing more powerful with every book, it makes me wonder). He knows that in his world, in the world where he can get to while spirit walking, there are many magical entities way more powerful than him and in order to achieve some things he would need help from those entities.

When his estranged brother contacts him and asks for help from the evil that targeted their family, Adam hesitates a little bit but really not much, because the person who needed help the most never hurt Adam in the past and he did not feel that he could ignore his brother’s desperate plea either.

Adam is going to Denver where the bulk of the action will take place and where more magic and magical beings will appear on the pages of the story. I liked that the author sketched the portrayal of magic and how it interacted with the “normal” world of the book and made it interesting enough for the reader to want to know more. It is deep enough already, but one can see that more lies behind the doors that for now remained closed . I liked how some very familiar magical beings appeared in that world, but I do hope that the author manages to do something new with them and so far it looked encouraging. For example a couple of elves played pretty important roles in the story, but one of them already had a pretty significant character flaw despite being beautiful and powerful and all that.

But as much as I love magic and the worlds where it exists, no book would made it for me if it does not have great characters and a fun plot. I loved Adam, I hoped for the better things to come for him, both in his professional, magical and personal life so to speak and there were certainly hints that it will.

There was a potential beginning of the romance for him, but that’s about it. I certainly hope he will get his happy ending when the series is done, but right now there are at least two people with whom such an ending is possible. The book is a magical adventure though, not a romance for now, not even close.

I also have to say that one significant plot twist surprised me quite a bit and that is not an easy thing to do in fantasy.