REVIEW: A Wizard’s Guide to Defensive Baking by T. Kingfisher 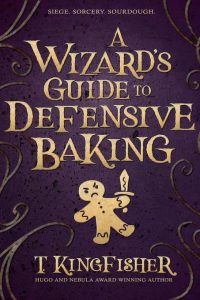 Fourteen-year-old Mona isn’t like the wizards charged with defending the city. She can’t control lightning or speak to water. Her familiar is a sourdough starter and her magic only works on bread. She has a comfortable life in her aunt’s bakery making gingerbread men dance.

But Mona’s life is turned upside down when she finds a dead body on the bakery floor. An assassin is stalking the streets of Mona’s city, preying on magic folk, and it appears that Mona is his next target. And in an embattled city suddenly bereft of wizards, the assassin may be the least of Mona’s worries…

All I had to do was see your name on the cover and I got this book. The title and the slightly alarming little gingerbread man were icing on the cookie. From the start, I realized that this would be sort of dark much as MINOR MAGE was. Unfortunately though, the wonderful little bits of humor that make me giggle and snicker were few and far between and there were clunky moments to be gotten through before Mona saves the day.

The feet and knees reported their willingness. The stomach was not so happy with this plan. I wrapped one hand around my waist and clamped the other firmly over my mouth in case it decided to rebel.

So yes, a dead body in the bakery let both Mona and me know that this was not going to be a good day. Mona loves working in the bakery and discovered years ago that her little bit of magical ability revolves around dough. She can coax bread to be softer, make muffins fluffier, and, for the amusement of the patrons, make her gingerbread men dance. She doesn’t, or so she thinks, have the ability of another woman whose talent was briefly exploited by the military in a way that left the woman a damaged remnant of herself.

After being accused of the murder of the young girl found in the shop, Mona is hauled to the castle by a looming wizard then, when found innocent and let go, threatened by him. Glad to get home, Mona sinks back into her routine only to discover that other wizards such as herself are fleeing the city in fear for their lives. When the truth about what the people of Riverbraid face looms large, Mona is all they’ve got. But is her little bit of magic enough?

There are lots of threads twisting through the book. There is the “heroine must step up and face her fears.” There is the “teen must save the day when the adults can’t or won’t.” There’s also the “why must a teen step up and do what the adults should have done.” There is “abuse of power along with treachery.” There is a “regular citizen being broken in the service of the people.” And the one that actually hit me hardest which is “someone being forced to take something they love and twist it into something bad for the greater good.” Then toss in the “ragtag band of followers who somehow save the day against all odds.”

Mona comes across at times as a bit older than her stated fourteen years yet at times also younger. I see from the author’s note that the book went through lots of editing and re-editing and maybe this is due to that. But Mona does strike me as a teen who is at times bewildered by adults’ actions, angered by them, and hoping that if she hunkers down, this will all go away. Her anger that she has to step forward and be a hero when she’s never wanted to be and that this is due to the fact that the adults who should have been in charge screwed up, sounds an awful lot like the voices of youth anger being raised today.

I liked Mona, I really did. But the adult in me had to fight hard against my frustration when Mona just wanted to bury her head and ignore the looming danger. But then yeah, she’s a teenager who shouldn’t have had to save the day after the ruler in charge, the one who was supposed to do this, fell asleep at the wheel.

Still there were long sections of the story that seemed to mosey along at a snail’s pace. There was a lot of description that bogged down the action and could have been edited out. But then there was also the carnivorous, slightly sentient sourdough starter named Bob. I loved Bob. I’m not sure I’d be brave enough to eat any bread made with Bob starter but he was certainly the most unusual non-human character I’ve encountered in a long time. The other defenses that Mona managed to conjure with her dough powers were fun to read about but Bob takes the cake – or should I say the bread loaf – for me.

I did end the book feeling happy that Mona returned to what she loved but also a little sad and worried based on what the General said to her. There was a lot to like in the story but also some clunky bits that never melded – sort of like the different dough that Mona couldn’t quite get to work together. B-