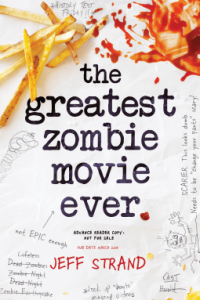 After producing three horror movies that went mostly ignored on YouTube, Justin and his filmmaking buddies decide it’s time they create something noteworthy, something epic. They’re going to film the Greatest Zombie Movie Ever. They may not have money or a script, but they have passion. And, after a rash text message, they also have the beautiful Alicia Howtz-Justin’s crush-as the lead.

With only one month to complete their movie, a script that can’t possibly get worse, and the hopes and dreams of Alicia on the line, Justin is feeling the pressure. Add to that a cast of uncooperative extras and incompetent production assistants, and Justin must face the sad, sad truth. He may actually be producing The Worst Zombie Movie Ever…

When I see books about teens and zombies, yours is the first one I reach for. No wait, I have to be honest and admit that your book is the only one I’ll reach for if it’s about zombies so I don’t know if that’s better or worse but it is the truth. Sometimes your monsters are real and sometimes the mobsters are real but the fun is always real.

Friendship – that’s the main focus of the book. Okay and a zombie movie but this book is mainly about friendship and camaraderie. And fake zombie guts and movie making on a flip-flop budget. Oh yeah, and parental support. Can Justin bring his movie to the (small) screen or will he have to compromise his vision? Thank goodness his grandmother is willing to cough up some cash despite the fact that initially Justin was humoring her about the possibility of Daniel Day-Lewis appearing in the film. Never humor a grandmother about this.

Just to be clear – there are no actual zombies in this book. This is a story about filming a zombie movie, or trying to film a zombie movie. No zombies are either made or injured during the events portrayed in this story. History tests are taken, visits are made to the school Principal, Justin’s arm is broken but that’s mainly due to his insistence on verisimilitude for the documentary footage and not looking where he was going. Justin’s parents also play supporting roles during his quests for cinematic greatness even if they do insist on bed rest after his injury rather than let him continue filming. And his mother helps with craft services aka baking lots of cookies for the cast and crew.

The “behind the scenes” filming is hilarious. The idea of the director’s commentary is almost as good. I mean director’s commentary for a “found footage” film shot on cell phones by 15 year old high school students? Hilarious. The debate between adherents of fast zombies v slow zombies is almost as good as the scenes with Uncle Clyde – the vapping special effects director or Justin’s grandmother who expects a 12.5% return on her $5,000 investment in the film. Was the inept mafia enforcer who visited Justin in the hospital on her behalf real or the product of Justin’s pain medication induced nightmares? The cinematic critique of the special effects by the two cops called in on a noise complaint is almost the best of all.

But really, the main underlying strength of the book is the bond of friendship between Justin, Gabe and Bobby. This is a friendship that will be tested but come out even stronger: it’s a friendship in which they will give their all including prized “never taken out of the box and impossible to buy anymore” action figures in order to raise their shooting capital. This is dedication. This is commitment. This is social media humiliation if they don’t finish it. The stakes are high but the payoff – meeting their goal of lack of embarrassment – is worth all the pain. Great film makers triumph over any adversity. And they’re still friends at the end! B