REVIEW: The Bride Behind the Curtain: Regency Makeover Part 1 by Darcie Wilde 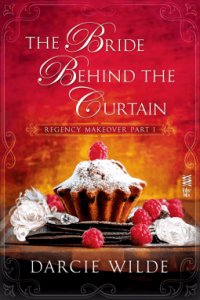 The Bride Behind the Curtain

Adele Edmundson has always been considered too plump and too awkward for the fashionable world. But the girl has a discerning eye for fashion, filling notebooks with designs for beautiful dresses. She also has an eye for the dashing son of French expatriates, James Beauclaire. With a little help from her friends, and a talented modiste’s assistant, Adele’s gowns take society by storm and she begins a secret flirtation with James, who finds himself torn between family loyalties and true love. But as all Adele’s impossible dreams begin to come true, can she resist the temptations of a world suddenly throwing itself at her feet?

Lately, I find myself unable to resist Ugly Duckling/Cinderella stories. I just adore watching the overlooked become The One for someone hopefully worthy of them. I wasn’t sure from the blurb, how complete this story would be but I wanted to give it a try and see.

The writing has more modern feel but it’s both clever and funny as well as being emotional. Lots of tropes are gleefully tossed about – an ugly duckling, a fortune hunting rogue, a Regency houseparty, a Duke, hijinks in the library, and an outspoken, notorious bluestocking who is actually worth listening to. Lady Helene certainly takes the Duke aback.

There are lots of characters for future matches in the series being introduced but mainly in a way that highlights the action of this story rather than being so obviously buy bait for the next. So we have the Dumpling, the Bluestocking and the Redheaded Stepsister bonding together as they flower the wall. And in the other corner … hmmm, the French Rogue, the Haughty Duke and the artistic Bereft Widower.

James has good reason to be hunting a fortune. He’s not lost an inheritance due to gambling or mistresses or anything else. He must provide for his émigré family while papa attempts to regain the family lands and money lost to the Terror. This is both expensive an hard due to papa having supported Republican Robespierre before that one’s fall. Now with the King restored, old friends don’t want to acknowledge the family and the bills in England are mounting. James is also not a cad and though Adele would have as much dowry as her beautiful but catty sister, her intelligence, nerve and bravery in the face of social woundings from the vultures of the ton has won James’s admiration. In fact, James finds it rather easy to talk with Adele, to laugh and dance with her and to coax her into flirting back. In fact, he finds her as delightful as he finds her haughty brother’s glares worrying. Oh but must Little James be referenced so many times to explain how Adele affects him?

The three Wallflowers are the ones Society has ignored or if not ignored, pitied, patronized and demoralized. But something happens when the three of them meet at the country house party. Singly they might be powerless but together … they’re smart, wealthy and members of the ton. Devising a plan, they decide to change themselves and so change the view Society has of them. If they can work this out and make it work, they can get what they want from life – what they thought they’d never have.

I can actually see their plan as plausible. As wallflowers but also members of the upper class society, they’ve seen Seasons, listened to older hostesses and chaperones pick apart society events and also been trained in household management. With their individual skills, they can take this knowledge and transform themselves.

Where things start to get tricky for me is after Adele has this “Ah, ha!” moment and runs into James. Suddenly, they’re talking – at least they do talk – and Adele goes from blah to bold in 20 minutes. She discovers she enjoys kissing and touching James and whoa – good thing they know they can’t go much further in the library what with it being late morning and the rest of the household liable to wander in at any moment.

The swift advancement of the changes for the Three is a touch more believable with the aid of the clearly illustrated books which Helene somehow gets her hands on and shows to the others. There is no place for ignorance when they are attempting to bring themselves to the attention of all the men of the ton. Meanwhile, both Adele’s and James’ plan to renovate themselves proceeds apace. But will it work? Can Adele change the ton’s opinion of her as a dumpling and can James get them to believe he’s changed from a gambling, gazetted fortune hunter to a sober man of business? Kudos to Adele for wanting her tiny bit of hesitation about James’s love to be settled. After all, as she tells Miss Sewell, she’s never known the interest of men other than pitying or after her money. How can she really be sure what she feels for James is love?

After some assumptions and miscommunications, Adele and James come clean to each other but, hhmmmm, fairly quickly. When I started this, I knew that it is part of a series but I wasn’t sure if each part would be complete and lead to the next or if it is a serial. Answer is that there will be a HEA but it’s not quite there yet. I’m interested and caught up enough to want to continue but fair warning to readers who prefer to have an entire story in one book. B-