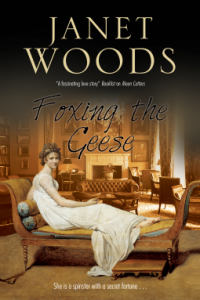 She is a spinster with a secret fortune . . . He is an impoverished earl who must marry money or face ruin . . . Theirs is a love match to be reckoned with

1812. Clever, strong-willed Vivienne Fox is unexpectedly endowed with riches beyond her wildest dreams when a remote cousin dies, leaving her his fortune. Unwed at twenty-four, Vivienne still hopes the right man is out there, but she despairs of ever finding him, and she is determined that rumours of her new-found wealth be quashed, lest she be courted for her purse rather than her heart.

Renowned rake Lord Alex LéSayres comes to an unpleasant decision after the death of his father. If he is to save their family lands, he must marry a wealthy woman – and quickly. Introduced to Miss Fox, his interest is soon piqued. But he must set aside his rising feelings, or else his family will face disaster . . .

The description of the heroine as “strong willed and clever” and the one with the moolah caught my attention. I like a woman in charge and hoped that Vivienne would live up to her billing. On the other hand, Alex sounded like a classic rake of historical romance but with a good heroine, I thought I could stomach him. To my delight, Alex turned out to be worthy of Vivienne and a compelling person all on his own.

Vivienne might be angry about the way she was previously snubbed during Seasons, and she might want to find a husband who loves her for herself and not her recently acquired inheritance, but she isn’t a fool nor does she want to be a spinster. She does want to get married but on her terms – though her father finds her suggestion of doing the asking herself to be shocking.

Meanwhile poor Alex LeSayre really is poor. He’s an Earl but of a ramshackle estate stripped of almost everything of value due to father’s gambling addiction. Now he and his younger brother pragmatically acknowledge that the only way out is for Alex – after all, he is the Earl and the one the mommas will want for their daughters – to marry for money. Too bad for him that he is, as his beloved governess points out, a romantic who admits he’d like to have some feelings of affection for his bride despite his ribald discussions with brother Dominic.

Both Alex and Vivienne remember their encounter 12 years before which ended in a smelly pigsty and with a bogus promise from Alex. When they meet next, Alex compounds his errors by unintentionally giving Vivienne a slight set down, something she obviously takes badly. Aware of his misstep, Alex does quickly apologize to Vivienne. Ah, if only Alex knew about her inheritance. This is cleverly kept from him by Vivienne’s Uncle, to whom the LeSayre family owes a bundle but the question is … why? Is it reverse psychology or does Uncle Howard not wish his only, and admmired, niece to marry into penury? Or just not to Alex?

Now as to why Alex is virtually unknown in London and has rarely visited? Perhaps Father sold off any town house the family might have owned? Or Alex is just one of those Englishmen who prefers the country to town? Vivienne’s decision to buy her new wardrobe at home instead of at a London dressmaker could be from her desire to keep the exact sum total of her inheritance to herself. Alex and Vivienne are soon trading (humorous) digs at each other and beginning to enjoy their sparring opportunities. I was confused at the fact that Uncle Howard is mentioned as “sponsoring” Alex but maybe this only meant footing the bill.

I found this an interesting take on the Season. So many Regency books just use it as the plot device and have the h/h never think about how superficial and artificial it all is, how the expected outcome would be to marry an almost stranger and live with him/her as a spouse for the rest of their lives. Alex and Vivienne do think about this aspect and find it troubling and disconcerting. I laughed after their frank discussion on the limitations of the Season and how it lead to Vivienne calling herself a shrew and Alex giving her a gentle lecture on the nice shrews on his country estate.

Alex isn’t the only man on Vivienne’s horizon and the other one is a snake. He is from the start, Vivienne and Alex are aware of it from the beginning. Vivienne initially tries to do the “polite” thing and not tell him to stuff himself but rather she trues to gently dissuade his intents. When that doesn’t work, ol’ Vivienne takes care of herself and another too. Someone has obviously taught her the best way to get a man to take his hands off you – actually from around her neck – and she doesn’t hesitate to use that method plus a stout stick to whack her message home. Go Vivienne!

Alex and Vivienne’s father Reverend Fox have a long but fruitful discussion of Alex, his family, his prospects, and his role in Vivienne’s life. And it is as he’s defending himself to a woman’s father, no easy task Alex discovers, that he realizes his true feelings for her. The good Reverend isn’t going to hand out carte blanc for Alex to barge back into Vivienne’s life, especially after her traumatic experience. As Daddy says, she’s had her faith and trust in men badly damaged.

Vivienne discovers that the effects of the attack on her have shaken her badly. She defended herself valiantly and successfully, also ensuring that her maid was safe, but the bruises, aches and stiff muscles are the visible and tangible signs of the emotional distress she now feels. Her confidence has plummeted and she now deeply regrets the legacy that has brought her to this pass. Luckily, Alex is determined to woo and wed her. She might have refused his first proposal since she though it was made at her father’s urging, or to salvage her reputation, but he tells her straight out (though gently and with humor) that he will win her in the end.

Vivienne decides to continue to keep the knowledge of her fortune away from Alex as she still hopes he wants to marry her for love and to avoid having all the money men haggle over hers before the wedding. She wants some say in the matter. She also still wants to go after the man who attacked her regardless of any threat to her reputation. It’s being tossed about in London like a dog with a bone anyway so why should she shrink and hide? Alex has matters well in hand though and will avenge his lady love and salvage all – publicly too. The way he neatly turns the situation in Vivienne’s favor is masterful to watch unfold.

Alex and Vivienne develop a truly lovely relationship. Jokey, teasing, humorous, down to earth, admiring. They also deeply respect how the other has dealt with life with little or no money. When push finally comes to shove and Alex is faced with his options to either propose to Vivienne whom he still think is is poor, wait for a rich woman or possibly watch Vivienne be married to another man, he discovers his choice is actually very clear and then proceeds with a way he feels will allow him to wed the woman he loves.

Vivienne’s body takes a little while to heal as does her mind and fears. Thank goodness there’s no “love cure” to be seen. Her father has raised her to be a thinking person and after a lifetime of watching her minister father deal with problems, she’s well versed on how to manage – which she shows in her adroit handling of Alex and revealing the extent of her inheritance. She can also manage a chaperone and make her new mother-in-law feel valued and respected. Vivienne’s a class act, Alex is down to earth and they fit together beautifully. With a few little historical niggles here and there, this one is charming to read. B+