REVIEW: On Chocorua by Robin Reardon 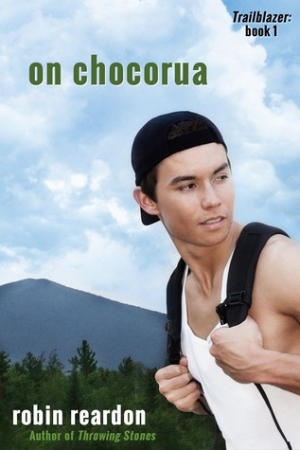 A mountain. A blizzard. A young man new to hiking and to love, making mistakes in both.

First year of college. A great time to re-invent yourself. Nathan Bartlett takes the opportunity very seriously—maybe a little too seriously. And he makes mistakes.

His mistakes? Falling for a straight guy who reminds him of his beloved older brother. Getting too invested in the substance abuse disorders of two other students. And climbing a mountain in a snowstorm for all the wrong reasons.

But he also develops friendships that will be his for life. He faces his inner demons and comes up with a plan. And he realizes that answers to important questions are seldom waiting on the surface but must be worked for, or struggled for, or suffered for—and sometimes all three.

Nathan is a trailblazer on his own journey. His success will be measured not by how well he follows someone else’s path, but by whether he can forge his own. This first book in a series of three novels gets Nathan started on a journey that will teach him about himself, about life, and about love.

I read and enjoyed several of your books and for that reason when you queried DA about reviewing this one, I unfortunately caved in and grabbed the ARC.

I say unfortunately because I struggled with this book and had this not been an ARC review I am not sure I would have finished it. Don’t get me wrong I thought it was a well written story, same as the other books by this writer and it will surely find its audience, I also thought Nathan was a likable narrator. This is the first book by this writer where the character is couple of years older than her usual narrators. I think in the books I read all the guys were sixteen – seventeen years old.

I was not sure initially how old Nathan was when he begins narrating the story of his life, but he starts talking about his first year of college and there are several interludes which are really flashbacks to his childhood . At the end of the book we realize that Nathan just finished his first year when he began the story, so he is nineteen or twenty. The flashbacks work very nicely and don’t interrupt the flow of the story at all.

Nathan is trying to figure out what he wants to do in college, whether he wants to come out as gay and if so to whom. He also has a crush and a little bit of the love story. I liked Nathan, he was intelligent and liked to analyze events of his life and himself, maybe a little too much. Although I was not surprised that Nathan decided to study psychology, he certainly seemed to have analytical mind set :).

The blurb is so vague that I am not really sure what to say about Nathan’s relationship with his family, even though it is an incredibly important part of the book. I can tell you that his parents died in the accident when Nathan was one year old and his grandmother raised him, his sister Nina, and his older brother Neil.

Romance fans please be aware this is so very NOT a romance even if Nathan has a relationship in the course of this book. It certainly didn’t belong to genre Romance and I didn’t expect to see any from this writer.

Even though Nathan is a college student already I would definitely call this book a “coming of age” story for him. This is supposed to be a trilogy so his journey is far from over, but even at the end of this book one can already see changes in him.

Why did I struggle with this book? For two reasons, I simply found it too bleak. It was not angsty (you know, dialed up to eleven emotions in some romance books), it was nicely understated, but it was more powerful than some super angsty books I read. Nathan’s pain stayed with me and I cannot even tell you why since the blurb does not talk about it at all.

The second issue I had was about the author’s note at the end. I know it sounds weird, but bear with me. She talks about researching the issues of addiction, substance abuse, and she names the person (the psychologist I think) whom she mostly relied upon in researching the issues of addiction. However I also interpreted part of her note that Nathan’s attempts to figure out his love life and his relationships with the loved ones as a form of addiction and I just disagreed with that conclusion and for some reason it affected my enjoyment of the whole story.