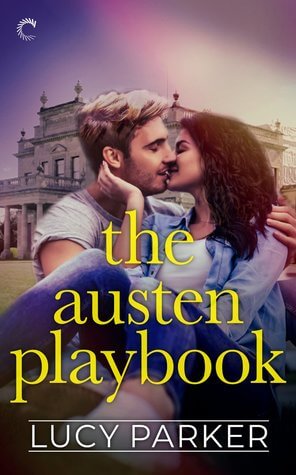 The latest in your London Celebrities series, The Austen Playbook, is another charming delight, featuring an icy, cynical Slytherin hero and an easygoing open-hearted Hufflepuff heroine, each dealing with their own family dramas – which somehow collide together into a spectacular mess and, ultimately of course, a HEA.

Freddy Carlton comes from theater royalty. Her grandmother, Henrietta, was a world-renowned actress and playwright. Her father, Rupert, was heading to a similarly stellar career on the stage when he was injured in an accident and now Freddy is continuing the tradition, treading the boards on the West End. Rupert is Freddy’s manager – which was fine when she was a child star but is less fine now that she’s in her early 20s. Freddy’s interests lie in musical comedy and more lighthearted projects. However, Rupert has ambition for Freddy to be the premiere dramatic stage actress of her generation. Freddy struggles against familial loyalty, misplaced guilt and her own desires. It will all come to a head shortly though because there is a new production of Henrietta’s iconic play, The Velvet Room, coming up and Rupert intends for Freddy to star in it – something which fills Freddy with dread and dismay.

J. Ford-Griffin is a scathing theater critic and grumpy TV presenter (mostly of theatre/literature-related documentaries). His family estate in Surrey, Highbrook, is fast becoming a crumbling ruin and is in need of a significant cash injection. Griff’s parents are flighty spendthrifts and his younger brother, Charlie, tends to come up with harebrained ideas to help which often crash and burn. Griff is the responsible one. The one who holds everything together and saves everyone. His current (and likely last-ditch) plan to save Highbrook involves producing a film about his grandfather, Sir George Ford, who famously had an affair with Henrietta Carlton around the time The Velvet Room was written. George was so enamoured, he built a small theater on the estate – The Henry. Griff’s hope is that the film will get the studio go-ahead and will be profitable enough at the box office to save the estate – at least for a few more years.

Griff, in his role as critic, doesn’t pull any punches. He is described as looking a little like Lucius Malfoy and he has a reputation for icy disdain and cutting commentary. As far as Freddy is concerned, the remarks are often stinging – particularly with regard to her dramatic work (as her heart’s not really in it) but also, she fully acknowledges, terribly accurate. Still, when the book begins, she’s not inclined to think well of him, particularly when she overhears some of his more pointed remarks about her latest performance. She has some thoughts of her own in return.

He probably even orgasmed with a frosty stare off into the middle distance.

Although it was unfair to judge by appearances. Behind the sub-zero remarks and laser eyes, he could be a total marshmallow. Maybe he went home every night, watched Titanic for the hundredth time, and wept sensitively into his pet kitten.

It was about at this point in the novel that I relaxed and settled in for the ride. It’s not just the dialogue that’s full of wit and zing; it’s all through the narrative as well and I lapped it up happily.

The story jumps forward in time to pick up a few months later when Charlie’s latest scheme to “help” turns out to be that he’s signed an agreement for a live TV production of “The Austen Playbook” an interactive murder mystery play based on a popular video/app game which had taken the country by storm the previous year. The audience will vote by app in a kind of “choose your own adventure” model. The play will be done at The Henry – which the studio will renovate at their expense. Griff is dubious and not very excited that it will actually make any money for Highbrook’s upkeep but as Charlie has signed the contract there’s nothing he can do but go along and hope for the best.

Freddy has been offered the part of Lydia Bennett in “The Austen Playbook” – something she’d enjoy and which would suit her talent and interests. The added bonus is that one of the producers of the play is about to cast a West End production of a popular series of novels and if she impresses she will be in the running for the coveted lead. The auditions for the revival of The Velvet Room are coming up too and it’s going to be crunch time soon but “The Austen Playbook” is a project which will be both distracting and challenging. The script, with all it’s variations is vast and the cast have to learn all the different scenario permutations because they don’t know what the audience is going to choose on the night.

Griff is doing further research and preparation at Highbrook for his movie about Henrietta and George and Freddy is there for rehearsals. Despite the previous antipathy between them there is a zing of attraction and in short order Freddy finds that there’s more to Griff than she originally expected.

I liked Freddy very much. For all her reticence when it comes to clashing with her father about her career, she is very brave when it comes to relationships. She’s really open about her attraction to Griff and makes herself emotionally vulnerable with an ease Griff finds terrifying. For his part, he finds that falling hard and fast is actually a real thing that happens and not just in melodrama.

He crossed paths with people every day, he worked with them, occasionally he was physically intimate with them, but in almost every case, they were and would always be a construct. Comprised of the front they put on, the curated side of themselves that they allowed to be seen in public, and his own projection and judgment, what he expected them to be and therefore what he saw. There were few people he would ever really know, see as they were and not through a hundred different filters of perception.

When he touched Freddy, when he looked into her eyes, he felt as if he was starting to see her. It was sexual, it was physical, but it was also the tentative stirring of a connection that he couldn’t explain, couldn’t put into words even in his own mind.

The different ways people behave and present themselves with different people is a theme in the book. Freddy is brave with Griff; a scared child with her father, a younger sister fighting to be seen as an adult by her older sibling. Griff has taken care of his family for so long and been the responsible one, nobody sees him as vulnerable. And he’s blind to the fact that Charlie has grown up and isn’t just a screw up. It’s Freddy who challenges him to see Charlie as he is, something that marks a turning point in the brothers’ relationship.

Griff and Freddy both have an interest in Henrietta and George and The Velvet Room, albeit for different reasons. As they grow closer and she accompanies him on some of his field work they discover something about the play which has the potential to be explosive and throw the Ford and Carlton families into conflict.

There’s a lot going on in the story. Most of it takes place over a fairly short period of time. There’s significant conflict for each main character within their own family and with their own career goals and various cast members from “The Austen Playbook” make life even more difficult for both Griff and Freddy. And in amongst it all, Griff and Freddy fall in love. Their path is fairly straightforward insofar as each other is concerned. Once they see each other as romantic partners, things fall into place. There is conflict between them when Griff’s habit of protectiveness for those he cares about clashes with Freddy’s capable independence – Freddy is not like Griff’s parents and he best not forget it. But mostly their attraction and romance is the easy part. Despite the potential implosion of her family looming on the horizon, with Griff, Freddy has never been happier.

Their relationship is marked by frank conversation and open communication, good-humoured but with some bite nonetheless.

She smiled against his cheek, and did something with her hips, rotating them into his in a teasing shimmy.

“Fuck.” They were still within plain sight of the house, and that reality was rapidly sliding away from him.

“That was my signature move from the Chicago segment of the royal charity performance. I believe you compared it in the Post to a millipede being electrocuted.” Freddy’s voice was husky in his ear, but her laugh seemed to hit him in the chest. “Ain’t irony fun?”

Their physical intimacy had an extra layer of authenticity to it – it’s not the typical romance-novel sex where everything succeeds all the time and multiple orgasms abound – although there are plenty of orgasms. Sometimes they try things that don’t work and sometimes and they laugh about it. Sometimes Freddy just isn’t up for PIV sex and, refreshingly, Griff takes it in stride like a normal person and puts Freddy’s comfort above his own – and then they get creative because that’s how Freddy rolls. I loved it. There was a wonderful maturity to their interactions. While Freddy doesn’t start off the book being very good at advocating for herself with her father or in her career, she always excels when it comes to her interactions with Griff. She tells him what she needs, what she likes and what works for her – and not just sexually. Griff is somewhat befuddled by the energetic whirlwind he’s fallen for but he’s never been happier either. He also tells her the truth (well, mostly) and stands for her and that’s something of a first for Freddy, to have someone so firmly on her side. Griff is solid and dependable and that’s sexy AF.

Because there’s so much happening, the plot moves quickly; it was only the very beginning which was a little disjointed and disorienting, jumping around in time a little to set things up.

I had absolute confidence in Freddy and Griff, no matter the dramatic revelations about Henrietta and George. How everything worked out was a little vague but I expect it would have been boring to know the details and slowed the pace to a crawl in addition, so I was happy enough for the trade off.

I enjoyed The Austen Playbook more than Making Up – this book felt a little closer in tone to Pretty Face and Act Like It – albeit it’s a different book again to any of the previous ones in the series (which, also: yay).