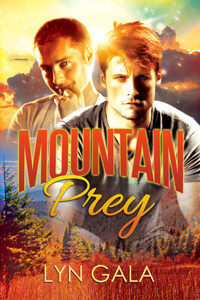 Stewart Folger lives in the Appalachian Mountains, where people take care of their family and follow the Bible. He feels that Appalachian pull in his blood, but that hasn’t tamed his wild side. A youth full of pranks left him with the nickname Stunt and a preference for danger in and out of bed. Other than a few contrary moonshiners who hate him for philosophical reasons since he’s a forestry technician and federal employee, he doesn’t have a problem in the world. Then one day he runs into Alex Soto, a man out for revenge.

Just out of prison, Alex knows firsthand that the justice system doesn’t treat poor and rich equally, so he’ll have to go outside the law to avenge his brother’s death. When an innocent man lands in the middle of his plans, he doesn’t know what to do… other than take him hostage. Unfortunately, he never planned on having to deal with Stunt or with the twisted logic that passes for reasonable in Stunt’s mountain home.

I enjoyed a lot of your works but I hesitated about this one for a long time despite my friend Raine, whose recommendations never disappoint me, telling me to read it.  I knew what in the blurb made me hesitate – a love interest who takes you hostage can make me twitchy.  Finally I decided to dive in and oh my goodness was this book funny.

So one day Stewart aka Stunt Folger is cleaning the trail and suddenly a guy points a rifle towards his midsection and takes him hostage.  Stewart is an adrenaline junky (hence his name).  Not only that, but stress makes him very talkative and all kinds of things pop out of his mouth.

“I tell you what, cut me loose and I’ll go get it now” Danger always had made Stunt a little giddy and stupid which is how he’d learned his nickname”

Stunt is a nice guy who loves the mountains, thinks of them as his home and does not ever want to leave them.  And then we have Alex – someone who served time for a bar fight, and when he got out he realized that his younger brother whom he had raised got into drugs and was killed on a drug lord’s orders.  Alex has decided to kill the drug lord and if he dies in the process, so what. He did not seem to care.  The only problem is Stunt, who accidentally involved himself in Alex’s plans and Alex took him hostage because he did not know what else to do.

So we have Stunt, who talks a lot when he is scared ,and Alex, who as we will learn later on never really had a good plan and almost lost hisgrip on the situation, and conversations like this start coming out:

“With his heart pounding painfully hard, Stunt studied the man and tried figuring out if his life expectancy had just dropped from years to minutes. “You don’t want trouble any more than I do. You don’t want to pull that trigger.” Stunt kept his voice nice and quiet, like when some neighbor had his crazy-ass dog ready to bite you in the balls if you didn’t run fast enough.

Mr. Gun gave Stunt a real dirty look, the kind teachers and mothers loved to inflict on others. “I don’t plan to shoot you”.

“That whopper of a gun there is saying something else. I’m hoping it’s a liar.” Knowing he didn’t have a whole lot of choices, Stunt turned around, putting his back to Mr. Gun.

Before this day was done, Stunt was going to have a heart attack if he didn’t get shot in the head first. “If you’re  going to shoot me—“

“I already said I wasn’t.” From the tone, Stunt had managed to offend the crazy man. Great. “I may, however, gag you if you don’t shut up and start following orders.”

“And you look sane. Imagine that,” Stunt shot right back.”

“I’m getting sick of telling you I don’t plan to kill you.”

“Imagine that. I’m annoying you,” Stunt said in a flat voice. He somehow wasn’t feeling too much sympathy for the man.”

I hope you get the gist of their initial bickering.

I think that in order to enjoy this book one has to suspend a lot of disbelief and roll with the punches. When I managed to do that, I had a whole lot of fun, because the plot twists, each one crazier than another, just kept coming. Yes, the author convinced me that Alex was a good guy who did not exactly think things through and just launched a half-cocked revenge plan. He never planned to hurt anybody else and was having trouble dealing with unexpected repercussions.

“Alex smiled and ran a finger over Stunt’s cheek. “Next time, I need to find a quieter hostage. Actually, next time I might want to just hide better, because this whole hostage-taking thing… I didn’t  think it through very well”.

I cannot really tell you why the guys end up having sex. I mean obviously there is a fast attraction, but no there is no sex while Stunt is “officially” Alex’s hostage, no matter how absurd the whole situation is. But I really want you to experience at least some of the crazy plot twists for yourself and this is the one I really do not want to spoil, because it was so funny. I’ll just say that when Stunt decides that he wants to help Alex achieve his mission, but to modify it by putting the drug lord in jail instead of killing him, Stunt decides that they should enlist the help of someone who is well known, God loving, and influential in the mountains because (according to Stunt) Elijah would not want a drug lord neighbor if he can help it. Stunt eventually manages to talk Alex into it. Should I tell you that there came a time when both of them almost regretted coming and asking Elijah for help?

“Don’t really see any other choice,” Stunt pointed out. “If you have any real smart ideas, I’m open to suggestions, but seeing as how your plans so far have gone, I’m not counting on you to fix this.” He felt a flash of guilt as pain twisted Alex’s features. “And I ain’t counting on me either, seeing as how I encouraged you to come up here in the first place.  Face it. We ain’t got but one brain cell between us, and neither of us has been using it lately.”

I have to say that I was nodding as I read this paragraph, especially about the brain cells and wanted to tell Stunt that true words had never been spoken. Acting smart these guys were not, not at all, but I still liked them a lot despite their stupidity, which was truly not a small feat to achieve.

Of course it all ends well and I was happy, but sheer craziness of the ending was what pushed me over the edge a little bit and lowered the grade. As much as I managed to roll with the punches the book delivered for the most time, the ending had me asking “Wait, what?” one time too many.