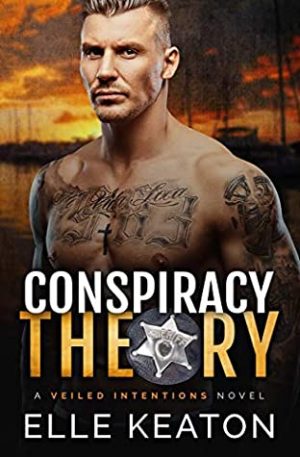 Moving home after his father’s death forces Sheriff Mat Dempsey back into the closet, but he’s happy enough. Right?

Bitter and dispirited after years investigating homicides, Niall Hamarsson heads for the only place he’s ever called home.

A body is discovered in the waters off Piedras Island and Mat’s first priority is investigating the murder. He doesn’t need the help of the ex-detective, what he wants from the man is entirely different.

Their chemistry is electric, and two heads are better than one, but will Mat’s pride get in the way?

Conspiracy Theory is a dual POV about a broody introvert and a somewhat patient Sheriff–It’s hard to come in from the cold when that’s all you’ve known. Veiled Intentions is a series following the same couple as they grope their way to their happily ever after.

You are a new to me author and as of right now I do very much intend to read the second book of this series if/when it comes along, some issues notwithstanding.

I don’t know what I think about the blurb. It does not really omit anything in order to give you a decent set-up, but it also exaggerates some things in my opinion and creates a mistaken impression in some ways. Like when I read the blurb I thought the book’s romantic storyline would be dealing with a “from enemies to lovers ” trope. I do enjoy that trope when it’s well executed don’t get me wrong, but that was not it. At all.

I mean there is some animosity when the main characters meet, but it ends as quickly as possible. Niall is a bit of abrupt and snippy at first and even at the end, but he has issues with the world way more than he has issues with Mat. Niall is a lovely guy but he had baggage I thought, lots of it. None of that baggage was actually his fault, but of course it affected how he interacted with the world around him, somewhat.

I loved both characters, I loved their chemistry, but note – the book is just the beginning of the romance. Their attraction is not on the background in a sense that both men think about it quite a lot (and act a little on it at the end :)), but once again Niall has baggage and there are events taking place on the island that occupy their attention.

I really liked the description of the island, it just felt atmospheric to me and I actually enjoyed the actual writing (not the actual editing of such – as I always say, I note some things and I worry there are more things that were not fixed but should have been).

The mystery/suspense plot left a lot to be improved upon. First of all it was not mysterious. Oh maybe the problems are connected with certain person? YES, yes they are. Oh, another person involved? Sure thing. But the worst to me was when, very close to the end, they figure out the details of the crimes – too contrived, several coincidences that I could leave without.