REVIEW: Break in by Dick Francis 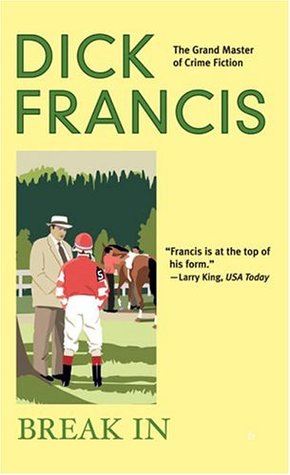 Steeplechase jockey Christmas “Kit” Fielding has had more than his share of close calls both on and off the course. But trouble hits close to home when a grudge between his family and his sister’s in-laws turns into a blood feud.

I’ve always loved to reread my favorite books – in recent years, after I found the m/m genre and started reviewing it I had less time to reread, but I am getting back into it. I had been thinking about a couple of books by Dick Francis which I read in Russian translation a couple of decades ago and wanted to read them in the original. I could not find them, which I suspect was because the title was not an exact translation; instead I found this book, which I never read before.

I know that Dick Francis was a jockey before he became a writer, or was he both a jockey and a writer at some point of his life?  I am not sure, I am not familiar with his biography, I am just saying that when he wrote about the world of horse racing, it was a world he seemed to know very well and it showed in his books.

Kit (because I completely share his dislike of his full name) Fielding is a jockey who often but not always wins his races. He loves racing, and he grew up in a family who has been working in this world for quite a while.

“I raced, I thought fancifully, as one might play a violin, making one’s own sort of music from coordinated muscles and intuitive spirit. I raced because the partnership with horses filled my mind with perfections of cadence and rhythmic excitement and intensities of communion: and one couldn’t exactly say aloud such pretentious rubbish. “I feel alive,” I said, “on a horse.”

The Fieldings also seem to have a feud going on forever with another horse-racing family, the Allardecs. In fact his beloved grandfather, who raised Kit and his twin sister Holly, still does not have many good things to say about them. Several years ago Holly committed the sin of marrying Bobby Allardec, and needless to say the older generations of the familes on both sides were not happy. Neither was Kit initially, but he came around very quickly, and came to their wedding and gave Holly away.  Kit and Holly were always very close, and while obviously they could not communicate on the same intimate level as they did before ( I let you discover what I mean when I say “intimate level” but it is not a physical intimacy, don’t worry), they remained close friends.

One day Holly comes to Kit’s races and asks for help because somebody is trying to destroy their horse training business. Bobby was already struggling financially, and after a certain newspaper wrote about his situation in a very over the top way, somebody delivered the newspaper to all Bobby’s suppliers, creditors, horse owners. Needless to say, his problems increased dramatically. Kit loves Holly and Allardec or not, he likes her husband, so of course he agrees to help.

I really liked Kit. It was clear that he was a tough cookie when he decided to put himself in the line of fire and tried to figure out who had it in for his brother-in-law badly enough to destroy his business. I liked that he never gave up, even though he knew that he could get hurt very badly, especially considering whom he eventually went up against. I liked his intelligence and generosity, but there was something else in Kit that I liked, which I rarely see in mainstream mystery/thrillers. I don’t know how else to explain it except to say that I felt like Kit was a romantic lead in the best sense of the word. He was not without flaws, but he was just so darn likeable. He was not sitting around feeling sorry for himself and the people he was trying to protect for pages and pages, but he was not afraid to feel things, rather than just acting upon them. He acted upon things most of the time and rolled with the punches, do not get me wrong.

“It’s not like that here.” Here, I thought numbly, one bargained with threats. On the one side: I’ll get your wrist slapped by the Press Council, I’ll get questions asked in Parliament, I’ll see your ex-convict journalist back in the dock. And on the other, I’ll slice your tendons, I’ll lose you your jockey’s license for taking bribes, I’ll put you in prison. Reviled, dishonored, and with publicity, disgraced. Catch me first, I thought.”

The book was a thriller (I would be hard pressed to call it a mystery because the villains are revealed pretty early and I think even the final motivations of some of them were not intended to be a surprise), NOT a Romance, even though Kit had a secondary romantic storyline going on which had nice ending, maybe even an HFN ending.  But I would say that Kit’s characterization made me think of romantic lead’s characterization, absolutely.

Even though I did not think of the book as a mystery (there was no murder, even though there was a murder attempt or two), I did not think it hurt the story in the slightest. It moved fast, I could not put it down and I was rooting for Kit to win all the way.