Review: A Ferry of Bones and Gold (Soulbound #1) by Hailey Turner 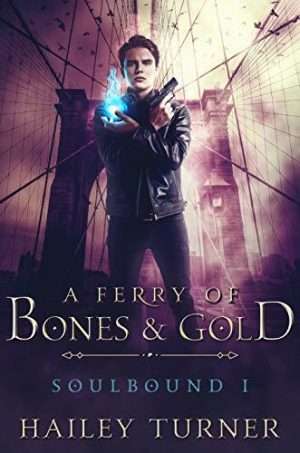 When the gods come calling, you don’t get to say no.

Patrick Collins is three years into a career as a special agent for the Supernatural Operations Agency when the gods come calling to collect a soul debt he owes them. An immortal has gone missing in New York City and bodies are showing up in the wake of demon-led ritual killings that Patrick recognizes all too easily from his nightmares.

Unable to walk away, Patrick finds himself once again facing off against mercenary magic users belonging to the Dominion Sect. Standing his ground alone has never been a winning option in Patrick’s experience, but it’s been years since he’s had a partner he could trust.

Looking for allies in all the wrong places, Patrick discovers the Dominion Sect’s next target is the same werewolf the Fates themselves have thrown into his path. Patrick has been inexplicably attracted to the man from their first meeting, but desire has no place in war. That doesn’t stop Patrick from wanting what he shouldn’t have. Jonothon de Vere is gorgeous, dangerous, and nothing but trouble—to the case, to the fight against every hell, and ultimately, to Patrick’s heart and soul.

In the end, all debts must be paid, and Patrick can only do what he does best—cheat death.

A Ferry of Bones & Gold is a 115k word m/m urban fantasy with a gay romantic subplot and a HFN ending.


I got this book on KU.
Dear Hailey Turner,

I read this book in preparation for buddy read our group will be doing soon. Several book buddies read it before and kept recommending and finally I did it. I enjoyed it quite a bit, although I have very big reservations about author managing to maintain the tension between the main couple for seven LONG books. I guess I shall see how it goes when I start book two.

This is an urban fantasy with the strong romantic storyline front and center. I found both main characters to be very appealing and really liked them together. But this is an urban fantasy with romance in it and actually I am not sure whether romance will hold up if the urban fantasy storylines are taken out. The blurb mentions Gods which come wanting to collect on Patrick’s soul debt. Obviously I cannot talk much about why Patrick owes soul debt to Gods without talking some very detailed spoilers, but I will say this. This book is not the first fantasy book which presents the idea that the immortals from some old religions get weaker when people forget about them and get stronger when they get some new followers. I think Neil Gaiman for example presented this idea really well. I really did like how this author put its own twist on some old Gods appearing in America.

And man, so far the Gods that appeared are from my very favorite mythos that I learned and loved when I was a child. No, I am not telling you who they are. I loved that they don’t seem to give a crap about mortals’ feelings and problems, they only wanted Patrick to help them because he supposedly owed them. I mean, my sympathies were and are solely on Patrick’s side, I just thought that Gods made sense – they only cared about themselves and their family, as they should be. And I still want Patrick to do what they want, not to ever incur any new debts (soul or otherwise) and kick them to the curb.

I loved Patrick, did I mention how much I loved Patrick? He is such an honorable man, obviously with enough scars from his magical military service and some very specific things he participated in that he could have stayed on the sidelines when the events of the book started, but he does not and he tries to do his best no matter how hard it is for him.

I loved that during the book he does obtain some new friends, hopefully some found family and we do see that he had friends in the past too and not all of them let him to shut them out.

I also really loved him with Jono, I think they have great potential as a couple, but as I said in the beginning of the review, I am really nervous about seven books. Really!

The book moves fast, has some great magic in it and I have read it in two days. It was quite an enjoyable read.

→ Sirius
Previous article: REVIEW: The Year of the Cat: The Untold Story of the Lunar New Year Race by Jeannie Lin (aka Phuong Chi Nguyen)
Next Post: REVIEW: Georgie, All Along by Kate Clayborn