REVIEW: Georgie, All Along by Kate Clayborn 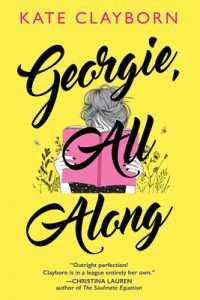 Georgie Mulcahy returns to her home town of Darentville, Virginia to spend some time with her best friend, Bel, and to sort out her life. She’s been working in Hollywood as a PA to a screenwriter and when said screenwriter decided to leave LA and try a less hectic life, Georgie found herself without a job and without a direction. She’s spent a lot of years looking after other people and hasn’t paid attention to herself. She feels “blank”. She doesn’t know what she wants. Coming home, even though on any view she had a successful career as a PA, feels more like failure than anything else. She has a reputation (from back in high school) as being flighty. Her parents are hippies who march to the beat of their own drum so they were no help in her quest to fit in. (That’s pretty much the only thing she lacked from them however.)

On her way into town she stops to pick up a milkshake for herself and Bel and bumps into her old music teacher, Mrs Michaels, who Does Not Approve of her in that passive-aggressive way women, especially older women, can do so well – it’s in the tone and the eyebrows I think – and Georgie just feels wretched. It does not help that she’s left her wallet in the car and can’t pay. Now she looks even more incompetent. She is “rescued” (ie he pays for the milkshakes) by a surly dude in a ball cap. He’s dusty and tired-looking, not into conversation, but also, Georgie can’t help but notice, very good-looking.

Once Georgie gets to Bel’s she feels even more lost. Annabel has a baby on the way, a new house which is all spick and span, beautiful and organised. She and her husband, Harry, have recently moved to Darentville from the DC area. They seem to have it all together. Georgie came to help but what help does Bel really need? There is one room in the house which is disorganised though and when going through it for Bel, Georgie finds an old “friend fic” that the pair did in middle school and into high school. It was full of plans for things they would do in school – large and small rites of passage that teenagers often went through in the Darentville area (for example, writing a wish in Sharpie on your arm and jumping off Buzzard’s Neck dock) and also full of Georgie’s fantasies about her teen crush – Evan Fanning, the local golden boy.

All those things she and Bel wrote? Well, they didn’t end up doing any of them. Evan Fanning certainly never took her to prom. But now, maybe Georgie can revisit some of the fic, with tasks brought up to date for the present day of course and by doing so, maybe she will be able to fill in the blank and decide what’s next. She feels like she should have a plan. That’s how to be a successful grown-up, right? But she is at a loss, so maybe the fic will kick start the plan-making.

Georgie’s parents are out of town on one of their many road trips and Georgie will look after their plants and the house while she’s in town. Remember when I said that Georgie’s parents march to the beat of their own drum?  Well, as it happens, they’ve also arranged another housesitter; Levi Fanning. The grumpy guy from the milkshake shop.

Levi is Evan’s older brother. He’s the screw up. The one who got in trouble as a teenager and was sent away. He doesn’t have a relationship with his family anymore and it’s a pain point for him. He doesn’t talk much and certainly not about what happened when he was young. Levi lives a stable, structured life. A small life. Georgie terrifies him but also fascinates him because she is so expansive. Everything about Georgie is large and open and chaotic. Georgie lives in the now. Levi is always thinking of the next thing.

Levi builds and maintains docks in the Darentville area. He and his rescue pit bull, Hank, are a pretty self-contained team. (Hank is awesome.) But then he meets Georgie.

For a few days, they share a house, bumping awkwardly around each other, feeling the chemistry they have but not sure what to do with it. Levi makes some mistakes and needs to apologise but he does it well and Georgie senses he’s, in some ways, something of a kindred spirit. For different reasons both of them are searching for their place, both of them feel they don’t fit, they don’t measure up.

As Bel is heavily pregnant, she cannot do quite a few of the things Georgie picks out of the friend fic but Levi eventually volunteers to be her wingperson. Mostly this gives Georgie and Levi opportunity to spend time together.

While I didn’t get into the trouble Levi did as a teen, I related more to Levi than Georgie; I’m more into stable structure – chaos scares me. Georgie is the kind of person I’d like to be around and whom I’d admire for all of the qualities she has that I don’t, but I sometimes found it difficult to understand where she was coming from. I admit I didn’t quite see how the fic was going to give her any answers and in the end, I thought it was a bit of a McGuffin. Still, over the course of the book, Georgie realises who she is and her journey to self-acceptance was relatable.

I enjoyed the friendship Georgie had with Bel and how it had expanded to include Harry. The history that Bel and Georgie shared and that “ride or die” that she and Bel were for each other was great to read.

“Who you are is wonderful,” she says, and of course I love her for it. But I don’t want a murder defense at this moment. Sometimes, someone loves you so much that they can’t quite see you clearly. Right now, Mrs. Michaels might be more right about me than Bel is, and that’s a bummer, since Mrs. Michaels truly sucks.

Georgie also develops friendships with others in the area – most particularly Evan and Olivia – Levi’s siblings. This creates some tension of course because of the estrangement between Levi and his family.

The book is split about 50/50 between POVs from both Georgie and Levi. I’m a hero-centric reader and, as I said above, I found Levi easier to understand and relate to so of course, I enjoyed his sections more. I loved his baffled attraction, his reluctant welcome of Georgie into his life. How he couldn’t help it. That’s catnip to me. As much as I’m a hero-centric reader, a lot of what I like about a hero is bound up in what he thinks of his love interest I’ve realised. Like here:

I pretty much pay attention to all of it, but also, she came out of the bathroom with that robe on again, loosely tied over a pair of sweat shorts and another one of those tank tops that’s been sent to murder me. I probably miss a few things.

And I’m sure I miss more than a few things once the movie gets started, including a good number of people getting murdered by things other than tank tops.

Levi stumbles quite a few times in his courtship with Georgie. He’s not used to peopling. He’s not used to acceptance. He’s not used to talking or explaining himself. And, when threatened, he tends to close up which is kind of the opposite of what Georgie needs. But he’s so all in for Georgie he stretches those emotional muscles and along the way, finds his own self-acceptance.
Levi talks to Georgie but he will never be gregarious like her. And she doesn’t require it of him. They fit together nonetheless. Every now and then though, Georgie will tempt him to step a little outside of his comfort zone and he finds his world getting bigger and bigger.
All of this is wrapped with beautiful writing which kind of sneaks up on you and then hits you between the eyes..
Grade: B/B+
Regards,
Kaetrin

→ Kaetrin
Previous article: Review: A Ferry of Bones and Gold (Soulbound #1) by Hailey Turner
Next Post: REVIEW: Daughter of the Sunset Isles by Dinah Dean