REVIEW: Worth the Fall by Claudia Connor 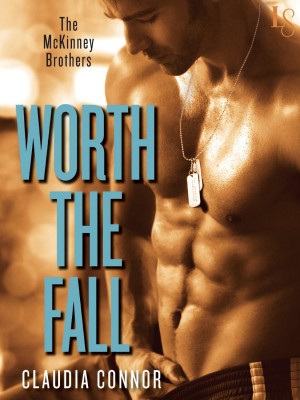 This was a book I avoided reading despite many recommendations. My general feeling about books with children is that they are overly precious, or too annoying, or both. When I read that the heroine had four children and was pregnant with her fifth, I couldn’t imagine how this book could be romantic. My lack of vision is probably why I’m the reviewer and not the author.

Abby is on a family vacation with her four kids when she meets Matt, a Navy SEAL taking mandatory recovery after suffering a head injury. Matt is anxious to get back to active duty but agrees to play wingman to his cousin at the beach. There he meets Abby who is watching her four kids under the age of six and strikes up a conversation with her young son. Matt is surprised at how attracted he is to Abby who he sees is pregnant, mothering several small children, and alone. The reader, however, has been prepared from page one that Matt is dissatisfied with his single lifestyle and was looking for something serious and more settled but because of his job, he was limited in his options. He had even mentioned to a fellow SEAL that he wanted to leave the service and start a family–a suggestion that was met with shock and horror.

Abby is used to being alone. Her husband was a very successful lawyer and he traveled quite frequently. In some sense she was a single mother for most of her married life. Her husband wasn’t present during the birth of her last child and Abby had to ensure that there was a taxi ready to take her home from the hospital. The death of her husband meant a loss of occasional intimacy but she had been parenting without him.

That said, I was relieved that Matt, the Navy SEAL, was present because the kids exhausted me on the page. They were constantly active, wanting to build sand castles, swim in the pool, or go and eat. Abby (and I as the reader) needed Matt to take some of the burden off of Abby’s shoulders.

It helped that Matt grew up in a big family himself. He was one of the oldest of seven kids—six boys and one girl. Abby’s brood of four with one on the way was nothing compared to the family environment he grew up in. The low key way in which the size of these families were presented made the large families seem ordinary rather than extraordinary. And Matt’s attraction to pregnant Abby was underplayed as well. Abby herself had no real self esteem issues. Her internal angst was more focused on whether she wanted to tie herself to a man who was gone as much as her husband was.

And a man who lived thousands of miles from her North Carolina home. It was the distance and Matt’s career that presented the biggest impediment to the romance, not the children. Matt lost his best friend in an operation over a year ago. Teddy had exhorted himself to not quit. Matt believes that this is a plea for not to leave the SEALs, something that Matt had brought up before Teddy’s death.

The romance develops quite slow but it is perfectly timed for the story. The week that the two meet at the resort is filled with children. There is little time for physical expressions of lust but it was important for the reader to see how well suited Matt was for fatherhood, not just of one child, but of several. It also made the romance believable.

As the romance does progress, however, Matt’s career creates an impossible obstacle. He is torn between the promise he made his dead brother at arms and the promises he’d like to make to Abby and her family.  I liked how Abby wasn’t imperiled in any way by being a single mother. She had resources and she enjoyed mothering. That was her calling. I never got the sense that she was fatigued or beat down and needed rescuing. The conflict was primarily Matt’s internal dilemma and whether Abby wanted to risk her secure life for Matt’s uncertain promises and future.

The only problem I had with this story is that I found it unrelentingly gender normative. The girls were princesses and the boys were either jocks or jocks in training. There wasn’t anything about it that was insulting, only that with the four children there is no deviation from the gender stereotypes. The girls enjoyed playing with dolls and dressing up. The oldest child, Annie, was a serious reader. The gender portrayal was very traditional. B