REVIEW: What the Bride Didn’t Know by Kelly Hunter 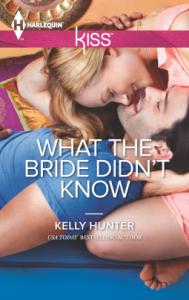 You know I just have to look at blurbs whenever I see your name now. The one for this book got me interested in trying it and once I got started, the name of Lena’s other brother kept ringing vague bells until I realized that, yes I did read his book. I like friends to lovers plots but am not as wild about amnesia. Still, in your hands, I thought “what the hell.”

Australian Special Ops expert Trig Sinclair has always kept his romantic distance from childhood friend and colleague Lena West – ever since Lena’s brother Jared gave Trig some pointed “keep off” guy glances about her when they were all teenagers. But that hasn’t stopped Trig from wanting a future with Lena.

Now Jared’s been missing for 19 months and Lena’s afraid of what he might have got himself into trying to solve the mystery of who shot and nearly killed her on an ops. Lena heads to Istanbul to try and just see if he’s alive and the West family rallies Trig to go along with her since her recovery has left her a bit wobbly on her feet.

Trig thinks it’s the perfect time to finally see if he can move their friendship to something deeper, something permanent but an attack in the bazaar leaves Lena with no id papers, a spotty memory and Trig claiming to be her husband to expedite her treatment in hospital. As days go by and Lena still can’t remember, he reluctantly keeps up the charade, nobly tries to keep his hands off her and gets tortured by her happy attempts to consummate their “honeymoon.” But what’s going to happen the day she realizes what he’s been up to?

Ma Gawd but Lena and Trig can be stubborn people. Lena in not believing in her own self worth and Trig in his determination to finally win her love. The reason Lena doesn’t annoy me the way other “Oh, I’m just not beautiful/smart/tall/endowed/whatever as other women!” heroines normally do is that she has unconventional athletic beauty and that everyone in her family is a damn maths genius. Since I’m not a math genius either, I’ll cut her some slack about that. To your writing credit, her character stays stubborn to the end – she just shifts her focus to trying to get the details of their short “married life” out of Trig and then entice the poor bastard into bed. At one point I did wonder if she was just deliberately pulling his chain as a way to get back at him but when her memory finally returns, I realized she wasn’t. It was still fun to watch.

He took a deep breath. ‘You also need to know what

band and wife. Because it gives me ideas.’

She didn’t understand. He’d peppered her with too

much information and not enough time to process any

He looked at her as if she were a little bit dim. ‘Yes.’

‘Pretty sure I can.’

‘Yes.’ He was looking at her as if she were minus a few brain cells again.

Trig is a wonderful guy. He’s wanted Lena for years – especially after he watched her almost die on the mission – and now that she’s as healed as she’s ever going to be, by golly he’s going to do something about it. The man has laser focus and it’s all on Lena. Good thing he’s strong enough, mentally and almost physically, to hold out long past when lesser men would have caved to her sexy nightie and bed snuggling efforts. Trig is a rock in getting Lena well and looking out for her – albeit helped along by the knowledge that her brothers will gut him otherwise.

“I can’t find my honeymoon nightie. Do you have it?”

Trig opened his mouth as if to speak and then shut it again with a snap. He shook his head. No.

She looked beneath the pillows. “Did we rip it?”

Still no sound from Trig.

“Could be the cleaner mistook it for ribbon,” he said at last.

“There wasn’t much of it. But there were bows. Lots of bows. Made out of ribbon.”

“Oh.” Lena tried to reconcile ribbon nightwear with the rest of her clothing. “I really should be able to remember that.”

She passed her husband on the way to the shower and when she stepped beneath the spray she could have sworn she heard him whimper.

When the truth is remembered, Lena is rightly furious yet also eventually willing to listen to her own conscience and her sister-in-law’s advice about how much work she put into getting “her husband” Trig into bed and how mightily he resisted. And then they talk. Well they’ve talked all along – and the wonderful dialog of yours I enjoy so much is alive and well here – but they talk to get over the white lies and on to a future together.

‘Can we ignore them and get married now?’ Her voice still wobbled.

‘I’m ignoring them. I can’t even see them. There’s only you.’ He closed his fingers over hers and brought her fingers up to his lips.

And the amnesia? Well it’s still not my favorite pIot device but here it wasn’t too bad. I assume that Jared’s story will appear eventually but I’m glad this one focused tightly on just Trig and Lena and them finally getting to the altar. B