I’ve enjoyed the previous books in this series on audio – this is the first one I’ve read. Having listened to Sophie Eastlake narrate the previous five books though, I still heard her voice reading me the story as I devoured Kinked. I also have a confession to make.  Aryal was never my favourite Sentinel.  She’s difficult and abrasive and hard to like.  I have a thing for Graydon but Aryal never really caught my attention much.  Perhaps that was because she didn’t like Pia and I did?  Nevertheless, as much as I wasn’t Aryal’s number one fan I was still keen to read this book and see where your world building would take me next. 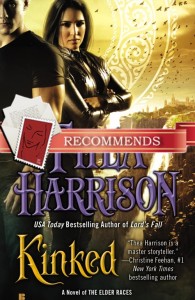 What a surprise then to find that Aryal was an amazing heroine.  Spending time in her head gave me a new (and previously unheld) appreciation for her character. One of the things I enjoyed most about the book was that Quentin was not at all phased by her abrasive charm – in fact, he reveled in it and came to value it.  So Aryal realised new depths and revealed a softer side that perhaps even she didn’t know she had but she didn’t have to go through a personality transplant to find her HEA.  Aryal may be an unlikeable heroine but she is essentially the same person at the end of the book as she is at the beginning and for that alone you deserve the applause of Romance Stadium.  She didn’t have to conform to find love.  She didn’t need “fixing”.  I loved that. I can’t even tell you how much.

As it happened, Aryal and Quentin were perfect for each other – each of them driven and wild and just a little bit out of step with the rest of the world.

She quieted that internal whip that drove him because she became the whip, her soul as sharp as a knife.

Let her heal him. Let her be his buffer.

They were so unapologetic, so kinked.

The story begins closely after the end of Lord’s Fall – Quentin and Aryal are fighting and all the other Sentinels and Dragos are at their wit’s end  – Dragos sends them on an assignment together and orders them to work out their differences. They are to be away for at least two weeks, no longer than one month and if they don’t work out their differences, they will both lose their Sentinel positions.  Dragos is not fucking around here.  He is Over. It.   He sends them to Numenlaur – the elven Other land which was closed to everyone for many many years.  The Numenlaurians were held in thrall by Amras Gaeleval and those who survived the events in the previous book have not yet recovered sufficiently to return.  The way is open and Dragos wants Aryal and Quentin to scout around and ensure there is no looting and also to secure any sensitive items which may be unprotected.

I think the book works best if readers have read the previous books because it is easier to understand the world, the events that led to Quentin becoming a Sentinel, his and Aryal’s antipathy to one another, as well as the assignment Dragos gives them.  The romance is fairly enclosed so I suppose readers could pick this up as a stand alone, but I don’t think they would get as much out of it if they didn’t understand the background to this point.

On the way to Numenlaur, the sexual awareness of each other which has recently bloomed becomes an itch which has to be scratched.  Aryal and Quentin make a bargain with each other – fifteen minutes each totally in the other’s control.  As is so often the case in romance fiction, such a bargain only leaves them wanting more.  That, and the way they have to work together, how they actually start talking to one another, has each of them reconsidering their previous plan to arrange for someone to conveniently kill the other while they are away – thus solving the Sentinel problem.

When they get to Numenlaur, things there are eerie and incredibly sad.  And something or someone is watching them.  The main action does only traverse two weeks or so, but the pressure cooker environment and their previous two years of sniping at and baiting each other meant that I had no difficulty in buying into their romance.  Even when they hated one another, they each also respected the other’s strengths and abilities.  As they are forced to trust and rely on one another, their bond deepens.  And when they are threatened and their lives hang in the balance, they find in each other a true partner.  And, through it all, they remain true to their characters – while there is tenderness,

As the panther found his peace, the harpy stroked his hair and discovered tenderness. Then everything that lay twisted between them came clear as they reached the heart of the labyrinth they had been traveling together.

there is plenty of snark too.

He paused to make sure that sank in. Then he said, “Number four. There are people who love you. Niniane and Grym. Hell, maybe Grym is right, and Dragos does too. Graydon’s pretty mad at you, but you know he loves you.” He took a deep breath. It was time to throw himself on his sword. “Me.”

Her eyes dilated until they were mostly black. “You?”

I completely bought into their partnership and their mating.

There was also plenty of action to the story and some very sad moments too.  I think the villian of the piece was lightly drawn.  I was so caught up in Aryal and Quentin and their perspectives of events that I didn’t really notice until very near the end, but her motivations were only very lightly touched upon and although she caused a lot of damage, she wasn’t featured strongly as a character.  I found the pacing of the book fine while I was reading it but it occurred to me afterwards that there is a huge flurry of activity and information right near the end  and up until then it was mostly about Quentin and Aryal working out their relationship (vastly entertaining as it was).  This didn’t bother me all that much, as I’m primarily a romance reader but those looking for a more evenly balanced mix of action and romance might find it a bit uneven.

In some respects, this book reminded me (in a good way) of Ilona Andrews’ Kate Daniels series – perhaps that was in the nature of the magic that was used, I’m not sure.  It was sexy and romantic and refreshingly different.  I really liked it.  I give it a B+.

“I think you might be both my suicide and my salvation.” And he needed her for both. “I love you like a heart attack, woman.”