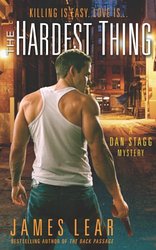 Killing is easy. Love is… The Hardest Thing

Once a major in the U.S. Army, Dan Stagg fell afoul of Don’t Ask Don’t Tell. In his late 30s, tall, and muscular, Dan is prone to violence, always upholding what he views as justice. He’s offered a great deal of money to protect the young male “secretary” of a powerful real estate broker. The vain, shallow—but most of all hot—young man’s idea of protection includes sex. Dan quickly realizes something strange is going on: he’s being used as a shield for a much more sinister operation and must choose between easy money and sex or the ideals that he embodied in the Army. Why should he do the right thing—particularly when the army betrayed him? The Hardest Thing is a sexy gay mystery as only James Lear can write it: filled with lots of gay sexual encounters, romance, sweat, violence, and conspiracy.

I have read good reviews of your books before but have not read a single one of them because the reviews stressed that you write erotica first and foremost, and if I am in the mood for pure erotica, I usually pick up something short. But recently I saw this book on sale (and 1.99 versus 9.99 is a big difference) and the book claimed to be a mystery on its cover, so I caved and bought it.

I fell in love with your protagonist’s voice from the very first page.

“New York City on a dirty night in July is not my favorite place to be. I’d rather be almost everywhere else – I was thinking of the beach in Connecticut or up in the Green Mountains of Vermont, or any of those overseas places I’ve traveled, most of them warzones, where you can breathe without feeling like someone just threw up on your shoes. But New York is where I am, and short of miracle New York is where I stay, with temperatures in the 80s and humidity in the 90s and me in my late 30s wondering what the hell happened to my life. A couple of years ago I had a career and a salary, status and respect and a sense of purpose. Now I’m working nights in a shitty club in the East Village for minimum wage.”

Dan’s night as a security guard goes south very fast and he is fired from the club for essentially doing his job and not backing down.
He is desperate for money and out of desperation, despite all kinds of warning bells, he takes a job to protect the “secretary” of the rich guy. For this he needs to take this secretary out of town, on a road trip, you see, which pays very well. Oh, he is well aware of the danger and the possibility of not being told a complete truth about the guy, or any truth really, but he takes the job anyway.

The story is not really a mystery, or at least I did not feel it was too mysterious – Dan suspects right away that his temporary employers are not good guys, and he also realizes very fast that Stirling (the name under which young male secretary first appears in the story) is probably lying to him. And he turns out to be right. There are couple of twists in how that unfolds (his employers being bad guys and Stirling lying to Dan), but there was no real burning question about to who the bad guys were, if that makes sense. I definitely think the story qualifies as action/suspense. But although I would characterize the book as erotica with romantic elements and a happy ending (for me it definitely qualified as HFN at least), these two characterizations were not quite reconciled with each other.

What I am trying to say is that as an erotic novel with romantic elements this book deserves five stars – we have a lot of explicit, hot sex, and at the same time the writer manages to make me believe that despite all the sex with other people, Dan is indeed falling in love with Stirling and they may even have something together. It was very well done. The action/suspense was also well done, except when they were not having all the sex. I know it sounds weird, and I actually think that the writer tried really hard to make sure the sex encounters advanced the story and characterization. Often he succeeded, for example, they are not having sex when they are running from danger, only when they are resting, or whatever. But to make sure strangers won’t tell the police that they saw you, do you really have to have sex with them?

I guess because the writing was so very good I temporarily forgot that the book was erotica and I judged it by the laws of other genres, if that makes sense.
I really liked Dan. The guy was a survivor, giving years of service to the military that kicked him out for “Don’t ask don’t tell” because he couldn’t *not* tell when the guy he loved died from a sniper bullet, and now he is struggling to make ends meet. Some moments when he remembers Will hit me hard, like this one:

“The memory hit me in the guts like a punch, and the taillights of the car ahead got blurred. Shit? Was it raining? Must be. Can’t be tears.
Will – so beautiful, as he lay naked on the tacky bedspread of that cheap hotel in Kabul. Yes, seriously, Kabul. That’s where we went on our furlough. We didn’t want to waste time travelling, and we didn’t want to hang out with the guys. We found a place where the U.S. dollar would buy us a bit of privacy – a small room on a noisy street with dirty walls and a nylon bedspread, and in that miserable setting Will Laurence shone like a fucking diamond. His skin was smooth and brown, his body firm and warm, and he looked at me as I stood over him, one hand behind his head, the other playing with his balls, and he said, “Fuck me Dan. Fuck me”.
Tonight that warm, brown body lies in a cold cemetery in Knoxville, Tenessee, mourned by family and friends. Not me. No,sir. Not invited to the funeral. They probably never knew I existed. Why should they? After all, what did it amount to? Furtive fucks on military bases, a couple of nights in a Kabul fleapit, a lot of implausible bullshit spoken under the stars by perimeter fences.
A sniper’s bullet put an end to that.”

And then we get to watch him realizing that he actually started to care for somebody else (while having all the sex) ?.

“A couple of weeks ago, I’d have sat down and despaired. Who cares if I live or die? The sooner I’m off the face of this godforsaken earth, the better. Forget it all, the grief and disappointment and join Will. Not that I believe in the afterlife or anything like that, but at least we’d have something in common. We’d both be dead.
Now, in the White Mountains with corrupt cops at our heels, with a freaked-out hustler who may quite possibly have been telling me a pack of lies for the last few days, I wanted to live. Now that odds were really against me, all that left was my training. And what’s the prime objective? Survive.
Thanks, Uncle Sam. You took everything I had to give, you chewed me up and spat me out and now here I am with a man in my arms, and I am damn well going to protect him and serve him. We’ll make it to a place of safety and we will get justice. Bring on the New Hampshire police, bring on the helicopters, the dogs, the fucking grizzly bears, I’ll take ‘em all, and I will fucking win”.

P.S. As I discovered since writing this review, most or all of James Lear’s books are on Scribd.

→ Sirius
Previous article: REVIEW: Carry the Ocean by Heidi Cullinan
Next Post: REVIEW: Bound to the Bachelor by Sarah Mayberry