REVIEW: Bound to the Bachelor by Sarah Mayberry 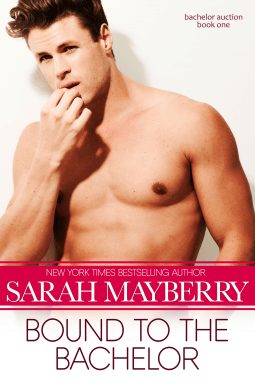 Your date with Marietta local Beau Bennett includes a day on the slopes at Big Sky Resort, complete with a sumptuous meal in the Resort’s fanciest fine dining restaurant and door-to-door transport. Dig deep to secure the attentions of one of Montana’s most eligible – and elusive – bachelors.

Lily Taylor knows Beau Bennett dislikes her, but that won’t stop her from asking him to volunteer for the Bachelor Auction she’s organized to help her friend Molly provide for her tragically injured son, Josh. If Beau’s gorgeous face, piercing blue eyes and chiseled body inspires the women of Marietta to dig into their pockets for a good cause, then Lily will do whatever it takes to secure his participation.

Beau Bennett isn’t sure how he wound up on the auction block being eyed up by hundreds of eager women, but he knows who to blame for it – Lily Taylor, the sexy, distracting, off-limits best friend of his kid sister. As far as he’s concerned, the sooner this nightmare is over, the better.

The last thing either of them expects is for Lily to wind up bidding on – and winning – Beau, or that their date will lead to Beau stepping in to save Lily when her past comes back to haunt her. As Beau does his best to keep Lily safe, they discover that maybe they don’t dislike each other quite as much as they thought.

In fact, maybe it’s just the opposite…

After starting this series bass ackward, I’m going back and filling in the gaps. Lily was one of my favorite characters in the final novella, so I was eager to see what you’d do with her story.

As with the Hardy entry this one starts off with a concept recap that explains the reason behind the bachelor auction as Lily strong arms yet another reluctant man into signing up to help out a local in need. Lily and Beau have had a thing – or a not thing – going for five years wherein they ignore each other because of what they think are bad vibes but which we romance readers know is code for “there’s going to be a meltdown when they finally get together.”

I already knew there were Dark Issues in Lily’s past and sure enough those are fleshed out here filling us in on why she fled home as a teenager, eventually supported herself as a stripper and is willing to bid 10K on Beau at the auction. The pricey date that results is a chance for Lily and Beau to lay their cards on the table as to why each has avoided the other. “Mutual-fiery-dangerous lust” that’s why. I appreciate that Beau is as caught up in the avalanche of it as Lily instead of just winding her up while remaining outwardly calm.

What brings them together again is germane to Lily’s past and Beau’s Marine fighting skills. But please, there is no former Marine who would relish being described as “fit enough to be a Navy SEAL” and Beau would and does put Lily through Marine Boot camp instead of SEAL training.

So Beau and Lily finally give in to their “mutual-fiery-dangerous lust” and it’s off the charts. The relationship Beau’s sister/Lily’s friend has wanted for them begins budding and suddenly Beau has a traumatic issue from his past. Where did that come from? Oh well, it has little bearing on the story.

Soon it’s time for Lily to put Beau’s training into action – yay! that she has the wherewithal to do this and the strength to deal with what follows. This quickly leads to the “ILY’s” but then they were working on five years of pent up “mutual-fiery-dangerous lust.” B-

→ Jayne
Previous article: REVIEW: The Hardest Thing by James Lear
Next Post: Scribd: Shut Up and Take My Money