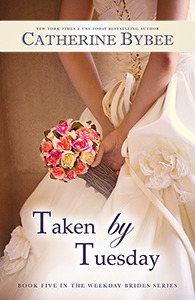 I’ve listened to two of your previous novels. One of them was Single by Saturday, the previous book in the Weekday Brides series.  That book introduced me to Judy Gardner  (the sister of that book’s hero) and Rick Evans, former marine and current security expert. The series is loosely based around the elite matchmaking business, Alliance.  Alliance specialises in finding “temporary” wives and husbands for people (although to date, it’s all been wives so far as I can tell).  For example, in the previous book, Michael Wolfe, famous actor and romantic lead, needed a temporary wife to throw people off the scent he was gay.  Karen, his temporary wife, fell in love with Zach Gardner (Michael’s brother – Wolfe is a stage name) just before the scheduled divorce and that threw a spanner in the works.  During the course of Single by Saturday, Judy and Rick were paired up in the Gardner’s hometown of Hilton, Utah, trying to locate a kidnapped teen.

Sparks flew even then, but Judy has big plans and Rick represents danger to her achievement of those plans.  Judy would be happy enough to get married and have children eventually, but she wants to have a career and doesn’t want to get trapped in a relationship that might cast her in the role of housewife.  To be fair – Rick doesn’t know any of this.  It’s just that where Judy grew up, she saw many of her friends give up their dreams and settle down in their tiny town and never leave,  and Judy is determined this won’t happen to her.  Basically, when she looks at Rick, she’s worried she’ll lose her mind and lose herself in him.

When Taken by Tuesday begins, Judy is just about to graduate from college with a dual degree in business and architecture.  Given that Michael will be throwing her a graduation bash,  Rick, his US security advisor, comes to town to scope out the arrangements required.  He’s been keeping an eye on Judy from afar in a not-really-stalker-y way and biding his time before asking her out, figuring that her senior year of college is not great timing for her.  After graduation, Judy takes up an internship in LA at an architectural firm and at least at the beginning, her and her BFF and fellow business graduate, Meg, will be staying in Michael’s Beverly Hills house.  LA is Rick’s home base and he decides it’s time to make his romantic move. Eventually, Judy agrees to go on a date with him.  I say eventually because Judy is reluctant – but only because of the thing I mentioned in the second paragraph.  Rick is a nice guy and doesn’t do anything inappropriate.

I don’t think readers need to have read the earlier books to understand what’s going on, but be aware that the previous couples all turn up in one capacity or another.  I didn’t find it annoying – if anything it made me interested in reading the earlier books.

To be honest, the book had kind of a meh start for me.  At about 50 pages in I was thinking that it was okay but not grabbing me and it was going to be maybe a C read.  But then things got interesting and the grabbing I’d been missing happened and I was pretty much hooked right up until the end of the book. This is a stalker book and some readers will nope out right there.  Me, I love a rescue trope and I don’t mind the woman-in-jeopardy storyline.  There is no sexual assault but there is violence to women in the book.  My impression was that it was enough to be chilling and to convince the reader of Judy’s genuine danger but it did not fall into graphic detail or torture porn territory.   What balances out (for me at least) the woman-in-jeopardy tale (generally and specifically, here) is where the woman takes an active role in her own rescue and that’s what Judy does.  When she is attacked, she works with Rick (and others) to try and identify the attacker and takes sensible steps to keep herself safe.  She doesn’t act in a TSTL way and she takes every opportunity to use her skills and save herself.    So, while there is a bit of the white knight riding to the rescue, it wasn’t done in a way that made the heroine a helpless victim.  And, in true Pretty Woman style, Judy “rescues him [Rick] right back” but other than to say it’s not the emotional rescue which is most common in this trope, I won’t give  away here exactly what kind of rescue she effects.

The story did take a while to get going but I definitely think it’s worth bearing with. Once Rick and Judy get to that first date, the pacing picks up exponentially.   The writing style is engaging and reminded me, in flavour, of Virginia Kantra or Nora Roberts (maybe something like her Chesapeake Bay series).  I suppose in hindsight Rick’s and Judy’s relationship moves too fast and I would have liked a little more of them being happy together without the pressure of a stalker but I never thought Judy’s fears of losing herself were going to come true.  Rick is clearly very happy to support Judy’s career ambitions and makes it plain he would never ask her (or want her) to give up her dreams.

There was one little thing near the end which bothered me.  It was just a little phrase – maybe I misunderstood it.  At one point, Judy is talking to her famous actor big brother, Michael.  (She doesn’t know he’s gay. Some people within the family know but not everyone and he’s certainly not publicly out.)  Judy is thinking that he is more like a “big sister” than a big brother.  Judy has big sisters but she is more comfortable talking to Michael about deep feelings.  I didn’t know what to make of that because Michael isn’t anyone’s sister.  I don’t know if that was some kind of weird allusion to gay men being effeminate?  If so, that’s all kinds of wrong.  But, like I say, maybe I misunderstood.  All I know is that it made me uncomfortable, it wasn’t necessary for the plot and I wish it hadn’t been there.

As far as the main couple are concerned, I did like Rick and Judy very much and I thought they were good together.  There was a little artistic license in the final scenes as regards the involvement of Rick’s security team vs. law enforcement but it didn’t strain my credulity beyond breaking point. Other than that, the law enforcement and medical aspects of the story felt well researched and authentic to me.

While I thought the setup portion of the story was a bit long, I did end up enjoying Taken by Tuesday quite a bit.   I’ll definitely watch out for future books from you and I do plan on picking up the earlier books in the series at some point. Grade: B.