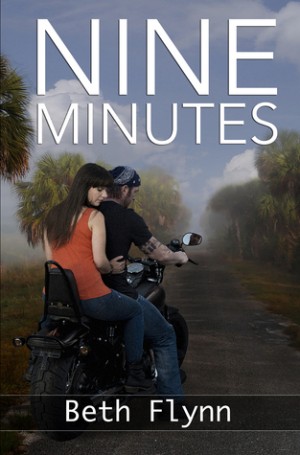 While it is not explicitly stated and I don’t see any acknowledgment of it, this appears to be a fictionalized version of “what happens next” after a true life abduction of Amy Billing that occurred in 1974. The similarities between the setup as well as when the story takes place are too closely aligned to be circumstantial. In 1974, Amy Billings disappeared. She was never seen from again. The general belief was that Ms. Billings was kidnapped by a roving motorcycle gang that she may or may not have befriended. She was a serious girl who played the guitar and read poetry.

In Nine Minutes, fifteen year old Ginny Lemon is kidnapped on the 15th day of May, 1975, but a motorcycle gang leader. She left behind an indifferent mother, her guitar, and her life. Ginny narrates most of the story for us except for a couple scenes toward the end and it opens with the abductor’s execution. [FN1] It reads almost like a transcript of a Discovery Channel investigative report.

I’ve seen others recommend this book as a romance. I don’t view it as one. Yes, there is a love story but it’s a story of a victim, her abductor, and a clear case of stockholm syndrome. Ginny’s a somewhat unreliable narrator in that she eventually believes that she is in love with her abductor and suggestions otherwise imperil her friendships because it is necessary for her to love Grizz, her captor, in order to find peace and happiness. Ginny explains time and again that the only way she can deal with Grizz’ life of criminal activity is to pretend it doesn’t exist. Therefore, her abduction doesn’t exist either.

Sam not only became a social worker, but he went on to become a psychologist. Years later, after learning I’d actually been kidnapped by Grizz, he went on to write a book about Stockholm syndrome—the syndrome where the captive starts to care for her captor.

The girl in his book was eerily similar to me. I’d stayed friends with Sam over the years, and that book almost ruined our relationship.

There are some, maybe unintentional, parallels to Lolita except the narrator in Lolita the narcissistic Humbert Humbert. He envisions the twelve year old girl he abducts as having sexual agency and power over him through his obsessive need. She does not, of course, as she is his prisoner. But in Nine Minutes, because you read from Ginny’s point of view, you want her to be happy and in her imprisonment, happiness comes from not being raped, beaten, or killed.

Grizz, the leader of a small biker gang, becomes obssessed with Ginny which leads to her abduction. She’s brought to a ramshackle roadside motel on the edge of the Everglades and there she becomes an unwilling part of his gang. Early on she realizes that she either does what Grizz tells her to do or she will suffer the consequences. What are those consequences?

She showed no emotion as she stared back at me. I was lost. I was alone. This little would-be friend was not a friend. She was doing her job. She opened her mouth slightly as if to say something. Finally, maybe an answer. A word of comfort. Anything. It was then that I noticed Moe didn’t have a tongue.

The downside of obssessive love is on full display. Grizz’s obsession leads to her abduction. If she even so much as looks at another man sideways, his life is imperiled. She cannot complain about someone making her unhappy or else Grizz will enact retribution on her behalf . She begins to modify her behavior in small ways and large ones in order to protect herself and others.

Ginny explains to the reader that she was the perfect person for Grizz to abduct. She came from a home where she experienced very little love and Grizz showered his attention on her. Emotionally bereft at the age of fifteen, scared and alone, Grizz was the only steady and loving thing in her life.

There is one area of disbelief, a certain sanitization, and that is that Ginny is never raped. The idealism that is sold in this story is that Grizz would never hurt Ginny and indeed there is even an author’s note that the author’s husband is the model of sorts for Grizz [FN2] He goes so far as to ask another member to drug Ginny and rape her with a billy club in order to rid Ginny of her virginity. He doesn’t want to hurt her even in that way. This sort of behavior makes it palatable for the reader to buy into the Grizz and Ginny relationship, no matter how unrealistic it is in this violent and lawless environment that an obsessed Grizz would allow Ginny to go untouched for years as well as never forcing himself on her. Indeed, he instead uses another woman callously to make Ginny jealous enough to approach him for sex.

I wish that there’d been some acknowledgment by Ginny, as she tells the story, that she had sex with Grizz to cement a position of security within the gang and to protect herself from Grizz. The tender and sweet nature of Grizz toward Ginny is a real discordant note within the story. That she was never victimized by him other than the abduction makes this often gritty storyline too romanticized and I felt that in many other ways, the gang aspects were not glorified.

Grizz is not a good man and Ginny describes several incidences of shocking brutality at his hands. At one point, she tries to intervene in the mistreatment (and that’s a mild word for what is happening on the page) and Grizz responds by ending the torture with a killing because killing means no more pain. That’s not what Ginny wanted which makes her learn another lesson about making requests.

The sex scenes are almost entirely closed door except in the case of her initial sexual encounter with the other gang member. By not making the scenes explicit, I felt it reduced the glamorization of the gang activity and highlighted the other aspects of the story more.

This is a hard book to grade. It was very compelling but there were areas that were too perfect and took away from the conflicted morality of the story. There were several points in the story where I was surprised and it has a rather large twist at the end. I didn’t find the book to be a romance and it seemed, at times, like this was a denunciation of the obsessive love of one person for another. I’m giving it a B because I couldn’t stop reading, the world building was great (I really felt the time and place of the story), and Ginny’s characterization was true from the beginning to the end.

There are disturbing aspects such as the character of Grizz as heroic. He wasn’t in any way. Ginny choose to remain with him, time and again, despite knowing that he was engaged in horrific activities. She becomes complicit in those activities as well.

FN 1 There’s a preview for the next book at the end and I have to say that part of my pleasure in the book is eaten away by the preview. In much of the story Ginny was a pawn and it was toward the end I felt she was gaining her own agency. If that’s stripped away, if she truly is just a pawn between two men, it would diminish much of my pleasure in the story although it wouldn’t take away from the writing.

FN2 “Grizz’s love and protection of Ginny is based on how Jim has treated me every day during our thirty year marriage.”