REVIEW: A Matter of When by Eden Winters

SiriusB- Reviewscontemporary mm romance / rock starsComments Off on REVIEW: A Matter of When by Eden Winters 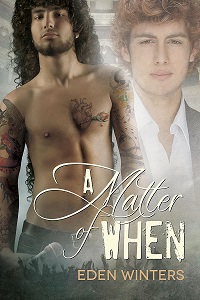 Wealth. Fame. Gold record. Hookers and Cocaine front man Henri Lafontaine has it all… including a control freak manager, band members who smile as they sharpen blades for his back, and last but damn well not least, a fan out to steal his heart. Literally. Trying to write hit songs and plan a comeback in the midst of the hi-fi white noise of LA feels more like watching his world implode, until he’s offered a month in the Colorado Rockies for vocal coaching.
Sebastian Unger’s rich, classically trained tenor inspires wicked thoughts. More than a pretty choir boy, he cracks the whip without hesitation to drive tattooed bad-boy Henri to give his all to his music. Working, fighting, and finally establishing a fragile peace, they find inspiration and perhaps more in each other. But the clock is ticking. Time will pull Henri back to the grit and gold of LA’s mean streets and fame machine, while Sebastian must return to the opera circuit, where a mysterious man known as “the patron” holds far too much sway. Only the trust they’ve built on a handful of notes bridges their two worlds… and shields them from malice.

I am usually indifferent about rock stars being featured in my romances, mostly because the first thought that comes to mind when I think about rock stars is heavy partying, drugs and alcohol and nothing else. I know that this is an unfair thought, which is most likely an influence of tabloids (which I do not even look at that often because *boring*) and probably has nothing to do with reality. However I am still bored almost every time a book with a rock star presents itself. I have nothing against partying but I want to see these people working, creating their music and in the romances I have read I do not remember seeing that. I missed your writing though so I decided to give this book a try and I am very pleased that I did.

We meet singer Henri Lafontaine at a time when he is mightily sick of the life he has been leading – sick of the people surrounding him, of the fan, who might have killed him by slipping something in his drink and god knows what he would have planned afterwards. Henry is also sick of his controlling manager, and his possible brush with death finally gives him the strength to break away from the life he is leading. He checks himself into rehab again, leaves his band and his manager and decides to get a fresh start.

His next step, along with the rehab, is to find himself a new manager and Henry strikes gold with Lucas. The first thing Lucas suggests is for Henri to go and spend a month with his friend’s son. The son is an opera star who can give Henri voice coaching lessons, which could help in reinventing his career. Skeptical as he is, Henri agrees and that’s how he meets Sebastian.

“Lucas returned three days later. “I have just the place. I know someone I’d like you to spend time with, though his style of music is vastly different from yours. If you don’t mind my saying, vocally, you need a bit of discipline. You’ve never taken the first voice lesson, have you?”

Voice lessons? Really? A bit late for vocal training. “I’ve got a gold album. What do I need with voice lessons?”
“The man who thinks he knows everything is a fool.” Lucas displayed no smirk, no smugness, merely a matter-of-factness Henri couldn’t deny. Damn the man for being right.”

I have to say that Henri pleasantly surprised me in some ways. I thought that it took real strength of character to attempt to change his life that much even if it took a life or death event to get him to that point. Henri and Sebastian did not get off on the best foot when they first met. I felt that they had to get through the initial annoyance they felt towards each other, based on their different musical styles and seemingly different attitudes towards music, but I did not feel that any serious fighting ever took place. Of course there was an attraction they tried to fight as well, so maybe that counts as fighting.

Where the book surprised me in a good way was at the moment when Henri leaves Sebastian’s house. I made an assumption, and that’s solely on me, that Henri would leave Sebastian when it was time for a mandatory separation closer to the end of the book. However, Henri leaves when the story is at around the halfway -mark on my kindle, and he leaves not because he wants to leave Sebastian; instead, he is fully intending to come back and maintain some kind of the relationship. Henri leaves to try and reenergize his career and to pick his new band members. I actually got some of what I wanted in a rock star book – I got to read about the creative process, and some of the descriptions of the music his potential band mates played were really beautiful in my opinion.

“Good thing no flies buzzed around the garage. Lucas might have caught one or two with his wide-open mouth. Whatever he planned to say never came out. Tessa launched in a doom-da-doom-doom, rendering thoughts of anything but her music futile. Again, she never banged, never pounded. Instead she brought the instrument to life in a way Giles never had. Holy shit was she ever good. What she lacked in experience she more than made up with style. Henri’s mouth joined Lucas’s in hanging open. Just when he thought the impromptu concert couldn’t get any better, she spun around, tapping on the garbage can lid in a sweet calypso cadence. Damn, but that part would fit right into a song Henri’d been working on.”

Henri does not forget about Sebastian at all and tries to maintain communication with him, but Sebastian has his own problems to deal with. The blurb mentions his mysterious “patron” and I will just say that to call this man controlling would be an understatement of the century – as you can probably guess he was abusive to Sebastian. I feel the need to mention it because abuse can be a triggering topic for some readers. We mostly see the consequences of the abuse though – the process of abuse is not shown. Some twists and turns of this story, including the reasons why Sebastian became involved with the “patron”, felt over the top to me. I hate to sound evasive, but I cannot exactly reveal what sounded over the top – NOT abuse itself, just the circumstances in Sebastian’s early life prior to when it started. It felt a little soap opera like, but a story about famous musicians is probably a good one to include soap opera like plot twists if one wants them in the first place.

I feel like I have been talking mostly about Henri, because the story is primarily from his POV (third person limited, but we are in Henri’s head) and not a whole lot about Sebastian. I really liked that the reader also gets to see in his persona a passionate man who wants to be successful in his career as an opera singer and who is willing to devote a lot of extra time and energy to work on his goals. I also liked that he was willing to become a vocal coach for other singers to help them reach their goal to be better singers. I always enjoy when the heroes in my romances are not just defined by their love life, but by what else they want in life as well.

I did like Sebastian and Henri together, I also thought that their early separation achieved the effect of making their romance more slow burn than it may have been time wise. Of course I could not help but wish they would meet when Sebastian was free of his “patron” and could have been more ready for the relationship, but that would have been a completely different story than the one on page here.

I enjoyed the female characters in this story. I especially liked the trick the author pulled on me by making me think that Henri’s manager in the beginning of the story is one of those evil caricature types. I was pleased that she got some layers by the time the story was done.

→ Sirius
Previous article: REVIEW: Straight from the Heart by Kimberly Gardner
Next Post: Reading List by Sunita for October and November