“Sadie Hutchins loves her job at the Kentucky Tourism Commission. She loves finding the unusual sites, hidden gems, and just-plain-odd tourist attractions of her home state. She’s a shoo-in for the director’s job when her boss retires at the end of the year…until hotshot Josh Vaughn shows up to challenge her for the position. Josh is all sophisticated polish while Sadie’s country comfort, and the two have very different ideas of what makes a good campaign. So when their boss pits them against each other in a winner-takes-all contest, they’re both willing to fight dirty if it means getting what they want. But it turns out, what Josh and Sadie want could be each other—and Josh’s kisses are the best Kentucky attraction Sadie’s found yet!”

What a cute little book. And I’m not just saying that because I lived in the heart of the Bluegrass horse country for years during my obligatory horse mad stage – and if you’re horse mad, then living surrounded by Kentucky horse farms is the best place to be. It also made me a UK fan for life. I’d wanted to try another of your books ever since I’d loved “And One Last Thing” (and I did notice the tiny shout out to it in this book) so when Jane featured this one as a Daily Deal, I jumped on it. 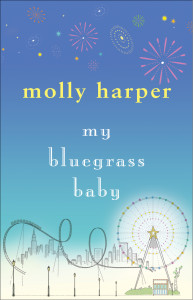 Sadie likes quirky rather than is quirky which slightly subverts the Chick Lit style book heroine. She’s not above getting even with Josh nor is he too high minded to keep from trying to play with her mind – though I was also glad to see her outgoing boss call them both in for a Come to Jesus Meeting about it. Thankfully her assistant also reigns her in and she agrees with it and this is over. Though the book has Chick Lit aspects, I wouldn’t say it truly fits the genre. Yes, it’s first person but Sadie loves her job and is good at it, doesn’t go all prat-fallish around the Josh, and lives in a cute little duplex rather than a grotty bedsit.

The conflict between the two isn’t too outlandish – competition for a job that they are well qualified for and current employee vs “who you know” are well established ways of getting a job. I like the fact that despite a rocky start, they can act (eventually) maturely and work well together as professionals. The field trips and promos that their office staff go on sound like a blast too though I’ll skip the historical accurate corsetry. And that the way the conflict is resolved says something for how much Josh feels for Sadie and how honorable a person he is. He doesn’t want her dreams compromised but does need a bit of space to process. Totally okay with me.

The book finishes with a great job acceptance and proposal (?) scene.

“What changed your mind?”

“Thanks,” I scoffed, trying to pull away from him to smack him or something, but he just held me tighter. “You’re sure you really want to work for me? It’s not exactly running your own firm. I don’t want to make you give up your dream.”

“Dreams can change, especially when you had them for the wrong reasons,” he said. “Besides, what good would it do, running my own firm, when I wouldn’t be able to take the team with me? I’d have secretaries who could make nonchewable coffee, interns without distinct personality disorders. Where’s the fun? I want to be with you. I want to work with you and watch you achieve these bizarre, wonderful visions of yours.”

I love a hero who can appreciate his heroine’s bizarre, wonderfulness. For me this is a short, sweet little book that reminds me how much I miss Kentucky and looks to be the start of a fun new series. B