I bought this directly after finishing Flesh and was totally thrilled to be immersed in your evocative post apocalyptic world once again.  While the two main characters in this book had a more developed romance, I was still stymied by the heroine’s passivity. I hope in future books we see women who are more skilled at taking care of themselves and less too stupid to live. 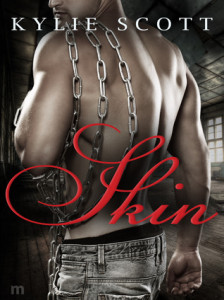 Skin picks up about 100 days after Flesh with a surprising lead. Nick was kicked out of the compound and left to fend for himself because he was suspected of being in cahoots with the evil leader who wanted to just take the women for himself. Nick’s biggest sin was not speaking up and therefore being branded a bad guy. Because of his military training, Nick has created a haven for himself in an eco-chalet complete with composting toilets and water in tanks that lined each building. He has created a fortress of safety and has rummaged for plenty of food stuffs and clothing. In post apocalyptic terms, he’s loaded.

The only thing that Nick does not have is a woman. He’s been scouting around and fixates on Roslyn Stewart, a librarian at Lowood College. He offers a van full of supplies in exchange for Roslyn and the surviving members holed up at the college agree to trade her for the goods.

Nick apparently believes that his status as a good provider will be sufficient for Rosyln but Roslyn does not want to be his captive playmate. This is the early source of the tension and conflict and while I appreciated that Roslyn did not want to trade her body for safety, I do wish she went about it more wisely. Despite having an Army man for a father, Roslyn has almost zero survival skills. She can’t even climb a tree and when Nick tries to teach her, she’s surprisingly truculent.

When she proclaims she wants to return to her college, Nick (and I) look at her askance. Those people traded her for a van full of goods.

“This isn’t going to work, Nick,” she said. “You’re not going to convince me of a damn thing.”

The woman made no sense. After everything she’d seen, the blinkers were still firmly in place.

“You really want to go back to that place and those people?” he asked. “After what they did to you?”

Her top lip curled in distaste. “After what you forced them to do to me.”

“I didn’t force them to do jack-shit. They chose to screw you over with their own free will.”

He grunted, frustrated but trying to hide it. Probably unsuccessfully. “You like them enough to spend the rest of your life with them? Not that you’ll live long with bastards like them at your back. Especially once you have to start going on raids into town for supplies. How do you think that’ll work out, Ros?”

The line between her brow deepened and her shoulders squared. “I don’t know, Nick. But it sure would be nice if the choice of how and where I spend the rest of my life were mine to make.”

Yes, Roslyn is right. She is in a terrible situation. Betrayed by her friends and placed in captivity by a man she doesn’t know who clearly wants to play Adam and Eve with her. But if you are going to put a female in a position that she needs to escape, I wish she had some ability to fend for herself. Instead, every time that Roslyn tried leaving, she did such a poor job of it that I almost wanted Nick to give up on her and feed her to the zombies himself.

At some point Roslyn becomes more palatable to me, even if she never learns to care for herself, because Nick likes her and I like Nick. I know Nick’s the hero and he’s not going to hurt or force Roslyn so it’s hard for me to see everything from her perspective. Other readers might not have such a difficult time with Roslyn.

They both undergo a change. Nick realizes his past mistakes included not speaking up and later has an opportunity to act differently. Roslyn learns a little more restraint.

And other than trading for Roslyn like she’s some blanket (I know this is bad you guys!), Nick is a really decent man. If I had to be caught in a zombie apocalypse, a guy who found an eco chalet with a working toilet and a seemingly endless supply of water would be my first choice. And when Roslyn isn’t trying to escape in a stupid fashion (let me make this clear here, it’s not that I didn’t think she should try to escape, but that she should do it with some skills. LIKE PUT SOME EFFING SOCKS ON FIRST), their interplay is fun to read:

“I was laughing at myself.”

The woman tucked her chin in, drawing back from his wandering mouth. “Why?”

“You know, I’ve met two-year-olds who ask fewer questions than you.”

She digested this information with a slow nod. No smartass comment was made.

“We could get married,” he suggested with a smile.

“We are not getting married. Don’t be stupid.” Her scowl deepened.

The story does a great job of balancing romance and suspense. I was never once bored throughout the book and I felt a lot of sympathy for the two. The post apocalyptic world was presented as harrowing. Every day was made dangerous just by exiting a house. The survivors that you did meet were often only there to kill you and take your goods. Banding together was a nice idea but the small communities needed a strong leader and suspicion ran rife throughout groups.

A little more information (although not much) was conveyed about the disease but the story primarily focuses on the here and now. How will people survive? Are the zombies dying or mutating into something terrible. Are there other dangerous side effects to the disease? What happens next? I want all of these questions answered. While Roslyn is never going to be my favorite heroine, this series is completely engaging. I love the dialogue, the suspense, the well integrated sexiness and even the romance. I had to give this book a B because I don’t like post apoc books and after I read it, sadly realized I had only on tiny Kylie Scott novella left, I went in search of more post apoc books.  Apparently I do like them. I just need to find the ones written by authors whose voices work for me. B-