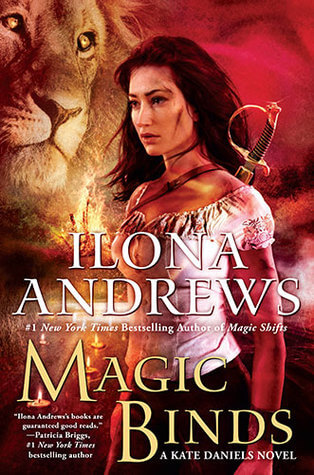 I won’t spoil this book, but it is impossible to review it without giving away major plot points from previous books in the series.

Magic Binds will not make a lot of sense to readers unless they’ve read the earlier eight Kate Daniels books. Don’t start here.

Magic Binds has been on my eagerly anticipated list all year.  Book nine in the Kate Daniels urban fantasy series (which will be completed after the end of the next book), Magic Binds progresses the story arc of the coming battle between Kate and her father, Roland.

Kate and Curran are two weeks away from their wedding. When the book begins, they ask Roman, the black volhv –  priest of God of Evil, Chernobog, to officiate the ceremony. Much of the humour of this book comes from Roman’s somewhat unexpected (but hilarious) enthusiasm for his role. He takes it upon himself to be the couple’s de facto wedding planner – Roman knows a lot about planning a wedding. One would almost think he’s been hoping for this moment for years and years. (I wonder if he has a ring binder full of wedding brochures in his closet?)

The humour is a welcome relief from the heavy aspects of the story. A final resolution to the thorny issue of Roland v Kate is coming and Roland continues to antagonise his daughter, most recently by kidnapping Saiman. If Kate does nothing to rescue Saiman, Roland can kidnap her citizens at will and that’s not acceptable. However, the alternative seems to be provoking a war she is not ready to win.

Kate’s magical abilities have increased since the events of Magic Breaks, but she is still not strong enough to best Roland. When the Witch Oracle tells her that if she goes ahead and marries Curran, the final battle is only weeks away and will result in the death of her beloved, things are looking decidedly grim. That kind of makes it sound like the problem can be solved by not marrying Curran but that is never really on the table (thankfully). No, if Curran doesn’t die in a battle soon, the battle will be in about a year and will result in the death of their son instead. Kate is between a rock and a hard place. It seems Atlanta is destined to burn and she will lose all the people that matter most to her.

The “wild card” is Kate herself. The Witch Oracle doesn’t see Kate during her visions of the coming battle and this suggests that Kate can somehow change the future – something which is almost-but-not-quite fixed.

3.      Retire from the land-claiming business.

I was so down with this plan. If only I had some way to implement it.

While I’m on the topic of changing the near-certain future, I’ll add that I didn’t entirely understand the concept of “anchors”. It was too subtle for me. What I did understand is that there are certain things which, if they occur (or don’t occur as the case may be) will make the near-certain further either more or less certain. That’s fine as far as it goes, but I didn’t always understand the significance of the anchors to the overall story – that is, the battle with Roland. I felt like there had to be some significance, otherwise, these things were random and, at least for the first one, there to have a cool battle scene rather than anything else. I’m not good with subtle though so perhaps I missed something. Also, there was a paradox later on in the book where Kate actively had to provoke the event she was trying to prevent. I admit I puzzled over that for a while. To be fair, there was some acknowledgement in the book itself about this conundrum, albeit there didn’t appear to be an answer.

During the time Kate is coming up with a workable plan with at least a hope of success, she is also battling the effect that claiming Atlanta had on her. When she uses her magic, she feels herself drawn into an abyss of inhuman power-hunger; she finds herself in danger of becoming just like Roland. This aspect was the most fascinating in the story for me. As the saying goes, power corrupts and absolute power corrupts absolutely. The more powerful Kate becomes, the more she is tempted to pursue power for its own sake. While she recognises that this would make her not Kate anymore, it is nevertheless a battle. The force trying to draw her in the the abyss is tricksy and suggests all sorts of good reasons why Kate ought to disregard pesky little things like self-determination for others. Of course, in order to defeat Roland, she has to become more powerful. It’s not an option for her to just walk away.

Kate gets help from unexpected sources. I’m not entirely sure how I felt about this – If I had read this book directly after reading all the books in the series in a glom, would I find the character consistent or not? Because I didn’t (glom the entire series at once), there was enough ambiguity for me to give it a pass however. For now at least.

I was pleased that the Kate/Curran romance returned to its previous heat level. I thought the more explicit sex in Magic Shifts was a little jarring.

I also liked the balance between Kate doing things on her own and Kate doing things as part of a team – sometimes that was the Kate/Curran team and other times it included characters such as Derek, Julie, Ascanio (he’s still a favourite of mine) and Christopher.  Speaking of Christopher, things I wasn’t expecting at all happened with him. Talk about coming out of left field. I’m not sure if my complete surprise about this was because I didn’t pick up on earlier clues or if there were no earlier clues. I freely admit I’m not good with subtle though, so I’m prepared to accept I just missed it.

I was disappointed that the djinn box didn’t feature more strongly in Magic Binds, particularly after the tantalising ending of the previous book. It felt like a lot of build up but then… nothing.

That said, I blazed through this book, reading it in only two evenings. It certainly held my attention and entertained me. The snappy banter between Kate and… well, everyone kept me engrossed and the action was nearly nonstop. However, like in Magic Breaks, the ending [ETA: the ending in terms of the conflict with Roland] was anticlimactic. Partly this was always going to happen – the Roland v Kate story will finish in book 10. Book nine was going to get us closer to it but there is no final resolution here. Narratively, it created a lot of tension but it kind of fizzled at the end because of that lack of resolution. The first Kate Daniels books had a looming battle with Roland as the main story arc of the series, but each book told of a particular conflict in which Kate and her crew eventually prevailed. Even Magic Shifts did that – Eduardo was rescued. But in Magic Binds, the conflict is entirely with Roland and, while progress is made, the story is not done.  That said, the stakes are certainly raised very high by the end of Magic Binds.

Kate Daniels is still one of my favourite series’ even if Magic Binds perhaps not the strongest instalment. From a romance perspective (and let’s face it, that’s a perspective I’m always going to have) there are some sweet and charming “awww” moments. Plus, there’s a wedding. What’s not to love about a wedding?