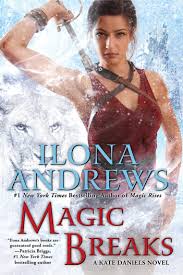 SPOILER WARNING – Because Magic Breaks is Book 7 in the Kate Daniels series, there are unavoidable series spoilers found within this review. I’d also highly encourage readers new to the series to begin at the start of the series.  Below are links to Dear Author reviews of all previous books.

I’m what we’ll call a “late bloomer” to your Kate Daniels series. I bought the first in the series, Magic Bites, when it first came out, but tried it and didn’t like it. But over and over when casting about Twitter asking for a great series to read, other trusted readers would recommend the Kate Daniels series.  When I confessed that I couldn’t get into the first book, Mandi from Smexybooks encouraged me to just skip it and start with book 2. About a month ago, I did, and it began a week-long glom of the highest order. I consumed all six books in the series within that span, barely stopping to eat, sleep or work. To no one’s surprise, Mandi was right. The series features a fantastic heroine, a dandy hero and more than that, a fully realized world that features fantastic creatures, court intrigue and power struggles galore — what’s not to love??

In Magic Breaks you bring a resolution an overarching storyline that has been strongly featured the entire series: the impending confrontation between Kate Daniels (our heroine) and her father, Roland, an ancient wizard who is more powerful than any other creature on Earth.

Kate and her mate, the Beast Lord, Curran, are looking forward to some alone time. First, Curran needs to travel for a short time to negotiate with a silver miner who he knows is selling to Kate’s father and mortal enemy, Roland. He’s promised Kate two weeks away from the Pack as soon as he returns from his visit with the miner. In the meantime, as Curran’s mate and alpha of the Pack, and overseer of all pack alphas in Atlanta, Kate will have to handle the dreaded Conclave with with People (Atlanta’s undead). Kate agrees to attend Conclave and hopes to get in and out without incident so she and Curran can get away. To her dismay, her father’s second in command, Hugh d’Ambray shows up at Conclave with the dead body of one of the two local leaders of the People in tow. He accuses the Pack of murder and demands that the killer be handed over to the People for retribution.

Kate determines that she and a designated team from the Pack will have to go to speak with one of the Rats’ spies who watches the Casino (the People’s stronghold). They set out through Unicorn Way, a place where magic never dies and is particularly unpredictable. Once Kate and her group has discovered the details of the killing, and apprehended the killer, she must devise a way to avoid turning the killer over to the People. During her double cross of the People, she is kidnapped by Hugh d’Ambray and teleported to Mishmar, along with Ghastek, the remaining of the two vampire leaders, who she’s had a cautious working relationship with. On top of that, during the kidnap, Kate’s most prized possession, her sword Slayer, is broken. Now Kate is in a real pickle. She’s in a bottomless pit of water, with Ghastek, a broken sword and no way out. She knows that Curran will come for her, she just has to stay alive while she waits.

I’m hesitant to say too much more about the plot, as it’s truly exciting and I think the best of the series, in terms of developments that will move the upcoming books forward. It also provides what I felt like was a very credible partial resolution to the Roland issue while also setting up intriguing new possibilities for the series.

There are so many things to like about this series. Kate is an incredibly strong heroine, one who reminds me very much of Mercedes Thompson from Patricia Briggs’ Mercy Thompson series. She’s self-sufficient, smart, more powerful than she knows, and bears the weight of responsibility incredibly well. The series as a whole offers a truly wonderful romance between Kate and Curran, who also carries the weight of responsibility heavily. This books features Kate growing more and more comfortable with her power and also introduces some exciting new dynamics within the city of Atlanta on all sides.  Generally speaking, I’m not a fan of urban fantasy, and while this probably falls more into the UF genre than paranormal romance, I find Kate and Curran’s romance to be satisfying enough as a romance reader to always want more. The writing itself is very tight and the worldbuilding is stupendous.

While the book does have at the beginning a brilliant “journal entry” by Barabas, one of Kate’s trusted advisers, which summarizes the plot and the positioning of the various groups within the world, I’d highly encourage readers to start at the beginning of the series (or book 2, as I did). It’s among the best written UF/PNR books I’ve read in ages, and from now on the series will be a much coveted and often re-read one. I can’t wait to see what happens next. Magic Breaks gets an A, and a highly Recommended Read from me.

→ Kati
Previous article: Who gets the power when we’re rewriting myths?
Next Post: Daily Deals: Erotica novels, mercenaries, aliens, and a bad publisher