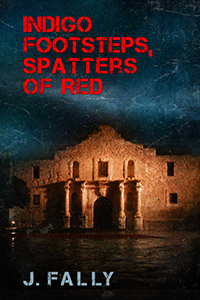 At first glance, Carter Cross and Josh Lessard seem like an ordinary couple. They make love and fight, know each other’s strengths and weaknesses, deal with the “in-laws,” and share their life and home. They even work together. One day, they’ll probably die together – possibly a lot sooner than they’d prefer, given their profession as members of a paramilitary special unit formed to thwart a gory apocalypse. While Carter and Josh are used to cheating death on a daily basis, this time the odds are stacked against them. Between a deadly mission to complete and Josh’s grandma coming for a visit, it’ll take a miracle to get them out as horror invades not only a major city but also their home.

Right after I have read “Bone rider” I went searching for any indication that you were planning to write another book – any book. I did not find much, but I did remember you mentioning in one Good reads interview that you were writing a short story about Carter and Josh and that possibly, maybe you would write more novelettes about these men. If this is still holds true, I cannot wait for more stories, if not, I think this short story/novelette (length is listed as 45 pages) stands alone very well.

I practically stopped reading m/m short stories because I was tired of finishing a story and thinking something along the lines of: I need more character development, I need a less abrupt ending, and why oh why does this read as an outline of the long work…again. But after “Bone rider,” if you were to write a medical prescription, I would have said that I will give it a try and I am happy that I gave this story a chance.

Carter and Josh are a couple, and the story starts with a funny domestic scene showing them fighting over what color to paint their living room.

“VIOLET.” Carter stared at the can of paint on the floor, clearly doubtful. “You’re going to paint our living room violet.”
Josh, undaunted, tossed him a brush. “No, dickhead. We are going to paint our living room violet. Unless you want to do it in green instead, but the only green they had was this weird pea-soup shade, so I do not recommend it.”
“What’s wrong with white?”
“I don’t know.” Josh shrugged and went for the paint can with a screwdriver. This was going to end badly, Carter could tell but he made no move to intervene yet. He did not put down the brush, though. Just in case. He might have to move fast to prevent total disaster. “Don’t know, don’t care,” Josh elaborated, distracted as he tried to figure out where to apply his lever. “Memere wants gay bliss, Memere will get gay bliss. Gay people like color; we are painting the walls. Can’t be that hard.”
“Who says gay people have to like color? I’m gay. I like white. It’s neutral. It’s a non-color. You can paint over any stains and nobody will ever notice.” It also made for a very pretty contrast when he put his dark hand on Josh’s winter-white ass, but this was not the time to get distracted. A horrible suspicion reared its ugly head.
“Wait. Did you go on the Internet again? Did you google?“

***
“Josh. How many cans of paint did you buy? How many fucking colors did you buy?”
The handsome face half-buried in the crook of Carter’s shoulder nudged a bit closer, the first hints of an afternoon scruff scratching lightly against his throat. “Dunno. How many colors are in the rainbow?”
Christ on cracker”

I think readers will see easily that Carter and Josh are deeply in love, but we also see and hear mentions that their professions are very dangerous. At about the fifteen percent mark of the story they are called to participate in a mission – we do not know the details right away, but we know that they will have to neutralize a mob. We learn a little later just how very dangerous this mob of the paranormal variety is and how many of those missions Carter and Josh and their team have done in the past and will do in the future. The story becomes a heroic action/adventure at this point and I loved how seamlessly domestic bliss was transformed into something else, but I wonder if some readers may dislike the change of focus.

“They were, after all, only playing at being civilians. It was an indulgence, a gift for a couple of soldiers likely to die young and horribly. They could’ve asked for a mansion if they’d wanted one, and they’d have gotten it…private airstrip in their backyard included.”
Except I did not feel that the focus ever changed completely – even though the action sequences are given every attention they deserve, we never stop seeing just how very much these two men are in love and how even amongst the darkest horror they try to keep each other safe while doing their job.

Josh and Carter come back from this mission alive, and the last part of the story again shows them in their home and dealing with Josh’s relatives. But I would argue that now both aspects of their lives are shown to be intertwined together, and the fragility of their happiness is something that made me choke up a little. Heck, I cried over their dead comrades and I only had known those characters for several sentences. I thought the overall pacing of the story – the excitement of the adventure and the domestic banter switching up was done very well.