REVIEW: The House of the Four Winds by Mercedes Lackey and James Mallory 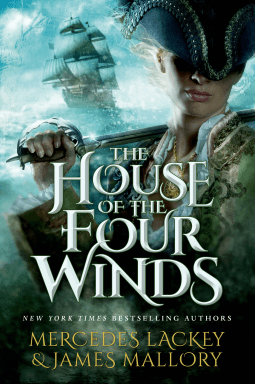 The rulers of tiny, impoverished Swansgaard have twelve daughters and one son. While the prince’s future is assured, his twelve sisters must find their own fortunes.

Disguising herself as Clarence, a sailor, Princess Clarice intends to work her way to the New World. When the crew rebels, Clarice/Clarence, an expert with rapier and dagger, sides with the handsome navigator, Dominick, and kills the cruel captain.

Dominick leads the now-outlawed crew in search of treasure in the secret pirate haven known as The House of Four Winds. They encounter the sorceress Shamal, who claims Dominick for her own—but Clarice has fallen hard for Dominick and won’t give him up without a fight.

Full of swashbuckling adventure, buoyant magic, and irrepressible charm, The House of the Four Winds is a lighthearted fantasy romp by a pair of bestselling writers.

When I read the blurb for this book at Netgalley, I had high hopes for it. A princess who is an expert swordswoman, pirates, treasure, true love and what I hoped, based on the cover, would be a story filled with swashbuckling adventure. The elements were there but the execution wasn’t what I’d hoped for. The story is slow, the magic is lacking and the romance is almost non-existent. By the end, I just wanted it over.

The first chapter is slow, leisurely and packed with backstory. We discover how poor little Swansgaard has 12 princesses and one crown prince and can’t hope to pay out that many dowries without breaking the bank so the princesses will have to make their own way in life. I was slightly miffed that 12 girls will get booted out so that sonny boy won’t be poor. It’s a set up that left a bitter taste in my mouth but I kept going in the hope that the eldest would be off to a life of grand adventure.

Months later, Clarice decides to head to the new world, which except for some barely changed names sounds much like North and South America. Long and tedious detail describes how she chooses a ship and begins to learn about life on board. If a reader doesn’t know much about sailing ships, this information can be handy but for someone who does, it’s slow going. Frankly the first chapter is a little boring.

But then in chapter two, finally things start to come together and the pace picks up a bit. Things happen, there’s a little swordplay and my interest revived only for the action to slow again. This is more the thinking person’s adventure as at the half way point and slightly beyond, I frankly couldn’t say there’s much “rousing adventure.”

Instead, Dominick and Clarice have to think their way through their problems – why did the captain act the way he did? Where was he going to take the ship and why? And now that they’re there, what lies ahead and how do they anticipate danger and deal with it? At this point, Clarice truly comes in handy with her lifelong training in politics, statesmanship and reading a situation to gain the advantage. But since they’re up against magic, ultimately all this means little.

Ah, the magic. It gets explained more than once but I still never truly “got it.” The most magic that appeared was wielded by the villain and it became more eeevil villainy that just is because it’s there rather than anything that makes much sense. Even the villain’s evil quest is never satisfactorily explained. It just all goes to pieces in the end and something, I’m still not sure what, happens and it’s over. Huh, okay then.

Despite the fact that this is mainly a fantasy novel, there’s still the romance, right? Only Clarice’s is the only point of view in the story and she loves Dominick but he’s utterly clueless about her true gender and identity for most of the story so all that we get is her unrequited feelings up until suddenly he’s in love with her to break a spell. Well, I felt cheated.

The pirates don’t save the story either as they are little but props for the evil villain. The pirate haven is a beautiful but dismal spot, as we learn but it hardly seems to matter as that is left behind too.

The story limps along to an end and it’s then that I realize that there are lots of loose ends left. Since this is, I believe, supposed to be the start of a series, I have to believe that this might be to leave issues to be resolved later. I, however, am not willing to read the next eleven books to find out. D

→ Jayne
Previous article: REVIEW: The Suffragette Scandal by Courtney Milan
Next Post: After the Bell Tolls For Thee — What Happens After you Die?