REVIEW: His Kind of Woman by Nona Raines

“When Roy Girard went looking for Victor Varrano, he never expected a woman to answer the door. He soon discovers that Victor is now Venetia. Roy’s startled, but even more surprised by his attraction to her. As they spend time together, he doesn’t want to let her go. But she’s sure to dump him when she learns his secret.

Venetia’s falling hard and fast for Roy. But when she learns that his brother was the bully who tormented her in high school, she’s shattered. She can’t wrap her head around the fact that the man who made such amazing love to her could so completely betray her trust.”

When Loose-Id sent us a list of titles for possible review, I picked this one out. Why? Because it features a transgender character. Yep, that was all it took. Readers have gently chided us for the dearth of LBTQ reviews at Dear Author and I decided this year to try and remedy that. 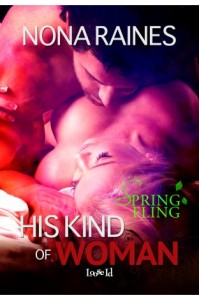 This is a novella with a lot of ground to cover. Some things are already established and some need to be worked out. Venetia has already undergone her GRS and finally feels that her body matches who she’s always known she is. Roy used to be the bully his half brother also was but before his death, Travis had come out as Gay causing Roy to examine his own feelings towards those who might not fit into heteronormativity.

But just the mention of her former name brings back hurtful, old memories to Venetia and when Roy discovers she’s a transgender woman, his confusion over his initial attraction to someone he thought was a hot woman makes him step back. Their relationship continues only because of Venetia’s curiosity about why Roy was seeking her out and his desire to fulfill his dead brother’s wish to apologize to Venetia. I like that their feelings move from attraction-but-not-acting-on-it, through friendship and then to sex. By the time they’re in bed, I can believe that it means something to them both.

“Sex had never been important before. There’d been women, sure, but an over-the-road trucker’s life was hard on relationships. Too much time apart. Easier just to settle for casual hookups. It was hi, how ya doin’, it’s on, see ya around.
He’d never been in love before.”

The humor is a plus too.

“He lifted her in his arms and carried her down the hall. But since he didn’t know where her bedroom was, he almost deposited her in the bathroom. Okay, maybe he wasn’t Don Juan.”

And what Roy’s wearing – or soon to be not wearing – made me think of the wonderful blues song, “Meet Me with Your Black Drawers On.”

The sexing is hot and specific to their situation as Venetia calms her worry about size with the knowledge that she’s been faithfully using her dilator but wait! there’s still more conflict to deal with. Venetia’s reaction to the news that Roy – this man she’s just let make love to her – is the brother of the bully who made her life a misery is dead on. She wants Roy out of her house and her life. Roy’s anger that Venetia is dissing Travis without hearing the circumstances – this is his brother after all – also makes sense.

Not until one of Venetia’s friends – yes! she’s a woman with friends and a full social life and is a well rounded character – reminds her that people can change does Venetia decide to offer Roy another chance to prove himself. She lets him into a bit more of her life and what’s important to her – the LGBTQ group of teens she mentors. Roy picks the perfect Sam Cooke song to dance to in order to tell her – and the people who also care about her – how he really feels.

I was happy that this isn’t a Gay Utopia, though, as shown by a coulda been awful encounter Venetia has in a bar and the fact that she felt the town needed a place where LGBTQ teens could feel accepted. With all these positives, why the B grade? The section where Roy delves via the internet into what transgender means came across to me as slightly preachy and stilted. Still I think a lot of issues are covered here and done well. B

→ Jayne
Previous article: REVIEW: On the Edge by Ilona Andrews
Next Post: Four Things Barnes & Noble Could Do to Stay Competitive