The concept of this book was pretty fascinating. Officer Addy Dawson is in the process of evacuating two mountain bikers from the a forest fire in the Klamath National Forest. She believes she strikes a hiker with her SUV and gets out to investigate. Someone runs off with her SUV, the fire has caught up with her, but she is hoping to get saved by the aircraft she sees hovering above her. Only when she radios in her location they tell her that there is no aircraft. 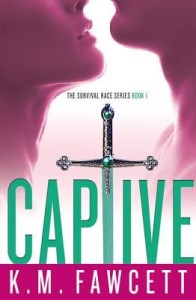 She passes out only to awake in a small room with a naked man who calls himself Max. Max explains she has been taken by Hyboreans, humanoid herbivores (based on their teeth) at least ten feet tall with dense fur over their entire body. They spoke and controlled things telepathically. Addy was captured to breed with Max, the reigning human champion.

For fifteen years, Max has been kept in captivity, either serving as stud or fighting for his life. All he knows now is fighting or sex and he is afraid that he can’t move beyond that. Another human character in the book, a younger competitor, serves as a juxtaposition to Max to show the reader how Max really has held on to his humanity.

Addy is both smart and dumb at the same time. She is shown using her skills as a forest cop by being observant of her surroundings, taking in the information and processing it. But she’s shown as dumb when she wants to escape with zero knowledge of the planet; how she will escape; and what she will need to escape.

The romance suffers a bit because Addy believes that Max did something terrible to her.  But when the explanation finally comes out Addy realizes that Max might be her only hope.  There are several humans in the book who help to explain both who her current owner is and why she should assimilate into life as a pet.  I liked that concept (it reminds me of the Porno for Pyros song “We’d Make Great Pets”).  Max fears that he is too controlled by his impulses and that either he doesn’t deserve Addy or he won’t be able to control himself from turning into a beast.

Without spoiling too much of the book, the best part of the story was the suspense feature. Addy learns that there may be a haven on the planet. Can she get there in time to avoid being raped by the evil human? Will she just decide that being a pet for life would be an acceptable way to exist? The penultimate scenes were full of exciting action sequences although it did seem a bit implausible in parts.

The worldbuilding needed a little work. Max, for all his 15 years of captivity, still spoke a lot of colloquial English. The Hyboreans had amazing capabilities such as the ability to bring a human back to life, multiple times. Why these creatures enjoyed humans so much wasn’t really explained well. Humans could be bought and sold but they seemed to be kept exclusively to breed males to fight in the Survival Races. Was that solely on this part of the planet or others?

I also felt the ending was a little too open ended for me given the circumstances. I’d be interested in reading more about Max and Addy. C+