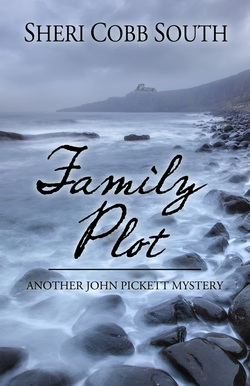 The third installment of the John Pickett series finds Bow Street Runner Pickett in Scotland investigating a woman found unconscious on the beach–a woman who bears a striking resemblance to the local laird’s daughter, a girl missing and presumed dead for the last fifteen years. Pickett is surprised to discover that the woman was found by none other than Lady Fieldhurst and her three young nephews–and gratified to learn that her ladyshp has registered at the seaside inn as Mrs. Julia Pickett. When old Angus Kirkbride dies only hours after announcing his intention of changing his will in his daughter’s favor, “Mr. and Mrs. Pickett” must join forces to discover the truth about a family reunion suddenly turned deadly.

Ah, at last the next novel in the John Pickett series. It’s been a while since “In Milady’s Chamber” and “A Dead Bore” were released but even so I managed to pick up the relationships again with little effort. Newcomers might want to read an excerpt or reviews of the first two books to get their feet under them but in all honesty I’m not sure even that is needed as there are little nuggets of the backstory included here that are sufficient to get things going.

The story is as much about the mystery to be solved as it is about the various relationships of the characters. Julia and her in-laws, Julia and John, John and Mr. Colquhoun, Julia’s nephews and their new status in life …. all comingled. There’s a nice balance between the two different plot threads with some wry humor and views of lower class aspirations and middle class morality and charity.

Poor Bow Street Runner John is still desperately and, he thinks, hopelessly in love with aristocratic widow Lady Julia as the story starts. But does Julia reveal some hidden feelings when she initiates a meeting between them? Her stuffy in-laws certainly think so. These are two lovelorn people who truly are separated – at least as far as Society is concerned – by rank and class. In England of the day, this is the Berlin Wall.

Julia has enough sense and circumspection to not kick up a fuss but to wait until after leaving London before starting her rebellion against those who want to rein her in. And even then it’s the situation her eldest nephew finds himself in and his desire to escape it that tips the scales. Julia is a woman on the verge of breaking out of the social conventions her in-laws want to constrict her with. She’s not quite there but she’s stretching her wings, bit by bit and getting ready to launch herself.

Of course her choice of John Pickett’s name for her alias raises all kinds of opportunities for speculation, especially on the part of Mr. Colquhoun, as to why she chose that particular surname.

I am enjoying the relationship between Colquhoun and John. It’s more that of a mentor with a touch of friendship as well then strictly boss/employee. The magistrate doesn’t hesitate to use a light sarcasm when the “muddle that is to be” at the Scottish inn comes to light. He “marvels aloud” in apparent astonishment at the twists and turns John unloads on him and I get this wonderful visual of his “amazed and surprised” face. Facing him on the bench must be a theatrical delight.

We soon see evidence of John’s professionalism and eye to detail as he begins to examine the scene of Elspeth’s discovery, asking sharp questions and requesting Julia to sketch the scene – something she, as a woman of Quality, would have had training in. Meanwhile she devises a clever strategem that will allow John to do more detective work even as she continues to question the woman.

John might not be a gentleman, but he does know the manners due a woman, of any station, and doesn’t hesitate to sail into action when the occasion requires. His mind and talent for teasing out evidence and putting clues together is as sharp as ever and proves the interest and time Mr. Calquhoun spent on him.

Woven through the book is an interesting sideline of Julia thinking on her position as a widow and about when she would ever be free of obligations to the Bertram family, free to do as she wished and not to worry about living up to anyone’s expectations. Her brilliant marriage and elevation in status had never been as easy as she had dreamed it would be. Could these be hints of rebellion to come?

Fans and readers of the series have no doubt been wondering if will we ever see a blossoming and resolution of the romance. One is obviously there even if both are fighting it and won’t acknowledge it. John’s comment on their kiss, “In all honesty, it was the highlight of my existence,” is breathtaking and as powerful as any consumated scene.

Elspeth Kirkbride comes up trumps in her ability to handle calf love and swings reader sympathy to her after almost an entire book of having her motives questioned. Elspeth is a canny cookie. As she explains to John Pickett, she had a plan and either way she would come out ahead. I can actually find it in my heart to at least understand what she did and applaud her forward thinking.

After watching John begin to put together all the clues I was disappointed at the exponential explanations. Oh, dear. just when things were going well but at least the murderer is not megalomanically dramatic. In fact, the murderer is quite calm and matter of fact – by far the most frightening type of villain IMO.

Julia, bless her, is pluck to the backbone and ready to put up a fight when the time comes. She also has at least a rough idea of how to be sure justice will be served.

In the end, all’s well that ends well – to borrow a title from Shakespeare whose other play started the whole business. Everyone sees sense about public explanations – the gentry do get to arrange things as best suits them – and twue love triumphs.

But what of Julia and John? My what a twist at the end and yet, given how many historical romances I’ve read it shouldn’t have been a surprise. Now I shall be riveted to the next installment and there had better be an next installment as I shall riot if denied closure on this. Just saying. B