I’ve enjoyed your recent historical romances very much, so when I saw you would be writing a new series set in a steampunk world based on China during the era of the Boxer Rebellion, I requested a copy for review. 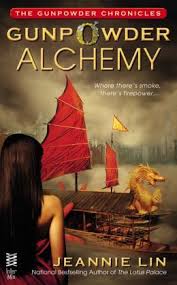 The heroine and narrator of Gunpowder Alchemy is Jin Soling, a young woman who at age eighteen is responsible for her small household. Soling lives with her widowed mother, an opium addict, with her eight year old brother Tian, as well as a maid, Nan, in a small village.

Soling’s family wasn’t always what it’s now become. Her father, when he was still alive, led the Ministry of Science in its attempt to create a gunpowder engine. The family lived in Peking, and Soling’s mother was almost a different person, bright and alert instead of living in an opium trance.

But when Soling was ten and her brother a baby, the English invaded, and the Ministry of Science wasn’t yet ready with weapons to fight them off. Soling’s father delivered the bad news to the Emperor, and for this he was executed. His friends in the ministry of science scattered to the winds, including Chen Chang-Wei, the young man to whom her father had betrothed Soling. The family, still grieving, left Peking behind.

Now Soling works for the village physician, though such work is considered inappropriate for a woman. Her meager earnings supplement the money she makes by selling her father’s unusual inventions.

It is on a trip to sell her father’s last mechanical device, a kind of puzzle box, in the nearby city of Changsha, that Soling is captured by Inspector Aguda, a government official, who takes her on a journey to the port city of Canton, where Soling is brought before the Emperor’s son.

It turns out that Crown Prince Yizhu is determined to defeat the English at their own game. He recognizes that Soling’s father was right when he warned the Emperor that only through developing better technology could China win.

The prince and his scientists have tried to replicate the formula for gunpowder fuel which Soling’s father and the men working for him devised, but they have been unsuccessful. They believe that one of her father’s scientists, Yang Hanzhu, possesses the formula, but he disappeared with it after Soling’s father was executed and has since become lawless. The prince’s men believe he is dangerous.

The prince orders Soling to seek out Yang and acquire the gunpowder formula. Such a task is fraught with danger but Soling asks that her family name be restored and her mother and brother allowed to return to Peking is she succeeds.

Before she departs, Soling encounters Chen Chang-Wei, the man to whom her father once betrothed her when they were both quite young. Chang-Wei proves to be solicitous and concerned for Soling’s safety. He equips her with a bladed fan with which to defend herself and promises to get a message to her family.

Then Soling leaves for the streets of Canton. Soon she meets a boy who invites her to run after him, in a chase that causes her to lose the escorts Inspector Aguda provided for her, takes her aboard a ship, and brings her face to face with Yang Hanzhu.

But Yang won’t give up the gunpowder formula. Instead he takes Soling out to sea aboard his ship, and reveals to her that he believes Chen Chang-Wei isn’t to be trusted, that some of the opium shipments the English have brought to China are tainted and far more addictive than other opium. Though Soling wants to return to her family, she soon becomes absorbed in Yang’s alchemical work with opium samples.

Is the gunpowder formula the key to defeating the English, or is the key a cure for opium addiction? Is it Chen Chang Wei who is destined to win Soling’s heart, or Yang Hanzhu? Will Soling ever return to her family, and if so, will she still be the same young woman who left her home?

Gunpowder Alchemy has good qualities but when I picked it up I expected something different. I thought this would be a steampunk romance, in the same genre as Meljean Brook’s Iron Seas series and other steampunk romances, when the book is really a steampunk adventure story with romantic elements.

I had difficulty switching gears (no pun intended!) and therefore the first half, which focuses on Soling’s adventures rather than on a romantic relationship, was a frustrating reading experience.

It wasn’t until the second half that it became clear to me who Soling’s love interest would be for the rest of the book. The romance between this man and Soling became much more pronounced in the second half, and from this point on, as lovely as I’ve come to expect from you. More on that later.

The adventure part of the story was less successful for me. This was partly due to my wrong genre expectations, and partly because in the first half of the book, Soling’s heart wasn’t in her adventures. I didn’t feel she was filled with determination to attain the gunpowder formula and restore her family’s name. Instead it seemed all she wanted was to get back to her mother and brother and be reunited with them.

Soling’s early adventures read more like things that befell her than things she tackled head on; she wasn’t actively going after what she passionately wanted, but was being used for other people’s goals instead. That made it harder to enjoy those events. But around the midpoint of the novel Soling’s actions align with her goals, and that made the journey she undertook from then on more compelling than the earlier parts of the book.

I liked Soling—she was a beautifully drawn character, honorable, caring, and responsible. This last interfered a bit with the book’s coming-of-age aspect. Though only eighteen, she didn’t have much growing up to do on her journey—she was already shouldering a heavy burden of responsibilities when she first left home.

The man with whom Soling was eventually matched was a wonderful character but I don’t want to spoil his identity for readers. He and Soling were very well-matched and made for a great pairing. Their developing feelings for each other were the strongest aspect of the novel.

My favorite among the secondary characters was Tian, Soling’s eight-year-old brother. Tian was a solemn, intelligent boy who had inherited his father’s talents but wasn’t given the education to develop them. Even so, he managed to invent something that was helpful.

The worldbuilding was mostly good, with the invasion by the English and the brewing rebellion in the countryside depicted alongside gunpowder engines, bladed fans, and other inventions.

The one aspect of the inventions that didn’t work well was the quickness with which the characters were able to come up with them. Complicated devices were designed from scratch, built, tested, modified and then put to use without a hitch, all in the space of a few days, sometimes when the resources at hand were scarce. This wasn’t always believable.

The characters were divided between those loyal to the Emperor, those who rebelled because they saw him as unjust, and Soling, who was caught in the middle. While I wanted the side Soling ended up on to win so that she would survive, the fantasy reader in me wanted another reason to root for one side or the other. I wanted Soling to be emotionally invested in the outcome of the rebellion for her country so that the stakes would be higher than just personal ones. Perhaps that is something that is coming in book two.

I wanted more of an emotional scene between Soling and her mother as well, but since this book is only the first part of Soling’s story, that may also be something which will come later on.

It’s hard to know what to grade Gunpowder Alchemy. My enjoyment was around a C or C+ but the cover and the blurb accurately convey what the novel is about. It was the names of the author, the publisher, and the editor, and perhaps also wishful thinking, that made me expect a steampunk romance rather than an adventure story with romantic elements set in a steampunk world, so I can’t hold the book responsible for that. My best guess is that the right grade is a C+/B-.