What Janine is Reading: Two Books

This novella launched Martha Wells’s Murderbot Diaries series. These books have been raved about both here and at other review sites, my social media feeds, and by one of my real life friends. I’m late to the party but I finally picked it up. 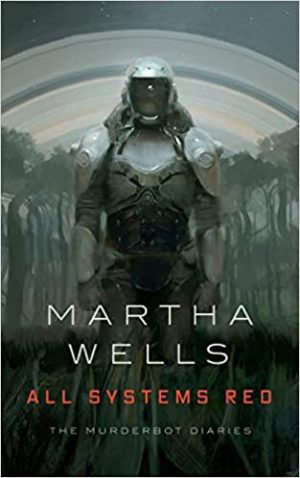 The narrator, an android “SecUnit,” has dubbed themself Murderbot. Their job is to defend and protect their leasers (Murderbot is owned by a mega-corporation referred to as “the Company”). Although the human members of the planetary research team currently leasing Murderbot don’t know it, Murderbot has hacked themself and is, to a degree, free to do as they please (consuming soap opera episodes is high on the agenda). But there’s a wrinkle: Murderbot can’t let anyone know they now have free will. If the humans learn of it and tell, Murderbot will be reprogrammed.

Murderbot and the team they are guarding are on a mission that goes bad when a crater reveals itself to be the lair of a giant killer worm and one of the team members is injured and nearly dies. As the team looks into it further, it becomes evident that their data was compromised so as to lead them to think the crater was safe. Someone has it in for the team, and it is the Murderbot’s job to defend the people they refer to as “my humans.” But how can Murderbot find out who the killer it, or even who they (Murderbot) are, without being found out themself?

This was a sweet novella, but I think my expectations may have been too high due to all the buzz. Murderbot was a lovable character and I liked most of the humans working on the team. Some of the best aspects of the story were the interpersonal dynamics, with Murderbot trying to figure out how to relate to the team and the team trying to work out how to relate to Murderbot. I liked the way Murderbot’s character developed with each interaction and how their relationships with the others shifted as a result. The ending was clever and I loved it.

The mystery plot was suspenseful but ultimately not 100% there because—

All Systems Red was also… I don’t want to say slight because it was just a novella. It was not slight for a novella at all, but I have also read novellas with more substance. This goes back to my high expectations. But it’s still looking like it will be a good series. B/B+.

Last year I reviewed Jade City by Fonda Lee, an #ownvoices fantasy novel set in a fantastical world somewhat like 1970s Hong Kong. The book featured a conflict between two clans (in the book’s world clans resemble mob organizations) over jade, a substance that can give those who wear it supernatural, wuxia-like fighting abilities. 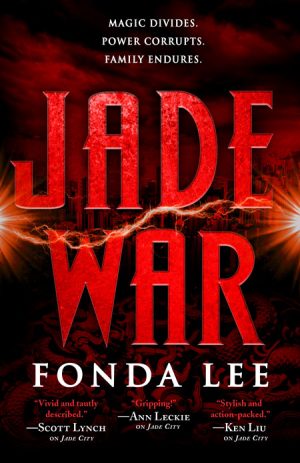 Jade City was an excellent book and I gave it an A-. If you are interested in reading it, you may wish to read no further in this review because I’m about to unload massive SPOILERS for that book.

Of five members of the Kaul family (leaders of the No Peak clan) we met in Jade City, only three remain. Patriarch Kaul Sen passed away in old age and Kaul Lan, the clan’s former leader (and my favorite character in Jade City), was murdered. Teenager (and Kaul siblings’ semi-adopted younger brother) Anden has retreated into a kind of self-exile in fear of employing his deadly fighting abilities. The only Kauls remaining in the city of Janloon are siblings Hilo and Shae, and Hilo’s stone-eye (unaffected by Jade) wife, Wen.

The war with Ayt Mada and the Mountain clan still rages. Eventually a cease fire is agreed on, but that just drives the war into Janloon’s dark underbelly. Hilo and Ayt both know that neither of them can rest easy until the other is buried and so they both fight on different fronts.

Shae embroils the No Peak clan in an alliance with the Espenians, foreigners who covet jade. Hilo sends Anden to Espenia, where he will not be executed by the enemy for his powerful jade abilities. Maik Kehn, Wen’s brother and Hilo’s Horn (a chief of security / enforcer) seeks out Lan’s assassin as well as smugglers who trade in illicit jade. Without Hilo’s knowledge, Wen cultivates a spy network, and by transporting the jade that has no effect on her, makes her jade disability into a secret power. Hilo negotiates pitfall after pitfall as he strives to lead No Peak well and gain it the upper hand.

I’m still not that fond of Shae; she makes some genuinely senseless decisions in this book that land her in trouble with the media and with Hilo, and her rationalization for the last and most dangerous of these is illogical.

Anden I can take or leave; I have sympathy for him but I always find myself wishing he would develop more gumption.

Wen is an admirable character—exactly the kind of wife Hilo needs and I loved that she didn’t let his wishes to the contrary stop her from contributing to the war effort. In one memorable scene she is quick on her feet and makes smart choices to get herself to safety.

Maik Kehn also grows and develops and I liked him too.

With this book, though, it was Hilo who grabbed my heart. I want to dislike his arc—indeed, it’s the kind of arc I have frequently disliked in other books and in television shows. I never watched Breaking Bad because the idea of someone who starts out as a pretty good human being turning into a worse and worse person seemed like something that I’d hate. I love redemption stories and this path is the direct opposite of redemption. It’s a descent into destructiveness.

And Hilo is heading from bad to worse. In this book he does things he would not have considered doing before the war broke out and he also, in the name of family, takes a couple of horrifying actions. I wanted to hate him for that but I couldn’t. He’s just too damn lovable.

I thought about why and here’s what I figured out. One, he loves his family to pieces. Two, he is loyal to the bone. Three, he is charismatic. Four, he suffers. Five, he works his ass off. Six, he is very, very good at what he does. And seven, he didn’t start out good at it at all. He was thrust into his role of clan leader when his beloved brother Lan was murdered and he has, with effort and against all odds, grown into someone who personifies the role.

It’s interesting to me that I now love Hilo because in the previous book I adored Lan, and Lan was everything Hilo isn’t. Lan’s moral compass was always pointed north and he did all he could to avert the war. He was a thinker and he devoted himself to nurturing other people’s successes. Hilo has his own code but it’s more brutal than Lan’s ever would have been. He thinks equally hard but it doesn’t come as naturally to him. He is just as devoted to the well-being of those he leads, but he shows it more through open affection than through careful thought. He’s more passionate in all his emotions than Lan is (the latter maybe another reason I love him so much).

Jade War is well-written but one of my biggest issues was that even though I love Hilo I feel that my love for him is wrong. He is a killer. In the first book I would not have called him (or Lan) a mob boss but in this one it’s impossible not to think of him as one.

Another big issue for me was that Jade War is so suspenseful that it was stressful to read. I read for relaxation. I like to turn the pages quickly but not to be on the edge of my seat with constant, unrelieved tension.

There was also a scene where Shae and her boyfriend, Maro, had sex and I think it was supposed to be hot, but there was a coarseness to the way it was written that didn’t work for me.

The book is an emotional rollercoaster and a master class on how to write an antihero readers will fall in love with. If you have any interest in antiheroes at all, read it. B/B+.