What Janine is Reading: Hathaways Edition

In the mid-2000s, Lisa Kleypas published a series of historical romances set in mid-Victorian England, featuring the eccentric Hathaway family, four unconventional sisters, their charming wastrel of a brother, who had unexpectedly inherited a viscountcy, and the surly Romany man their parents all but adopted. I read none of the five books at the time they were published, but after picking up the series bundle on a deal, I caught up recently.

Mine Till Midnight by Lisa Kleypas

This book introduces the Hathaways while serving as oldest sister Amelia’s story. After the death of her parents, Amelia had to take over the responsible, maternal role in the family, and her worries include Leo’s self-destructiveness in the wake of his fiancée’s death, Win’s frailty after surviving scarlet fever, Merripen’s unrequited love for Win, preparing sisters Poppy and Beatrix for entrée to society, and youngest sister Beatrix’s compulsion to take things that don’t belong to her. 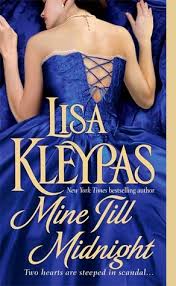 With all these worries and more, it’s a good thing Amelia meets Cam Rohan early in the novel, while retrieving Leo from a gaming club. Cam is as laid back as Amelia is stressed out, and their free spirit / worrywart dynamic is appealing. When they meet again in Hampshire, where Leo’s estate is located, their unusual courtship takes off.

I enjoyed this book in a light kind of way; it was enjoyable to see Cam balance Amelia out and help her shoulder her worries. I liked the ghost story element, too; it was effectively eerie.

One disaster after another befalls the Hathaways, but Cam helps Amelia navigate through all of them, and charms her to her toes in the process, too. Both characters are likable, Cam especially. There were some interesting details about his Romany background, and humor derived from his thwarted desire to be less prosperous. B/B+.

Seduce Me at Sunrise by Lisa Kleypas

I was less keen on book two in the series; in fact it’s possibly my least favorite. Merripen and Win’s past is detailed early on in the book, and was a “lite” version of Wuthering Heights. Merripen is taken in by the Hathaway parents as an almost feral teenager after experiencing a violent childhood among the Rom, but his instant connection to Win is what prompts him to stay with the Hathaways. 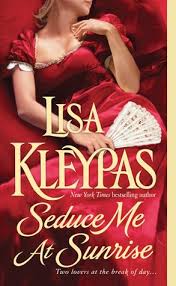 Merripen believes that he can never have frail Win and would only harm her if he tried, but when Win returns from a sojourn at a French clinic accompanied by her handsome doctor, determined to marry and have children of her own, will Merripen stand by or will he claim Win as his own?

I was more interested in Cam and Amelia’s secondary storyline here than in the main romance. While Merripen was an interesting character, he also struck me as the stereotypical “wild” boy turned surly man. He’s jealous, he scowls, and despite the occasional hot kiss or smoldering glance, there’s not much forward progress in his relationship with Win until the second half of the book.

Win, meanwhile, was so perfect that I found her boring. Other than her ethereal blond looks and former frailty, I didn’t understand what it was in her that inspired Merripen’s fierce devotion, and when she simply melts into his arms following a major conflict without letting him in on the anger and hurt he’d caused her, I lost some respect for her . C.

Tempt Me at Twilight by Lisa Kleypas

Poppy Hathaway wants nothing more than a conventional life, so when her suitor Michael’s love letter is stolen by Beatrix’s ferret, Poppy tries to retrieve it. This is how she meets Harry Rutledge, owner of the hotel where her family is staying. 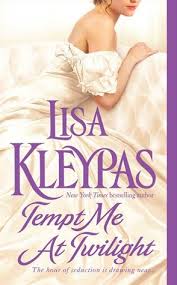 Poppy’s beauty isn’t what draws Harry; rather, it’s that she shares his interests and is charmed by the clockwork mechanisms that are his hobby. One conversation with Poppy and he is determined to marry her himself, Michael be damned.

Harry uses the purloined letter to break up Michael and Poppy and then ruins Poppy’s reputation. He is upfront with Poppy about being a villain and Poppy marries him for Michael’s sake, rather than his or her own. And yet, there’s something between them, something that won’t let either one of them go. Poppy doesn’t back down from her determination to build the kind of life she wants and needs, filled with warmth and caring for Harry’s hotel staff, and Harry, who has never been loved, finds himself craving the one thing he can’t have—Poppy’s affection.

I love a villain / hero but wished that Harry’s past had been dug into more, and that his staff’s devotion to him had been given more of a motive. What happened with Michael was predictable, but the book was nonetheless riveting and hugely enjoyable. Some readers, including Jane, didn’t understand when Harry fell for Poppy, but I felt it happened during their first meeting, and his claim that he didn’t care if Michael had her heart was just him deceiving himself, rationalizing that he’d be okay so he could undermine her romance with Michael.

Poppy was a great heroine and a foil for Harry. She had all that he was lacking, and her strength eventually forced him to learn to give more. I loved her determination to fulfill her needs for attachment and friendships, and the way she didn’t budge for Harry.

I also loved the symbolism with the clockwork and the way certain motifs, from Poppy’s fear of guns to Harry’s sleeplessness, repeated themselves in the story. The parallels between what happens to Harry late in the novel and what happened in his childhood could have been hit harder, but the ending, which some readers felt was unneeded, mostly worked for me. A-.

Married by Morning by Lisa Kleypas

There was much build up for the relationship between Leo Hathaway and his sisters’ governess, Catherine “Cat” Marks. Cat and Leo got off on the wrong foot from the moment they met, and sniped at each other for two books before getting together in this one. 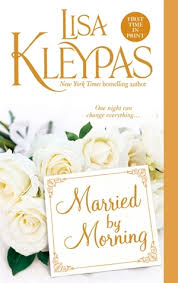 Things start changing between them when Leo discovers that Cat dyes her hair to disguise her appearance; clearly, there is someone in her past whom she’s hiding from. When Leo falls into a pit near some old ruins and Cat rescues him, a new bond is forged between them.

Cat’s past rears its ugly head, of course, but Leo is determined to marry her. But can he persuade Cat that he is exactly the husband she needs?

Leo and Cat’s relationship in the earlier books had been so caustic that it was hard for this book to overcome. I felt protective of Cat and wasn’t sure if Leo could be trusted with her, and his seduction of her did not instill further confidence.

Furthermore, the plot, especially in the second half of the novel, bordered on ridiculous, relying on insanity / irrationality to explain more than one villain’s behavior. Three separate characters acted outside their self-interest just to threaten Cat and prey on her fears.

At least, unlike Merripen and Win’s book, this one was not boring. There were some entertaining scenes such as the one in the pit, or the one when Leo bought Cat a new pair of glasses. The sex was mostly hot, with Leo taking a bossy role in bed, but I had problems with the final sex scene:

Cat was under the effects of opium, which acted as an aphrodisiac, and Leo “helped” her with it. While he made a point not to consummate the sex until she was no longer under the influence and could give consent, I didn’t understand why Leo felt that foreplay, on the other hand, was okay when she was still drugged.

My grade for this one is a C.

Love in the Afternoon by Lisa Kleypas

Animal-loving Beatrix Hathaway is considered an oddball, so much so that Christopher Phelan, Hampshire’s sought-after bachelor, says she’s suited to the stables. When Christopher ends up on the front lines of the Crimean War and writes to Beatrix’s friend, Prudence, whom he has been courting, Prudence has no intention of replying. But after reading his letter and sensing his need of a reply, Beatrix begs Prudence to allow Beatrix to write back in her stead. 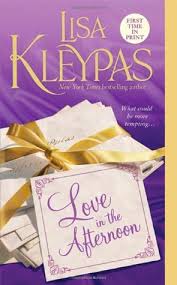 Having fallen in love with the girl with whose correspondence helped him survive the war, Christopher returns to England with PTSD. Not only that, the hidden depths revealed by Prudence’s letters are not in evidence, and Christopher is annoyed with himself for being drawn to Beatrix, Prudence’s odd friend. When he realizes Prudence isn’t the author of the letters, Christopher vows revenge. Will he recognize Beatrix, and his feelings for her, before he ties himself to Prudence irrevocably?

The correspondence at the beginning of this novel was deeply romantic, and Beatrix’s longing for the absent Christopher is beautifully portrayed. But once Christopher gets a glimmer of her deception, the novel lost much of its power. Christopher’s vengefulness was unappealing, and was dropped so abruptly that it’s hard to understand why it was introduced in the first place. His volatility and anger made him less compelling than the thoughtful correspondence had initially made him seem.

While I loved Beatrix, I agree with Jane’s comment in her 2010 review that in the novel’s second half, Beatrix turned into a Disney character, able to charm everyone but her rival Prudence. Beatrix’s almost-unwilling kleptomania was reintroduced early in the book, but then abruptly dropped. Still, I couldn’t help but love her, and I wasn’t entirely convinced that Christopher deserved her.

Christopher’s dog was a secondary character in the novel, and I adored his role in bringing Christopher and Beatrix together. Even so, I felt the epilogue, in which the canine gets a medal from Queen Victoria, was laying it on too thick. Nevertheless, this was a wholly entertaining book, one that I read much faster than the second and fourth book in the series. For that, and for the lovability of Beatrix, Love in the Afternoon gets a B-.