REVIEW: Love in the Afternoon by Lisa Kleypas

I’ve never fully understood the phrase “two sides of the same coin”, but my feelings toward Love in the Afternoon perhaps gives new meaning to the saying. This is two books in one which could be a boon except I liked the first book (the first half) far better than the second book (the second half). I'm reading this book and nodding along, loving it. Loving the drama, the agnst, the wait…what is this? Oh no, Beatrice is now Heidi. Or Snow White and all of the animals of the forest not only love her but come to her call. She appears to be able to gentle the most ferocious of beasts, namely alphaous maleous. 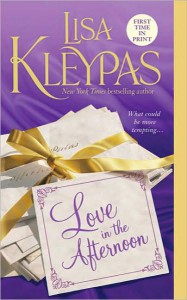 Now, I know that Beatrice is a woman of the forest from previous stories in the Hathaway series and I am not opposed to that storyline. It would be an outright lie to say that trope never appealed to me, lover that I am of Julie Garwood stories. And it’s fairly standard romance fare for the heroine to be a friend of the beasts. The problem was that the first half of the book was so out of the ordinary that when juxtaposed to the ordinary second half, the trope of tra la la-ing Snow White in the wilderness stood out starkly.

Let's acknowledge the superior in this book first. The letter writing is exemplary and I am a sucker for epistolary romances. It's hard to write letters that appear clever, touching and real without the exchanges becoming too banal. And yet you conveyed the horrors of war and the changing character of a once pleasure seeking dandy in just a few strokes of the pen. Mighty, indeed. Christopher Phelan was a lover of fine things and Beatrix Hathaway was not a fine thing. In fact, Beatrix overheard him saying to another person that she was a girl “more suited to the stables than the drawing room.”

Christopher joined the Hussars but was picked out to be one of the Rifle Brigade and goes off to fight in the Crimean War. War does thing to men and it remade Christopher into someone else. He writes to Prudence, a friend of Beatrix’s, and begs her for a letter in return. Prudence has no time for letter writing but acknowledges that Christopher did look splendid in his uniform. She fobs the letter off onto Beatrix and begs Beatrix to write Christopher, pretending to be Prudence. At first Beatrix refuses. Why would she want to correspond with a prig like Christopher but upon reading the letter, Beatrix realizes it cannot go unanswered. The sender is too hungry and too lonely to be ignored. And so Beatrix embarks on a Cyrano-like deception trading missives with Christopher that become increasingly romantic. The letters are so well crafted with Christopher swinging from one violent mood (I wouldn’t presume to ask you to wait for me) to another (wait for me…. I swear by the starlight . . . I will not leave this earth until you hear those words from me.)

As with any deception, this can only end badly. Christopher survives to return home and seek out…Prudence. After all, it is Prudence who has written to him. Prudence who had become his only hope in the darkest of nights. Prudence whose correspondence was the one good thing in his life for all those dreary months. And Prudence is all too willing to take credit for the letter writing, to be the love of a new hero of England, and to the newly minted heir to a wealthy estate when his eldest brother takes ill and passes away.

Beatrice, sworn to secrecy by Prudence, and believing that silence is the most correct thing hugs her love for Christopher close.

The rough velvet of his voice was a pleasure-stroke against her ears. Fascinated, bewildered, Beatrix stared at his guarded face.

To Christopher Phelan, she was a stranger. But the memories of his letters were between them, even if he wasn't aware of it.

When Christopher and Beatrix meet again, Christopher insults her, bringing up memories of his stinging criticism that she belonged in the stables.

This unrequited love was palpable particularly faced with Christopher’s mistaken disdain. I wanted to scoop Beatrix up, punch Christopher in the face, and pour red juice down the front of Prudence’s gown. All at the same time.

As the lies unravel, as they always do, the tension got even stronger. I was reading as fast as I could at this point. What could possibly happen next!?!

But once the lies resolved and Christopher and Beatrix were making a go of it, the book’s tension and drama dropped precipitously. Worse, I felt that Beatrix turned into the aforementioned Snow White character. She was able to heal not only Christopher’s PTSD, but also a fellow soldier’s PTSD and he turned into an able suitor for a friend of Bea’s. As one of my friends related to me, she expected Beatrix to break out in the Whistle While You Work song at any minute. (Said friend was “all kinds of sad” when it didn’t happen). Family acrimony that had existed for decades was resolved with a kind word here and an understanding message delivered there. Whatever poignancy existed in the first half was swept away with a gallon full of sugar. Even Christopher’s battered, ugly dog is rewarded in a spectacular fashion.

Christopher was never fully actualized. He didn’t ever apologize for his stable comment and while he came to love and appreciate Bea’s way with animals, I did expect some acknowledgment that prior to the war, he was a real asshole. I felt like Christopher hated the person he had become (due to PTSD) more than the person he was.

In the end, I thought the book was half Pixar and half Disney. The first part was Pixar with its poignant, delicate storytelling and the second half was pure Disney where everyone was happy, every problem was solved, every person was paired off, and even the dog is recognized. B

→ Jane
Previous article: REVIEW: I Now Pronounce You Someone Else by Erin McCahan
Next Post: Thursday Midday Links: The Year of the Digital Backlist