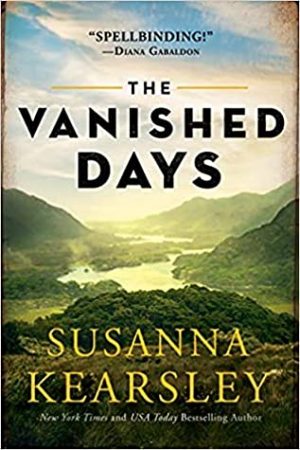 In the autumn of 1707, old enemies from the Highlands to the Borders are finding common ground as they join to protest the new Union with England. At the same time, the French are preparing to launch an invasion to bring the young exiled Jacobite king back to Scotland to reclaim his throne, and in Edinburgh the streets are filled with discontent and danger.

Queen Anne’s commissioners, seeking to calm the situation, have begun paying out money sent up from London to settle the losses and wages owed to those Scots who took part in the disastrous Darien expedition eight years earlier—an ill-fated venture that left Scotland all but bankrupt.

When the young widow of a Darien sailor comes forward to collect her husband’s wages, her claim is challenged. One of the men assigned to investigate has only days to decide if she’s honest, or if his own feelings are blinding him to the truth.

After reading Kaetrin’s lovely review of this book I almost feel like writing “What she said,” only I know I can’t get away with that. So I will refer readers to the blurb here and her review for the background details of the plot and I’ll jump straight into my thoughts. Yep, going second does have its benefits!

Unlike many of your other books the dual timeline of “The Vanished Days” is separated by less than a decade rather than by hundreds of years. Despite the fact that I will undoubtedly read more books with this more widely spaced sort of timeline, I must admit to being tired of so many recently written historical fiction books that make use of this device, usually with the modern heroine seeking to uncover some long held secret from the past. Ennui has crept in for me. When I realized that this book would not feature that, I rejoiced.

I loved the historical details and “feel” of the book. It has a leisurely pace which allows the story to slowly build in intensity. Readers need to set aside the time to savor this and be prepared to settle down and just let it happen. One thing I will let out of the bag for animal lovers is that the cat gets taken care of. Don’t worry about Lily’s cat. There is also just enough Scots dialect and period dialect to add verisimilitude without driving me batty. It doesna take lang for faux brogue to fash me (and fash can mean more than just worried – see here). One thing that I did begin to notice an excess of was total strangers being able to “read” Lily’s face and immediately divine her exact thoughts thus being able to give her solace and consolation – usually.

But I was glued to my seat reading to discover what’s going to happen next. There are details which I noticed hadn’t been supplied.

When and why did Lily begin to learn how to forge documents? Why is Barbara a prostitute and how was the decision made? Did Archie force/encourage her into it? What is this house on Paunchmarket – a brothel? What is Archie’s association with it?
It turns out there is a reason for that and I was glad I didn’t flip ahead to the end and have that spoiled for me. Patience is a virtue. I will admit that there are some characters I didn’t like – with good reason – and others who frustrated and angered me at times with what they did. But we were all young and stupid once, the characters who frustrated me matured and in the end, I could pretty much forgive them.

Like Kaetrin, I’m not going to go into many details of the plot beyond reiterating that this is a book to sip and savor rather than chug down like a glass of ice cold water after you’ve spent all day mowing grass in the hot sun. There are a lot of characters to keep track of, important plot details that you will discover are deliciously slipped in without fanfare and which will only become clear later on. If this didn’t take a spreadsheet of monumental proportions to keep straight while the book was being written, I’ll be astonished.

The book can be read without reading any of the others in the “Slains” series or “Bellewether” though if those have been read, it’s fun to see returning characters in roles of varying sizes. To end, I will quote a line that one character, who has many secrets to hold, tells another –   “All men do leave pieces out when they tell tales, it is no crime.” B+