Your book “Princess Furball” was recommended to me by etv13, one of our readers here, after I posted a review of the movie “Donkey Skin.” I instantly fell in love with the name since I have two little Princess Furballs at home. Well, I finally got my own copy of the book and after finishing it, I have to say it’s charming. 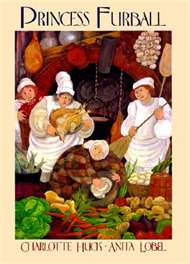 The story is not quite “Donkey Skin” and not quite “Three Nuts for Cinderella” but rather a blending of the two. And here the theme of incest is not included. Instead the King, who has ignored his daughter for years after his wife died, promises her to an ogre who will pay handsomely for her hand in marriage. But her beloved nurse, who thought of the Princess as a daughter, had made sure to see that the Princess was learned. So she grew up to be strong, capable and clever enough to think of a way out of the hateful marriage. Of course it involves a handsome Prince but also three beautiful dresses, three keepsakes from the Princess’ mother and a coat made of the hides of 1000 different animals. And naturally there’s a happy ever after plus one yummy looking wedding cake.

The illustrations by Anita Lobel remind me a touch of the Impressionists of the late 19th century and are colorful and skillfully done. I think any child would be enchanted by them and able to follow the story through them. The story is simply told though detailed all the same. And though I don’t want to get bogged down in PCness, it’s nice to see a Princess who is responsible for her own HEA who gets a Prince who recognizes that she is as clever as she is lovely. B+